LATEST NEWS
Home Sports Get out the broom: Hewitt-Trussville sweeps its way into the 7A baseball finals 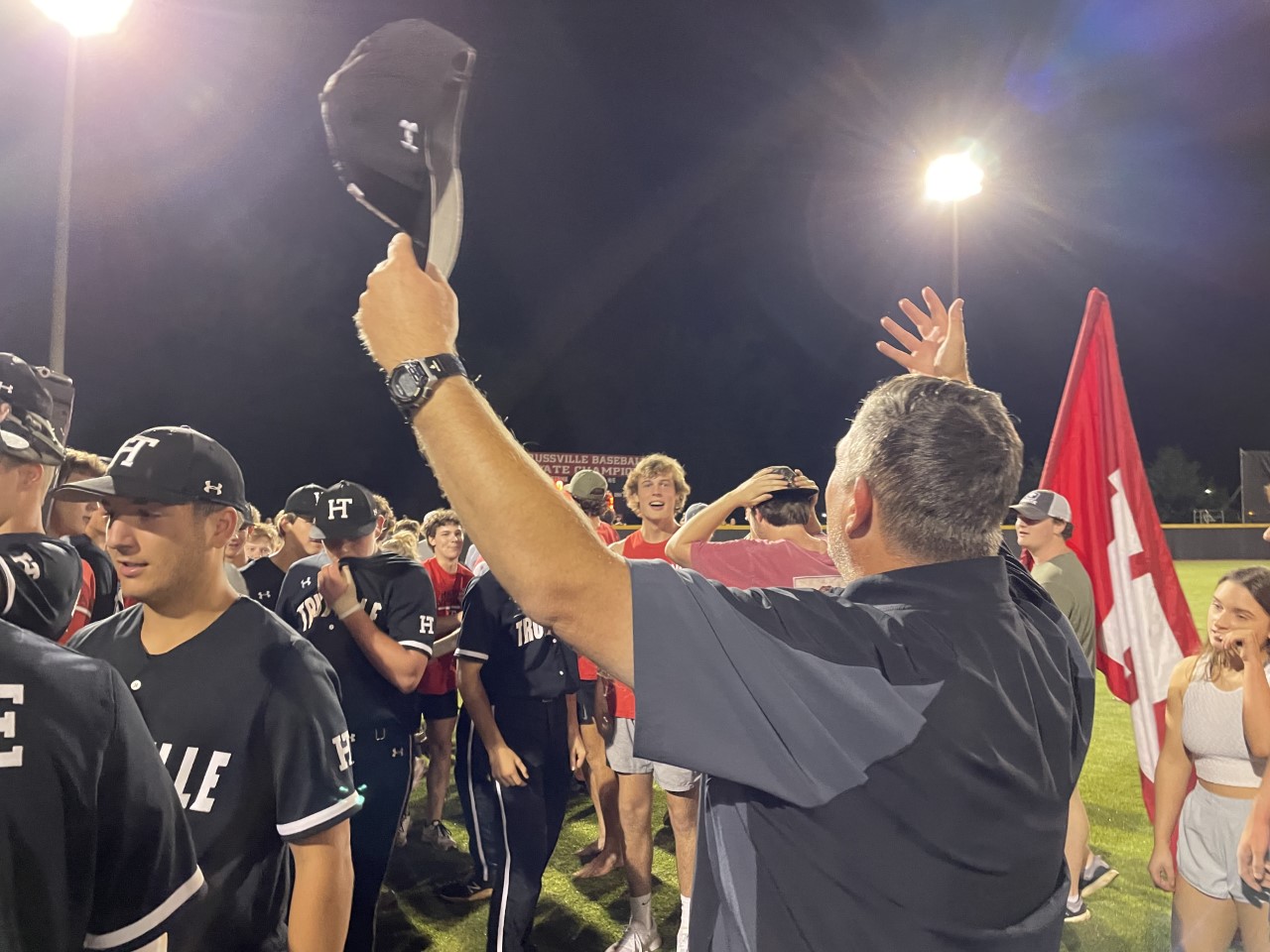 Hewitt-Trussville head coach Jeff Mauldin celebrates with his team and the Huskies' supporters on Friday, May 13, after a sweep of Vestavia Hills put the Huskies in the AHSAA 7A baseball state championship series. (Photo by Bobby Mathews)

Get out the broom: Hewitt-Trussville sweeps its way into the 7A baseball finals

TRUSSVILLE — Hewitt-Trussville swept Vestavia Hills out of the AHSAA 7A baseball playoffs here on Friday, May 13 and earned a spot in the state finals next week in Oxford. 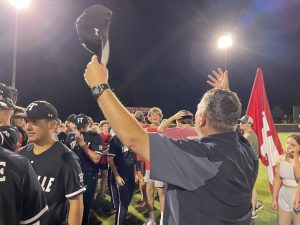 Hewitt-Trussville head coach Jeff Mauldin celebrates with his team and the Huskies’ supporters on Friday, May 13, after a sweep of Vestavia Hills put the Huskies in the AHSAA 7A baseball state championship series. (Photo by Bobby Mathews)

The Huskies manufactured enough runs to win the first game, a 4-0 victory that relied on Riley Quick’s pitching and some small-ball strategy on offense; and in a tight second game, Hewitt-Trussville broke it open late for an 8-2 win.

“God is good,” Hewitt-Trussville head coach Jeff Mauldin said after the win. “God has blessed our program with great players, a great coaching staff that helps me do everything we do, and look at all of the support we have here. We’ve got the Dog Pound here, the students, the parents. I guess the biggest thing is that God has truly blessed this program for us to be able to do what we do.”

There was joy on the field on Friday night, as the Huskies celebrated with teammates, family, friends and supporters. But there was also a sense that the mission is unfinished. The Huskies are ranked No. 1 in 7A, and this is a team that has been built to contend for a state championship.

“It’s one of the greatest feelings of all time,” Huskies outfielder Jack Ollis said. “I’ve only been on this earth for 17 years, and I promise you there’s nothing that’s gonna compare to this moment right now. I’m just sitting here soaking it in, because this is a once-in-a-lifetime opportunity … we’re gonna celebrate right now, but when Monday turns around, we’re gonna get back to work.”

The Huskies will play the winner of Central-Phenix City and Auburn, who split on Friday night and will play the tiebreaker on Saturday at noon.

Senior pitcher Riley Quick did what he does: He threw 13 strikeouts and held Vestavia Hills to 3 hits, and Hewitt-Trussville scored in four straight innings to put the game out of reach.

It could’ve been worse for the Rebels, as the Huskies left ducks on the pond with 10 runners stranded on base. Hewitt-Trussville totaled eight hits for the game, including a double from Brooks McRae in the seventh spot in the lineup.

“I just came out with the mentality of ‘trust Coach Mauldin, trust the fielders behind me,'” Quick said. “I have faith in them to make the plays, and I just wanted to throw strikes and give my team a chance to win. It feels amazing, but we’ve still got two more games to win. Once we get that job done, it’ll feel amazing.”

Logan Phillips came on in relief of Quick for the final two outs of the game.

The Huskies blew this one open in the top of the seventh, plating four runs and mowing down the Rebels in order in the bottom of the inning to clinch. But it wasn’t as easy as it looked.

The Rebels made it a game in the bottom of the fourth by plating a pair of runs to cut the Hewitt-Trussville lead to 3-2. But like any championship-caliber team, the Huskies answered. They added a run in the top of the fifth and then hammered Vestavia into submission in the seventh

This was — again — a case where things could have been much worse for Vestavia. Hewitt-Trussville scattered 11 hits over the course of the game and had the bases loaded in six straight innings to leave 14 baserunners stranded.

Baker Green allowed two runs on four hits and the Huskies stayed relentless at the plate. They scored in the first when Ethan Duhon walked in Brooks McRae for the first run, and then Riley Quick doubled in Matt Miller in the top of the third to make it 2-0.

A scary moment in the second game when a double steal brought Jack Ollis home for the Huskies. Vestavia’s third baseman, John Paul Head, was struck in the face on the throw, with the ball ricocheting almost all the way to second base. Head was removed from the game. Vestavia coaches reported after the game that he will be OK — but he’ll have a sore face for a few days.

Huge attendance for the Huskies-Rebels game. Hewitt Athletics estimates that there were 1,500-2,000 people in attendance for the event. Extra bleachers brought in for the game were full, and fans were crowded around the outfield walls all night.