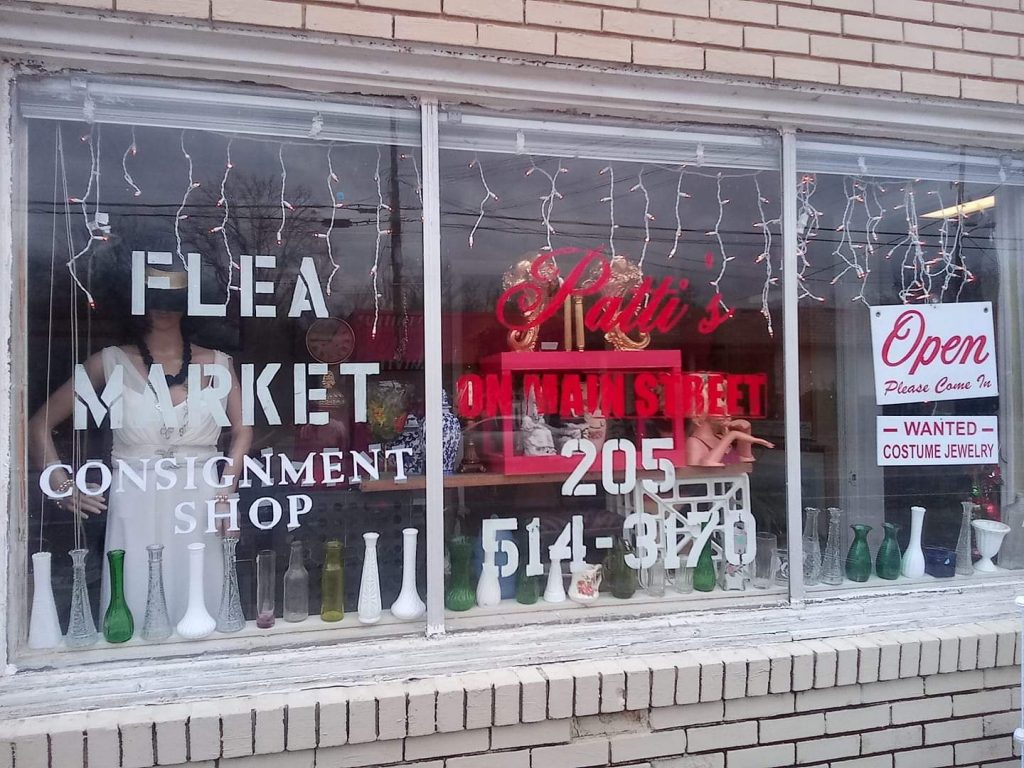 PINSON – Many people aren’t aware that Pinson, located in northeast Jefferson County, is one of Alabama’s oldest communities. Although the city of Pinson was not incorporated until 2004, the area was settled in the early 1800s, predating Alabama’s admittance as a state in 1819. 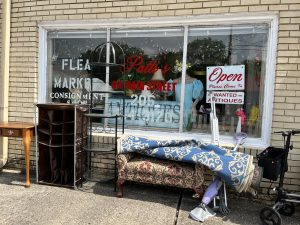 At the heart of the city, dotted with mom-and-pop shops in historic buildings, is a little street called Main Street. In recent years, Main Street has been all but forgotten as the city grew up around it. Many of the storefronts sat empty for years, due to both flooding and a lack of patronization, but in 2021, one Pinson resident decided to turn that around.

Patti and Tom left their lives in New York and moved to Pinson when they retired in 2000. They were already familiar with the area, having previously visited their son who lived and worked in Alabama.

It wasn’t long before Patti and Tom opened a flea market and consignment shop on Main Street, which only came naturally after a lifelong career working in antiques dealership in the Big Apple. The couple have been selling on Main Street for a total of 18 years, the last 14 years of which have been in their current building, located at 4281 Main Street, Pinson.

Patti’s on Main Street Flea Market and Consignment Shop has been a staple in the Pinson community, but the Covid pandemic and nation-wide shutdown in 2020 nearly put an end to business on Main Street. 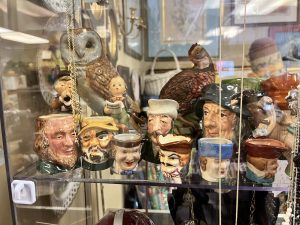 Some rare and unique finds at Patti’s on Main Street

Filled with a passion big enough to change the world, or at least the world around her, an idea started blossoming in Patti’s head: Pinson Trade Days, one day each month to draw people to Main Street to enjoy a slice of Pinson’s rich history while they shop, and even treat themselves to a hotdog and ice cream at Price’s.

“The pandemic just killed us, but not anymore!” Patti said. “I asked the mayor about Trade Days. He said we’ve got to get it approved … he was just wonderful about it. We got it approved with the council. We couldn’t do it without them.” 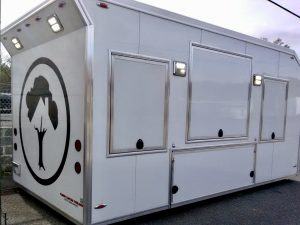 HomeTown Bank sets up a mobile ATM at Trade Days to proved shoppers with quick, convenient access to their money

The Pinson City Council gave Patti approval to hold Trade Days the first Saturday of every month. Trade Days officially launched in November 2021, and currently takes place eight months out of the year. Due to winter weather and conflicting events, at this time, there is no Trade Days in the months of January, February, May and October.

“We’re not going to do it in May because the city is doing CityFest at the Bicentennial Park,” Patti said. “We’ll pick right back up again on June 4, and then we’ll just go on until Butterbean Festival, because that’s the first Saturday (in October) so we can’t do it then.”

According to Patti, the first Trade Days “knocked it out of the park” and since then, many people have asked her how she knew what to do to make Trade Days such a success.

“Sometimes when you start something new, it takes a while to get going,” she said. “But because I pride myself on knowing a little bit about this business – because I’ve only done it 55 years – I put all antique dealers out there: flea market dealers, collectable dealers, farmers market dealers. We have vintage cars come here. We have the Hometown Bank bring an ATM machine here. We have the police close the road. We have the Porta Johns we have brought in here. And then, we give out free rent. It’s all free rent out there.” 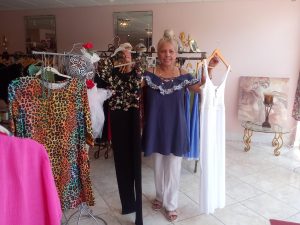 Why offer rent-free booths for an event that so far has drawn people from not only all over the state of Alabama, but all over the Southeast?

“I try to help everybody I can,” Patti said. “That’s why we do Trade Days. I love it. To me, it’s not work; it’s like Christmas every day.”

Patti said that there were shop owners on Main Street who had been behind on bills due to the pandemic, but Trade Days helped them catch up on their bills and saved their small businesses.

“That’s what we’re all about,” she said. “We’ve got to help people. It’s called payback time. We’re all in the same boat: nobody can afford food; nobody can afford gasoline. Everybody’s stressed out. Trade Days makes everybody happy, and they all get together here. Then, they go to Price’s Drug Store – hallelujah for Kevin (Nelson) – sit down and get a hotdog, get a banana split, splurge yourself. Who makes good banana splits? Nobody but Kevin.” 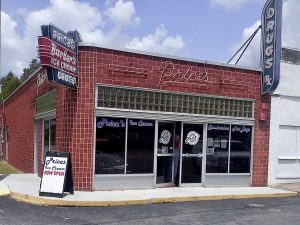 “With Price’s open now, he’s drawing in a lot of people that used to live here 40-50 years ago and had their first ice cream cone there,” Tom, Patti’s husband, said. “They’ve come (to Price’s), and then they’ve come in here saying it’s just so nice to see something still on Main Street.

“We’re doing the best we can, and the Trade Days has really been a big shot in the arm and a lot of the dealers that have done it have said it has helped them get caught up from a year-and-a-half of misery with the pandemic,” he added. “It’s made a big difference.” 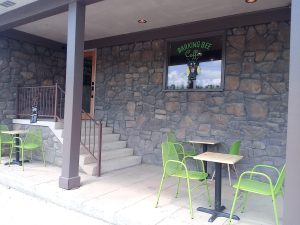 In addition to the local shops and dineries, Pinson Trade Days also features a farmer’s market and a vintage car show.

“I’m not kidding when I say we’ve knocked it out of the park,” Patti said. “Everybody loves it, we’re meeting all kinds of new people, and the street is all filled up. Everybody has so much fun they don’t want to go home … especially when the men are over there with those vintage cars and the women can come here and shop around, not just in our store (but) all the stores. Everybody is doing well.”

Patti said that all the buildings on Main Street are now rented, and thanks to Trade Days, the businesses are making money they weren’t making before.

“I love what I do, and it comes easy for me,” she said. “I feel that I’m blessed. I’ve been blessed so many times, it’s payback time.”