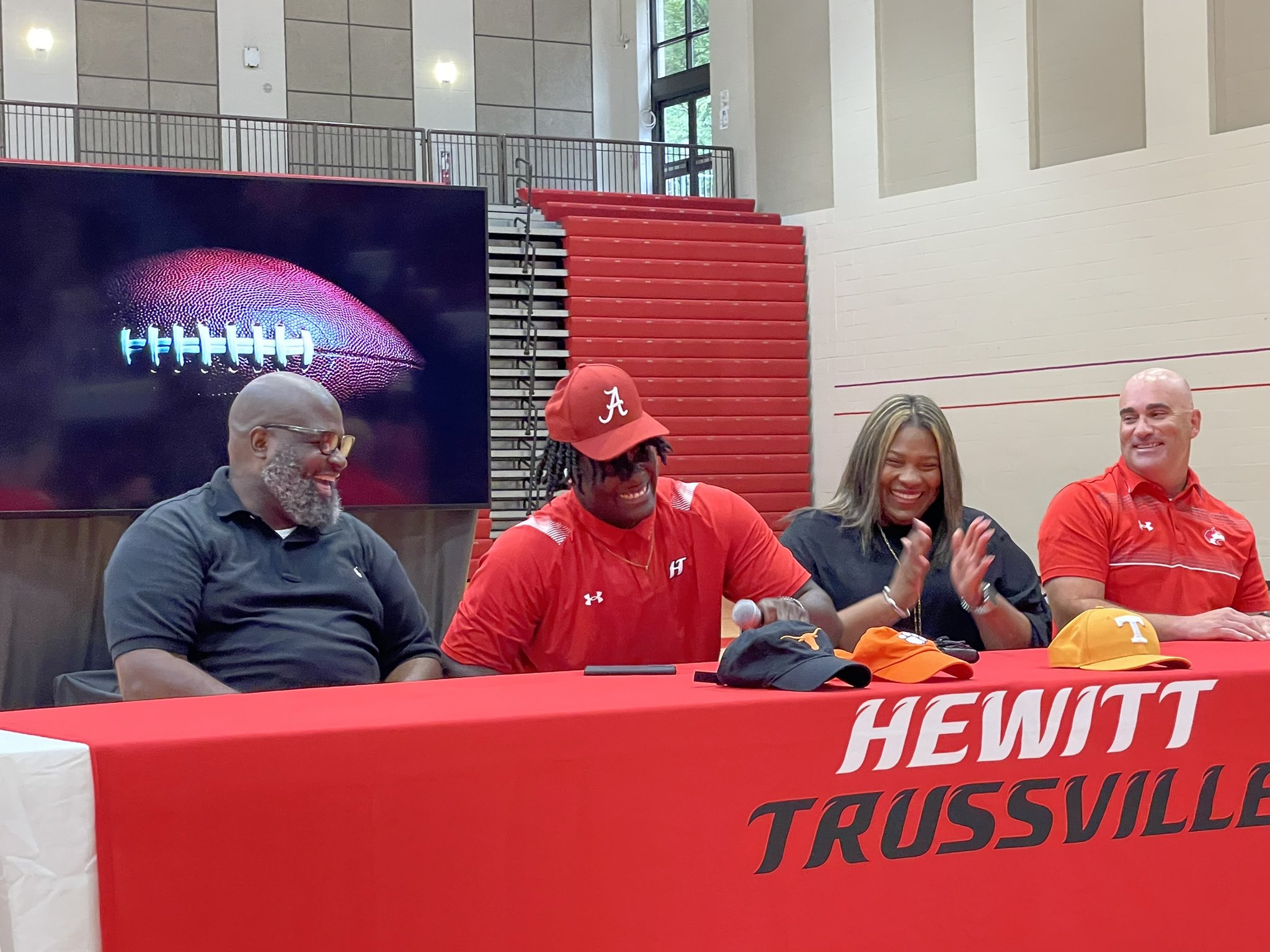 Hunter Osborne, his parents, and Hewitt-Trussville head coach Josh Floyd were all smiles as the Huskies' star D-lineman committed to play at Alabama during an announcement on Monday, August 1. (Photo by Bobby Mathews)

TRUSSVILLE — This was a moment Hunter Osborne had waited for. 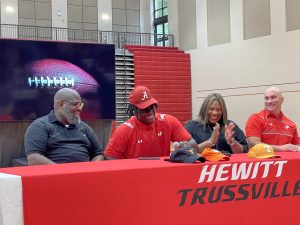 Hunter Osborne, his parents, and Hewitt-Trussville head coach Josh Floyd were all smiles as the Huskies’ star D-lineman committed to play at Alabama during an announcement on Monday, August 1. (Photo by Bobby Mathews)

The rising senior defensive lineman for Hewitt-Trussville had waited through much of his junior season to receive an offer from Alabama. Texas, Notre Dame, Auburn, Georgia and Miami were only some of the 53 FBS programs to offer the 6-5, 260-pound Osborne a scholarship.

The offer from the Crimson Tide finally came on January 22. Osborne made sure that the weeks and months waiting for it were all worth it on Monday, August 1, when he chose Alabama from a final four that included Texas, Clemson and Tennessee. In front of around 200 friends, family, classmates and supporters, Osborne lifted the crimson ball cap from the table in front of him and chose Bama.

“When the offer came through, it was go time,” Osborne said. “I had to look at all of my options, of course, and that’s what I did. But I always had Alabama in the back of my mind … this is a big opportunity for me, a big moment in my life.”

It has been a long journey for Osborne, who — though the Alabama offer was one that he wanted badly — still did his due diligence. He took his last official recruiting visit on June 24, to Tennessee. And after talking things over with his parents, going over the pros and the cons and everything in-between, Osborne made a decision that almost seemed inevitable. And it was a conversation with his mom, Patricia, that helped seal the decision.

“My mom is literally my best friend,” Osborne said. “That’s the one person I go to with everything. Me and her have talked about all this type of stuff. It was like, ‘do you agree with this, do you agree with that?’ And yeah, we butted heads on some things but we came down to the agreement that this is where I need to be. Alabama is my home.”

The stats tell part of the reason Osborne was such a sought-after commodity. In a junior season that saw Hewitt-Trussville go 9-3, Osborne had 35 solo tackles and 60 total tackles, 10 tackles for loss, 5.5 sacks and 16 quarterback hurries.

“I think he’s so tall and long,” said Huskies head coach Josh Floyd. “He has that God-given frame. But what makes him special is his work ethic. He’s put so much into this thing. He’s a humble kid. He’s hungry all the time, hungry for success. He wants to be great, and that sets him apart from a lot of guys.”

Osborne credited Hewitt-Trussville strength coach Brandon Herring for helping him put weight onto an originally lanky frame. When Osborne first showed up as a freshman, he weighed 150 pounds. Entering his senior season, he’s put 100 pounds on a frame that looks like it could carry more.

“Our development is huge here,” Floyd said. “It’s a huge part of what we do here. We start working with these guys when they’re in youth football and middle school weight program, like Hunter did. Coach Herring does a great job with our guys. It’s a big part of what we do here, and we take a lot of pride in it.”

Osborne is just the latest in a long line of Hewitt-Trussville players who have committed to playing FBS football and specifically in the ultra-competitive SEC. When Osborne hits the Capstone next season, he’ll see former teammates like Justice Finkley (Texas) and Omari Kelly (Auburn) on the schedule. The bonds between the Huskies, forged over the course of seasons fought in the trenches of the most difficult region in Alabama (7A Region 3), played into recruiting as Finkley and Kelly were extolling the virtues of their chosen schools to try to sway Osborne’s decision.

“They tried to, they definitely did,” Osborne said. “I mean, Justice, he and I have a tight relationship. We’re boys, you know they called us ‘the Bookends.’ I went down to Austin and got to hang out with him. He got to show me Texas from his point of view. I was like ‘Oh my gosh, this is going to be hard to turn down.’ And, like, Omari … and all of the Auburn boys, we’re tight. Every time I got to talk with them, it was like ‘This is going to be hard.’ And it was a tough decision, but I know I made the right one for me.”