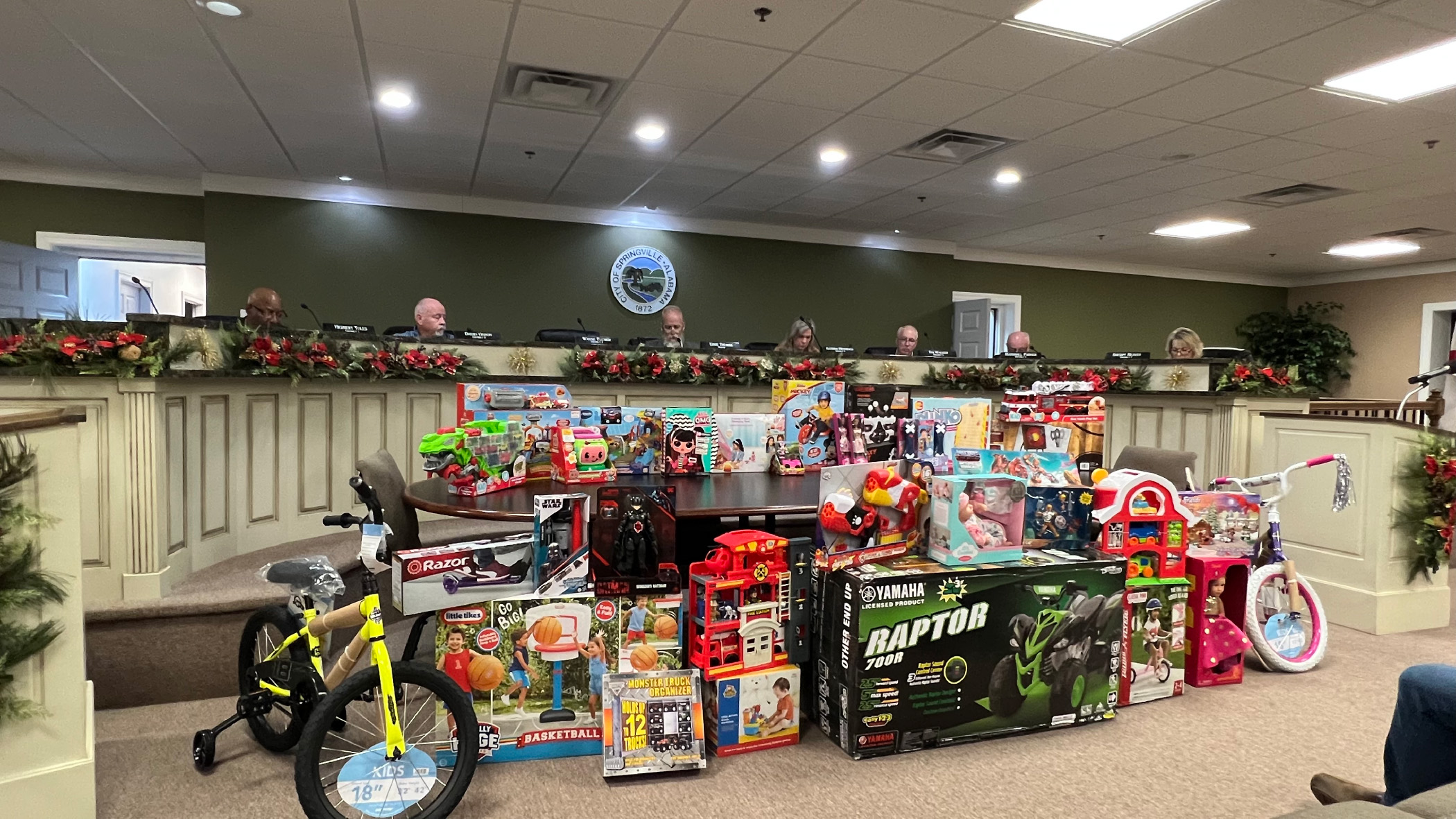 Some of the many toys gathered for local children this Christmas by Springville Police were on display during the December 5 meeting of the city council. (Photo by Terry Schrimscher)

Springville approves longevity pay in time for the holidays

SPRINGVILLE — The Springville City Council met Monday night, December 5, for the first regular meeting of December. Much of the discussion centered on the issue of longevity pay for city employees. 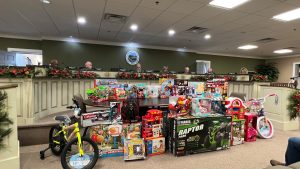 Some of the many toys gathered for local children this Christmas by Springville Police were on display during the December 5 meeting of the city council. (Photo by Terry Schrimscher)

Longevity pay was discussed in the November 21 meeting when Deputy City Clerk Kim Stone shared concerns from city employees regarding the new policy on longevity pay included in the recently passed personnel manual.

The new handbook was approved in August and took effect in October. It established a five-year threshold for longevity pay, which left many employees who received year-end bonuses in previous years without bonus checks in 2022.

“If you’ve ever been on the receiving end of having something taken away,” Mayor Dave Thomas said. “I think we have the appreciation to empathize.” Thomas expressed the concern of many on the Council, saying the new rules should be applied going forward without penalizing current employees who received bonuses under the old system.

After the November meeting, Stone calculated the impact of extending the bonuses to include employees grandfathered in from previous years.

Employees hired after the adoption of the new handbook will be subject to the five-year definition of longevity before receiving a bonus. The ordinance passed 6-1, with Tim Walker voting against it. During the meeting, Walker asked if all employees could be grandfathered in rather than only those who have been employed for six months or longer.

Longevity checks for qualifying employees are expected to be issued this week.

In the work session prior to the meeting, the Council heard a discussion on offering merit pay increases for part-time employees. The measure was not added to the agenda but is expected to be included as a resolution in the next meeting.

In other business, the Council approved a memorandum of understanding with Mt. Zion Baptist Church to use the parking lot at the church for Woody Park.

The Council also approved $387,000 for lighting at the multi-purpose sports fields. The resolution passed 5-2.

Attorney James Hill presented a request to purchase a new pickup for the Springville Police Department. Bids are currently being submitted. The Council approved the expenditure of up to $44,000 for the vehicle pending a suitable bid.

Police Chief Wayne Walton closed the meeting with an update on the Cops for Tots toy drive by showing some of the many toys gathered for local children. He said the department is still needing more bicycles of all sizes.

Springville will celebrate its sesquicentennial on Thursday night from 4 p.m. to 8 p.m. with a special ceremony downtown, including commemorative ornaments at local shops and a visit from Santa. In addition, the annual Christmas parade is scheduled for Saturday evening, December 10, at 6 p.m.

The next meeting of the Springville City Council is scheduled for December 19.