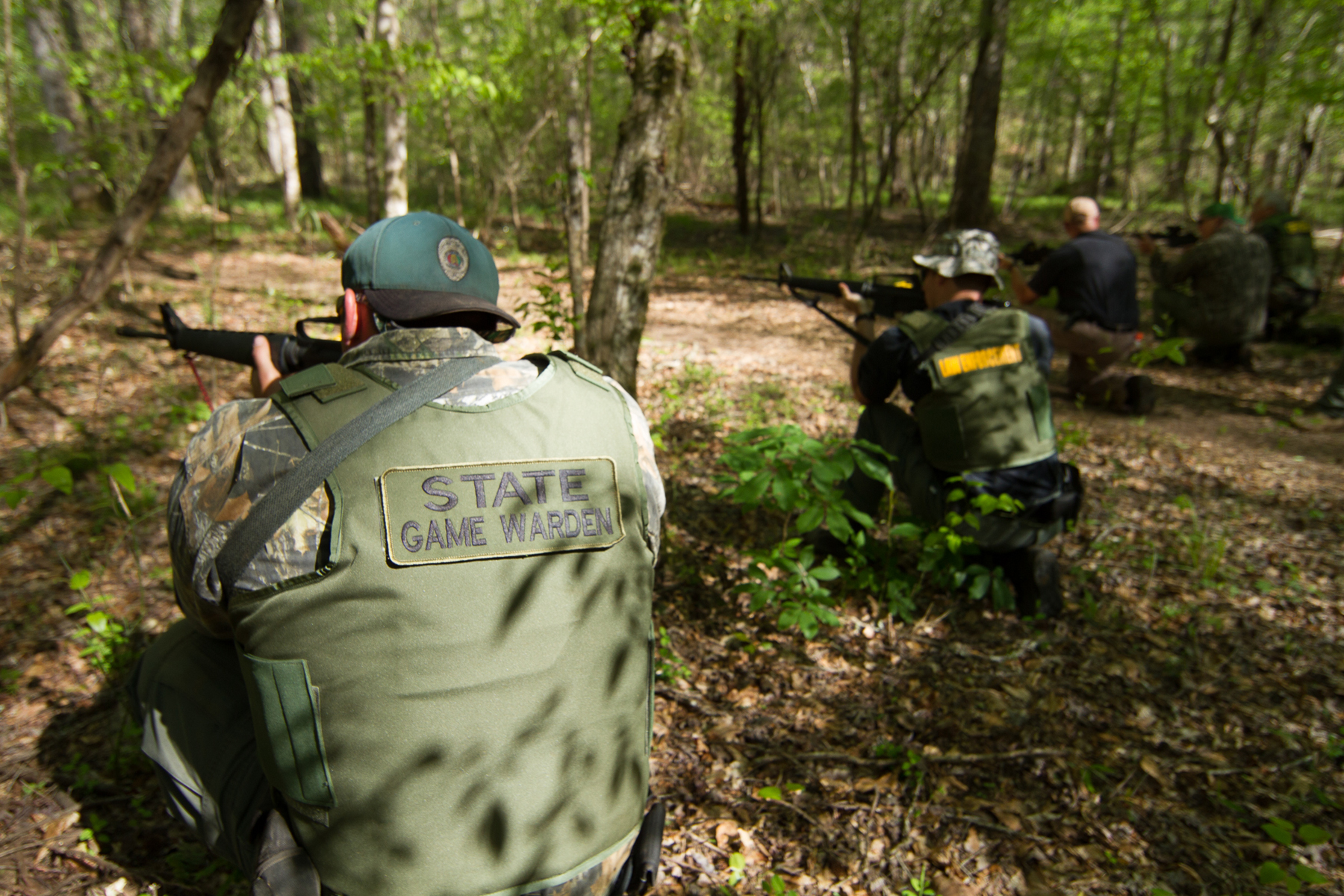 Posted By: Online Editoron: May 14, 2016In: Outdoors
Print Email

Sometimes they’re teased as squirrel cops and deer detectives. Fact is, most people don’t have a clue as to daily duties performed by an Alabama Conservation Enforcement Officer (CEO). 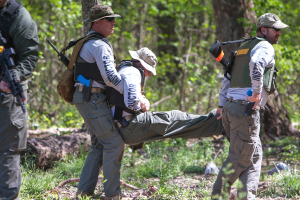 Some of the skills the course covered were how to quickly assemble a team and advance against the threat, how to subdue a perpetrator and how to evacuate an injured comrade. (Photo by Billy Pope)

When a CEO from the Alabama Department of Conservation and Natural Resources goes on duty, he or she is trained to handle a wide variety of enforcement tasks, some of which have nothing to do with wildlife or fish. It could be a domestic dispute, drug running or any number of illegal activities. The Alabama CEO has to be prepared for any and all of the above. And when a CEO performs wildlife-related enforcement, those being checked usually have firearms in their possession.

A prime example occurred several years ago in Geneva County when a 28-year-old man went berserk and killed 10 people before an Alabama Wildlife and Freshwater Fisheries  (WFF) CEO joined local law enforcement in their efforts to subdue the killer. CEO Joel Hendron was able to return fire with his semi-automatic rifle, which eventually caused the perpetrator to commit suicide.

Because Alabama CEOs could find themselves in any enforcement situation, training is the key to ensure readiness.

Two years ago, Alabama CEOs went through ALERRT (Advanced Law Enforcement Rapid Response Training), a two-day course that all law enforcement officers in the state must attend. It teaches fundamental techniques and tactics to respond to active shooter events inside buildings, whether it is in a school building, government building or office building.

“What was found through the years, and really the Columbine tragedy was the reason for the change, was that for years local law enforcement was taught to call SWAT teams,” said Capt. Matt Weathers of the WFF’s Enforcement Section. “But the response time for SWAT is so long the event is usually over with by the time they get there.”

Twelve students and one teacher were killed during the Columbine school shooting in Colorado in 1999.

“Now, enforcement officers are taught to get a small team together – two, three or four officers – and go on in to the sound of gunfire and stop the killing, trying to save as many lives as possible,” Weathers said.

That is why officers recently completed the training regimens to prepare them for any encounters. Just like many professionals, Alabama CEOs must obtain continuing education units (CEUs) to keep their accreditation with the Alabama Police Officers Standards and Training (APOST) Commission.

This spring, Alabama CEOs completed the course called ERASE (Exterior Response to Active Shooter Events). Weathers said ERASE is designed to complement the previous training by providing techniques to deal with a shooter in rural settings, where Alabama CEOs spend most of their patrol time. 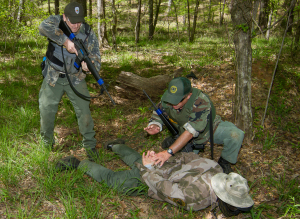 Conservation Enforcement Officers with the Alabama Department of Conservation and Natural Resources recently completed the ERASE training course to learn additional skills and techniques for enforcement actions in open or wooded areas. (Photo by Billy Pope)

“This training is geared more to what our guys do on a day-in and day-out basis,” said Weathers, who is qualified to conduct both ALERRT and ERASE training. “This would make our guys safer in their jobs. It would give them techniques and tactics to make them safer.

“Realistically, it makes everybody safer. The more our guys are trained for incidents that occur in rural settings the better. Very often, our guys are the first officers to these scenes. And we’re not just talking wildlife laws. There are a lot more things going on in the woods than just hunting violations. Our guys sometimes end up in the middle of that.”

Weathers set up the training through Russ Clagget, who heads up the ERASE program for ALERRT in San Marcos, Texas.

“Russ volunteered to send a team, himself included, to Alabama for our first two classes at their expense,” Weathers said. “The training takes three days, and it’s incredibly complex to conduct. There is zero down time. Our guys would usually eat lunch standing up, and then it was right back to training. Russ sent us all the firearms used in training, all the protective gear, the simunition rounds (paintball rounds), all the equipment that was needed.

“On top of that, they left one of their instructors behind to help our instructors train the rest of our officers. It took us five sessions to get everybody through it. We had some Alabama State Troopers and Dallas County Sheriff Deputies with us, too.”

Weathers said the training would run the CEOs through different scenarios that might occur during the course of their patrols.

“They teach you a skillset,” he said. “It might be something as simple as how to set up your equipment in your vehicle. Where is your rifle? Where is your go bag with extra ammunition and medical supplies. Then they go into force-on-force scenarios where you apply those skills. Basically, a bad guy attacks you.”

One of the scenarios used in the training is that a person with a handgun is spotted at a local state park. He’s walking by people telling them he is going to kill them. The training includes gathering a quick team and applying the techniques to stop the threat.

“These situations occur very commonly,” Weathers said. “People go off the deep end. We had a situation recently in Cullman where this guy starts driving around in his car shooting at people. Then he stopped his car and was shooting at passersby. Then he ran off into the woods.

“The officers who took that guy into custody had to display exactly what we were just taught to do. They had to do it without the benefit of the latest training, so this gives us an edge, very specific to what we do.”

Weathers said the ERASE training is based heavily on medical techniques for injuries that occur during an active shooter situation. Each trainee was given a tourniquet at the start of the course and was instructed on how to apply and when to apply the tourniquet. Training includes how to remove an injured person from an active shooter scene.

“But this technique not only applies to active shooter events,” he said. “Our guys are routinely responding to hunting accidents. A lot of these places where people fall out of trees or accidently shoot themselves are not places where you can drive right up to them. This better equips our people to save lives.

“Ours is not the most dangerous profession, but when our guys get in a situation, it’s usually abnormally bad.”

While most of the training occurred outdoors, Weathers said part of the course included watching officer-involved videos of encounters where the ERASE training would have helped. More than half of the videos involved game wardens from different states.

“You can look back at the Geneva shootings, where Officer Hendron did nothing short of saving the day by stopping an active killer,” Weathers said. “This training is geared specifically toward those type situations. It’s not the time to learn new skills in the middle of a gunfight.

“And it’s getting more and more dangerous every day out there.”

Weathers said all CEOs completed the ERASE training, and the feedback from those attendees was overwhelmingly positive.

“This was absolutely the highest rated training in my memory in the 18 years I’ve been here,” he said.