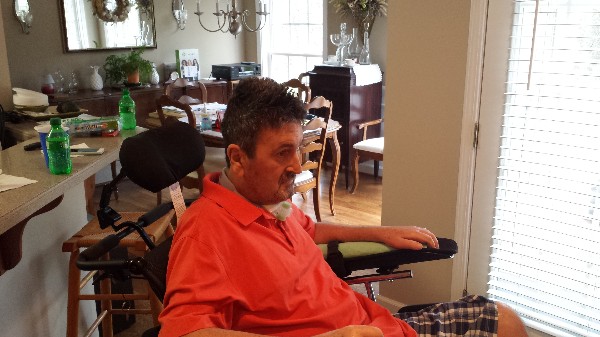 TRUSSVILLE — Locked In Syndrome is medically defined as a condition resulting from a stroke that damages part of the brainstem, in which the body and most of the facial muscles are paralyzed, but consciousness remains and the ability to perform certain eye movements is preserved. 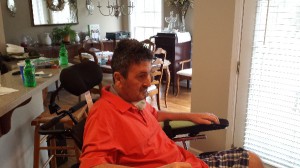 One Trussville resident, Eddie Paliescheskey, is what some would call a medical miracle after surviving a brain stem stroke in January of 2015. According to his brother, Joe, Eddie worked at Gadsden Regional Hospital, and went home not feeling well the day of his stroke. Eddie called their mother to let her know he wasn’t feeling good and was going home, and it was at home Eddie had his stroke.

“Luckily we made contact with a neighbor who was witness, and she called 911 and he went back to Gadsden Regional,” said Joe.

Joe said that the prognosis was grim to begin with, as the brain stem stroke Eddie had leads to Locked In Syndrome for many.

After a few weeks at Gadsden Regional, Eddie was transferred to the Shepard Center in Atlanta, which according to Joe, was the only facility that would take someone with Eddie’s condition. While at the Shepard Center, Eddie did weeks of physical and occupational therapy, and was scheduled to come home when he went into an SP2, getting a blood infection and subsequently delaying his homecoming.

Eddie went into septic shock multiple times, which Joe said almost killed him, before he was finally transferred back to Gadsden Regional, his family hoping he would soon come home.

“When we returned to Gadsden Regional, they were set up to do a terminal wean,” said Joe. “We convinced the doctors and staff that Eddie was going to come home, and they finally adhered to our wishes and Eddie came home June 24.”

After managing multiple Arby’s restaurants in the Trussville area since 1991, Joe Paliescheskey had retired and was prepared to sell his own home and move into his mother’s home to help give Eddie the around the clock care he needed. In addition to care from Joe and their mother, a group has formed to fight on Eddie’s behalf, called Eddie’s Army. Whether it be neighbors who have known the Paliescheskey family for years, or high school friends of Eddie’s reconnecting with the family, support has poured in from all over. The family also has a Go Fund Me ccount for expenses.

Eddie’s Army is a group of people across the nation and even some outside of the country that rally around Eddie in prayer, while also offering the family gifts and other essentials to make life for all easier.

The most recent local fundraising effort took place in the form of a yard sale in the Pilgrims Rest subdivision on May 21. The primary use for the funds will go to advance communications that Eddie is able to have with others. Although Eddie’s family has mastered communication with him, they are looking to get him an advanced communication device that would allow him to grab a cursor with his eyes and spell out words, so he can more adequately convey his needs.

Joe said the yard sale raised in excess of $1,000, with almost every neighbor donating 1-2 items that would typically sell for $10 or more at a yard sale. Some neighbors even brought big-ticket items, like furniture and electronics, or items that were brand new.

“It’s never ending, it’s so much selfless acts from people who don’t even know us at all or friends, or friends of friends and have maybe met Eddie once in their lives,” said Joe.

While many offer tangibles such as a fireplace and fireplace tools for Eddie to enjoy the warmth, or whether it be a hot meal, Joe said there also isn’t a day that goes by that the family doesn’t get an anonymous check in the mail.

Joe said that childhood friends of Eddie have been hosting fundraisers on his behalf, including a yard sale and a bake sale in the Pennsylvania area.

“The neatest thing about them is it’s brought a lot of them back together that have lost contact over the years,” said Joe.

The Paliescheskey family is active at the Holy Infant of Prauge Church in Trussville, and Joe said Eddie’s condition also brought people back in touch with their faith.

“It was amazing how people would say, ‘it’s been years since I’ve prayed with my kids,’” Joe said. “People told me they’d lost their way with church and when they saw the movement they started attending again with their family because they saw the miracles. We believe and we’re steadfast and his results have shown it.”