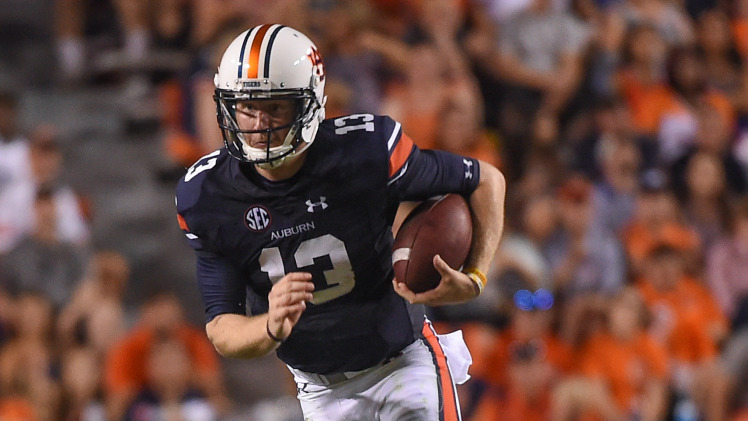 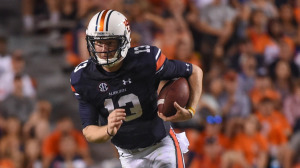 Sean White has Auburn on the go in a win over Arkansas State. Photo by Dakota Sumpter/Auburn Athletics

AUBURN, Ala. – Auburn’s offense is alive and well and, last seen, scoring just about every way possible Saturday night in Jordan-Hare Stadium.

The Tigers blasted Arkansas State 51-14, rebounding from a season-opening loss to No. 2 Clemson when the offense couldn’t find its way.

The offense found its way against Arkansas State with old-school rushing, steady passing from Sean White and even a fake field goal that went for a touchdown. Auburn had 706 yards of offense.

The defense was steady when it mattered, repeating the solid performance it had in a 19-13 loss to Clemson.

Coach Gus Malzahn, who played three quarterbacks in the opener, turned to White, who directed Auburn’s first eight scoring drives. White only came out when his helmet popped off, and for a few direct snaps to Johnson, before John Franklin III took over with Auburn leading by 34.

White capped off his big night when he scrambled to his right before throwing an 8-yard touchdown pass to Tony Stevens to make it 48-14.

Auburn will look to carry that momentum into its Southeastern Conference opener against Texas A&M at 6 p.m. next Saturday in Jordan-Hare.

How did Auburn do it in the first half when it streaked to a commanding 38-7 lead? With White passing, the rushing of Kerryon Johnson and Kamryn Pettway and a fake field goal that turned into touchdown run for kicker Daniel Carlson.

Auburn’s first half set the tone with two 100-yard rushers, a one-handed highlight-reel catch by Kyle Davis, and a Johnson 47-yard touchdown run when he started this way, but ran all the way that way to reach the end zone.

Oh, a falling-down White flipped him the ball at the last instant to send Johnson on his way.

Did we save the best for last? Sure we did.

Carlson, one of the best kickers in America, scored on 20-yard run when holder Kevin Phillips flipped the ball over this head to Carlson darting to right. Touchdown Auburn.

Auburn finished the first half with a whopping 452 yards. Kerryon Johnson had 103 of those rushing. Kamryn Pettway, who didn’t get a carry in the opener, had 101 more.

White hit 10-of-14 passes for 173 yards and two touchdowns. Auburn converted 7-of-8 third-down tries in the half.

Auburn kept it up to start the second half, scoring on a 37-yard Carlson field goal to make it 41-3. Carlson kicked another one midway through the fourth quarter to make it 51-14.

Check back here for comments from coach Gus Malzahn.