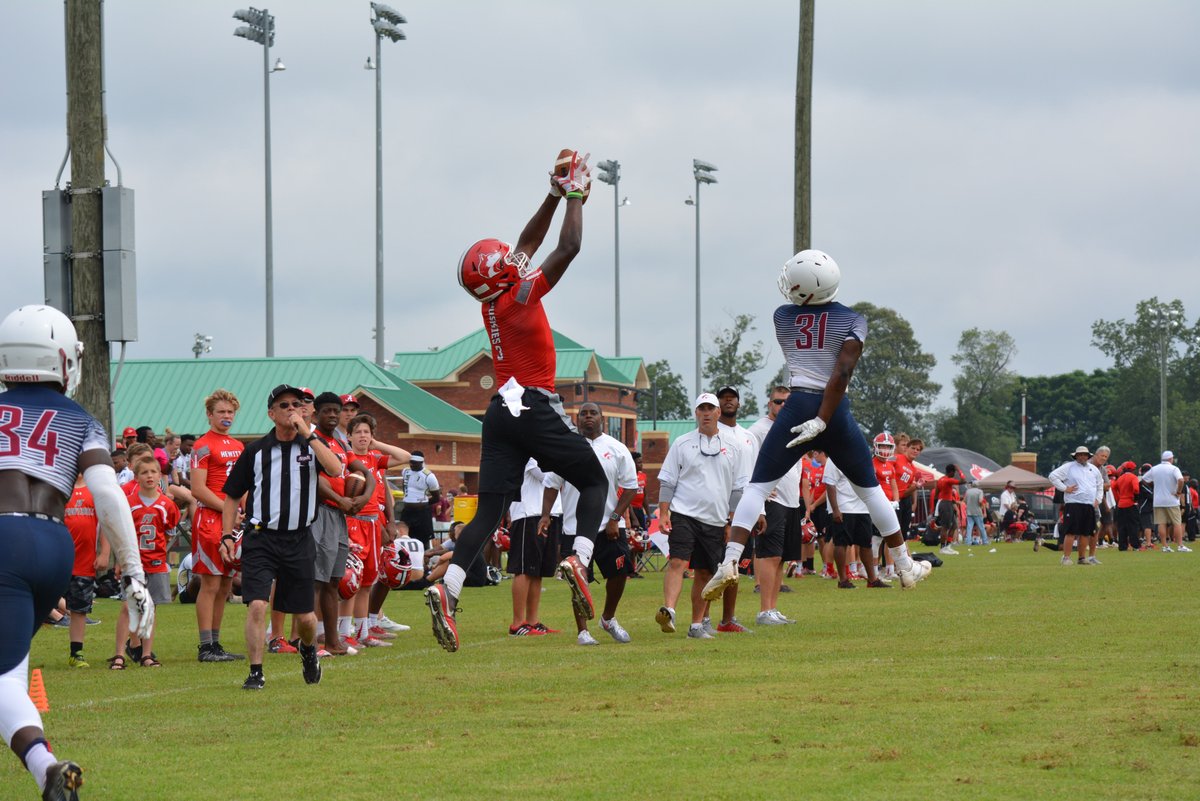 Hewitt-Trussville’s Logan Pitts goes high to make a catch in the ALFCA 7on7 regional championship in Montgomery on Thursday.

Hewitt-Trussville battled Hoover to a one-point decision before being eliminated at the USA Football/Alabama Football Coaches Association’s 7on7 regional championship on Thursday in Montgomery.
The Huskies pulled within a point of the Bucs late and chose, as they did in a National Championship Game against Hoover a year ago, to go for two points to pull out the win. As happened did then, the play failed, leaving Hewitt down 22-21.
However, the Huskies looked as if they’d picked off a pass to win the game, but pass interference was called.
The Huskies went 4-1 in pool play, sitting behind only Thompson (5-0) in morning play to be the No. 5 seed. In the bracket round, Hewitt beat Jeff Davis 19-11 before dropping the 22-21 contest to No. 4 Hoover.
Hoover then lost 29-26 to No. 1 Thompson, which went on to take the championship by beating Sidney Lanier 26-16.
“I thought we played pretty well most of the day,” Huskies coach Josh Floyd said. “Overall, it was a good experience. We don’t make up some new offense for 7on7. We run our actual offense that we run in the fall when we go to these tournaments so it benefits us the most once it gets to the season.”
Thompson went unbeaten through pool and bracket play.
Hewitt’s results for pool play:
Hewitt 23, Phenix City-Central 7
Hewitt 22, Park Crossing 18
Hewitt 25, Jeff Davis 6
Hewitt 25, Northridge 9
Thompson 36, Hewitt 20
In the other pool, Hoover, McGill-Toolen and Sidney Lanier each went 4-1, but in bracket play, Opelika stunned McGill 39-31 to bounce them from championship play. Sidney Lanier then beat Opelika to move to the final against Thompson, which was very impressive though the day. The Warriors, coached by Mark Freeman, beat every opponent on the day by at least 10 points except for a 29-26
win over Hoover in the semifinals. Thompson’s quarterback is Taulia Tagovailoa the brother of Alabama quarterback
Tua Tagovailoa. Thompson’s Tagovailoa, who will be a junior this fall, already has offers from Alabama and Oregon.
Some of these teams will be vying for a USA Football National Championship when the series holds its Hoover event July 13-15. Hewitt-Trussville, Thompson, Hoover and McGill-Toolen are all in that massive 40-team field.
The Hewitt ninth-graders competed in a ninth-grade/JV competition. The Hewitt freshmen beat Hoover 33-24 before losing to McGill 31-7 in the championship.
“It was great for them to get reps also,” Floyd said of the young Huskies.
In the 1A-5A varsity tournament, Greenville took the title, beating Andalusia 20-11.