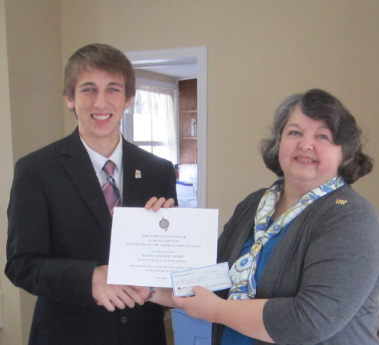 The Josiah Brunson Chapter of the Daughters of the American Revolution is proud to announce Bailey Coleman Wood as their 2016-2017 winner of the DAR Good Citizen Essay Contest Scholarship Award. His essay was chosen by an objective, independent panel of three judges.

Bailey and his mother, Kelli McConnell attended a program in his honor at a meeting earlier this year. Bailey read his essay and shared his future college and career plans. After the certificate and award presentation by Lynne Williams, a reception followed.

The contest is open to seniors of the area high schools. Information about the 2017-2018 DAR Good Citizen Contest and Essay Contest will be sent to senior high school guidance counselors in early September.