Birmingham man arrested for breaking into house to hide from deputies

BIRMINGHAM – A 26-year-old Birmingham man was arrested on Monday following a short chase in western Birmingham.

At about 11:15 pm on Monday night, a deputy on his way home from work traveling along I-59N near Fairfield spotted two cars driving recklessly. One of the occupants fired shots at the other car. The deputy activated his emergency equipment and signaled the shooter to pull over. The driver refused and a short chase ensued. 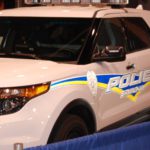 The chase exited the interstate at Ensley Avenue and continued to Pike Road where the suspect vehicle wrecked. Two men got out of the car and fled on foot.

A perimeter was set and a Sheriff’s Office K9 tracked one the suspects to a vacant house on 26thStreet in Ensley. Deputies and Birmingham Police surrounded the house and ordered the suspect to come out. The suspect surrendered. A search of the car revealed cocaine, methamphetamine, heroin and prescription narcotics. The second suspect was not located.

The captured suspect was arrested and is being held in the Jefferson County Jail pending formal charges.

The victim vehicle was not located and it is unknown if anyone was injured by the shots fired.