Ivey announces she is running for governor 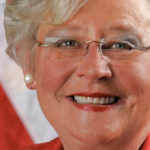 Gov. Kay Ivey, 72, announced today she is running for governor of Alabama.

Ivey filed paperwork to form a principal campaign committee on Aug. 18, a required move that typically signifies the start of a political campaign.

Ivey, a former state lieutenant governor, became Alabama’s second female governor in April after she was sworn in to fill the unexpired term of Gov. Robert Bentley following the disgraced governor’s resignation.

Prior to serving as lieutenant governor, Ivey, Alabama’s 54th governor, was the state treasurer from 2003 to 2011.

The state’s first female governor was Lurleen Wallace who served from 1967 until her death from cancer in 1968.