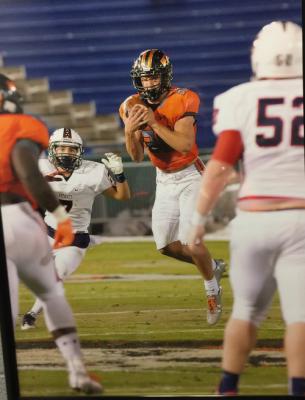 Ben Abercrombie, the former Hoover High School football player who was fully paralyzed when he suffered a severe neck injury during a Sept. 16 game between Harvard and Rhode Island, on Wednesday received a phone call from Alabama head coach Nick Saban. 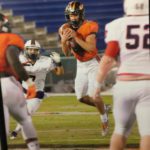 Saban told Abercrombie his thoughts are with the freshman Harvard player who was hurt whle making a tackle during his team’s first game of the season. Now, Abercrombie is in a critical care unit at a Providence, R.I. hospital where he underwent emergency surgery after he was injured.

While he continues to recover, Abercrombie’s friends and family got some optimistic news when they learned Ben had regained some feeling in his arms and legs.

“Ben’s lungs have continued to improve even though he is still battling some congestion,” Marty wrote on a page at CaringBridge.com  “Ben has started the weaning process from the ventilator and has done well. Ben is also regaining some feeling in his arms and legs. Praise God!”

Marty also wrote today about his son’s conversation with Saban.

“Coach Saban called Ben today to encourage him and let our family know that everyone back in Alabama is thinking of us and ready to assist us during Ben’s recovery,” he wrote.

“Coach Murphy at Harvard calls us everyday to encourage us and to ask Sherri and me what we need while we are away from home,” Marty says.

Ben has also received support from a former member of the New England Patriots and alumni of his high school  team.

“Pete Brock from the Patriots alumni group stopped by again today to motivate Ben and gave him a package of gifts from the Patriots,” Marty wrote on the website. “Ben received inspiration last night from a video Coach Niblett shared of a special prayer for Ben at the Hoover Bucs Men of Will prayer group.”

Now, the Abercrombies are seeking support from others through prayer.

“We ask everyone to keep praying that Ben makes a successful transition to breathing without assistance,” Marty wrote.”Then we will shift focus to the paralysis.”

A one-day campaign to raise money to help the Abercrombies with their medical expenses titled “Stand UP For Ben” was formed recently. On Monday more than 70 Biringham-area restaurants donated a portion of their ” sales to fundraiser.

According to a Facebook page created for the effort, more than $30,000 was raised to help the Abercrombie family.