National Football League Commissioner Roger Goodell released a memo today saying that all teams in the league should stand for the national anthem. 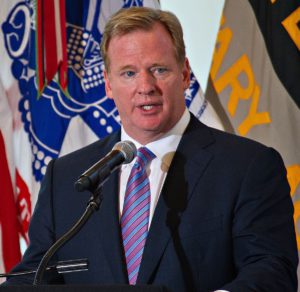 “We live in a country that can feel very divided. Sports, and especially the NFL, brings people together and lets them set aside those divisions, at least for a few hours,” he said in the memo. “The current dispute over the National Anthem is threatening to erode the unifying power of our game, and is now dividing us, and our players, from many fans across the country.”

Controversy has boiled in recent times over athletes such as former San Francisco 49ners quarterback Colin Kaepernick, who refused to stand for the playing of “The Star-Spangled Banner” in 2016.

In September, Bruce Maxwell became the first Major Baseball League player to kneel for the anthem.

These acts were done to protest what they perceive to be unjust treatment to racial minorities, namely by policemen. They have been supported by some and condemned by others. In the memo, Goodell said that the controversy over the protest is a “barrier.”

“Like many of our fans, we believe that everyone should stand for the National Anthem,” he said. “It is an important moment in our game. We want to honor our flag and our country, and our fans expect that of us. We also care deeply about our players and respect their opinions and concerns about critical social issues. The controversy over the Anthem is a barrier to having honest conversations and making real progress on the underlying issues. We need to move past this controversy, and we want to do that together with our players.