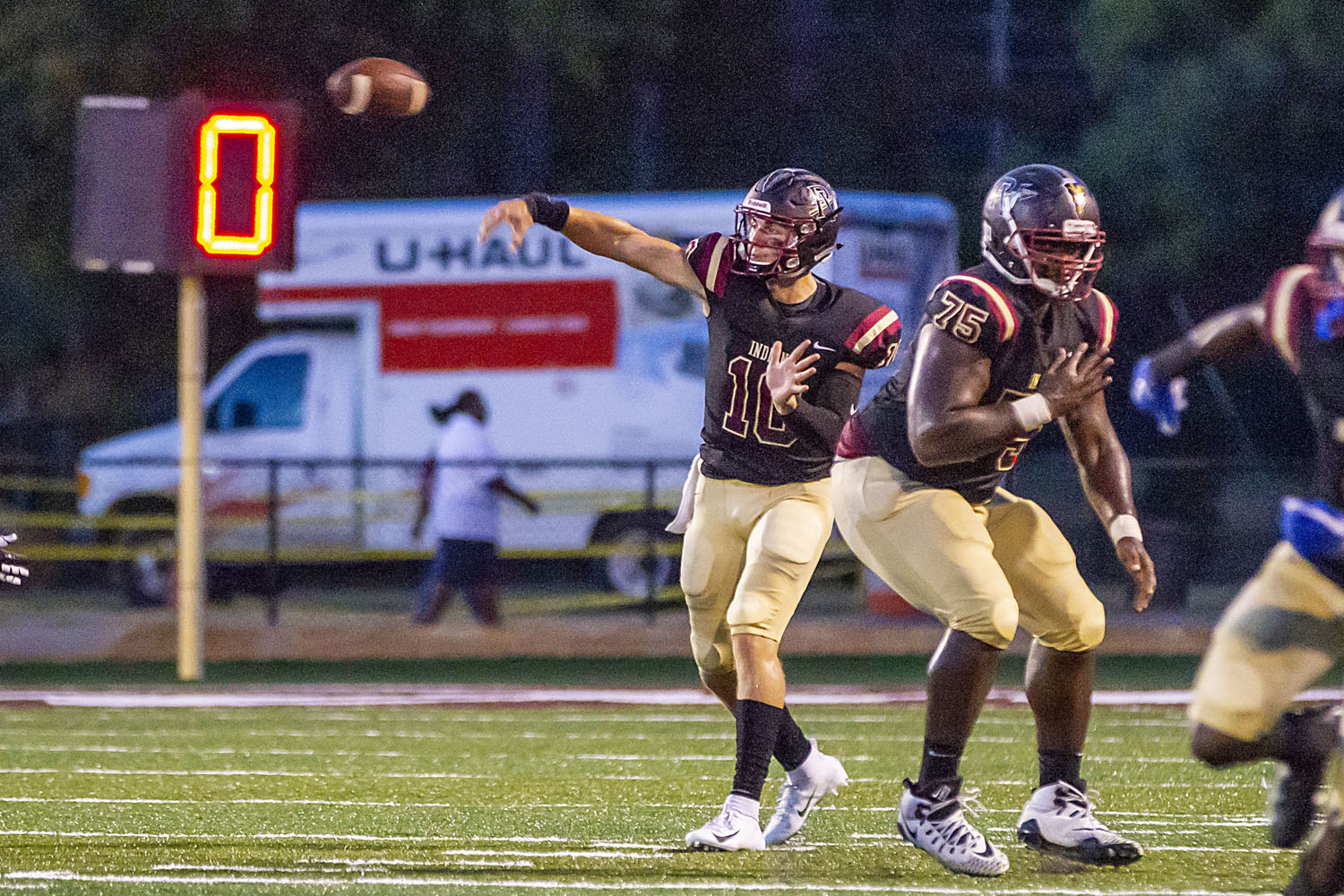 PINSON— After a week off, Pinson Valley returned to action on Friday night for Homecoming as they hosted Gardendale at Willie Adams Stadium. Thanks to two defensive interceptions and another great outing by the Indians offense, Pinson Valley rolled to a 42-7 win over the Rockets and add their fifth straight win of the season.

The Indians scored first after a botched handle by Gardendale punter Goose Crowder that forced him to take off running deep in his own territory. The Indians began the drive at the Rockets 29-yard line. Four plays later, Bo Nix ran it in from one yard out to give the Indians a 7-0 lead in the first quarter.

With less than seven minutes to go in the second quarter, Gaquincey McKinstry picked off Crowder and returned the interception 59 yards to extend the Indians lead to 14-0. Gardendale then picked off Bo Nix deep in Indians territory late in the second quarter to set up their only touchdown of the night. Seven plays later, Crowder scrambled for four yards and the touchdown, cutting the lead to 14-7 heading into halftime.

First, Nix hit Demarion Holloman for an 11-yard touchdown to extend the lead to 28-7. Three minutes later, Nix hit Keyonteze Johnson on a 57-yard touchdown throw to make the score 35-7. Running back Kendarius Henderson topped off the scoring frenzy with a two-yard touchdown run with 2:45 to go in the game to give us our final, 45-7.

Bo Nix was 11-of-24 for 240 yards and three touchdowns while adding 34 rushing yards on four attempts and a rushing touchdown. Jay Sharp lead all rushers with 11 attempts for 55 yards on the ground. Keyonteze Johnson lead all receivers with six receptions for 156 yards and one touchdowns. For the night, the offense tallied 361 yards of total offense at 7.7 yards per play and 18 first downs on the night.

The defense held strong once again forcing two interceptions to go along with five sacks on the night. The Indians gave up just 137 yards of total offense to Gardendale on the night. McKinstry had both interceptions while Antoine Williams and Dorian Henderson lead all tacklers with 4.5 tackles each. Williams also added a sack to his stat line as well.

When asked about his teams performance tonight, Pinson Valley Head Coach Patrick Nix said “The biggest thing is we didn’t have any penalties in the second half. Seemed like every time we turned around in the first half. We would make a big play and then next thing you know we would be 1st and 15 instead of a touchdown.” The Indians were flagged seven times for 75 yards in the first half. Nix went on to say there was “No surprise on how well our defense played tonight. They’ve played well all year and they’ll continue to play well all season long.”

Pinson Valley will go on the road to Huffman next week.