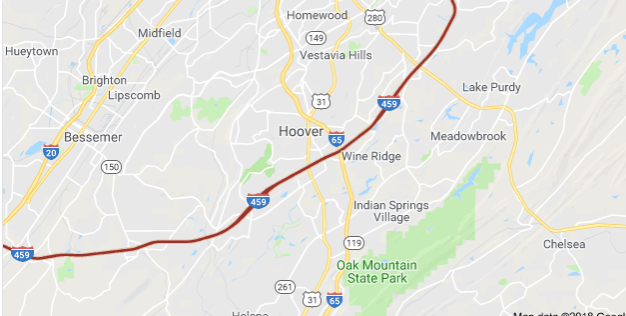 Police close I-459 due to protesters

UPDATE: After being shut down for about an hour, traffic is moving again on I-459 in Hoover.  Several exits between Highway 31 and I-65 are still closed, according to WBHM.

HOOVER — Police were forced to close Interstate 459 in Hoover, along with several exits, on Tuesday night, after a group protesting the shooting death of Emantic “EJ” Bradford marched into the roadway, according to WBHM. Some protesters have also driven onto the interstate and exited their vehicle.

Multiple vehicles are stranded due to the marches refusing to yield the road to traffic. Traffic is being diverted from I-459 as far south as Highway 150. Hoover Police, along with Jefferson County deputies, are trying to disperse the protesters.

The protesters first marched through the Walmart in Hoover before making their way to Buffalo Wild Wings where that chanted “no justice, no peace” and “shut it down.” Tuesday night marks at least the fifth night of protests.

Tuesday night’s group of protesters appeared to be significantly larger that the previous groups.

Early today, Carlos Chaverst, the leader of many of the marches, announced the name of the officer who he believes shot Bradford. The Trussville Tribune will not publish the name because the officer has not been identified by any official sources at this time.

@HooverPD have blocked several exits on 459 so protesters are getting out of their vehicles… pic.twitter.com/jSKrBPuzLl

@HooverPD officers are now joined by Jefferson County sheriff deputies to escort protesters off of 459 but vehicles are still parked and no one has moved. pic.twitter.com/LItT8adOT9