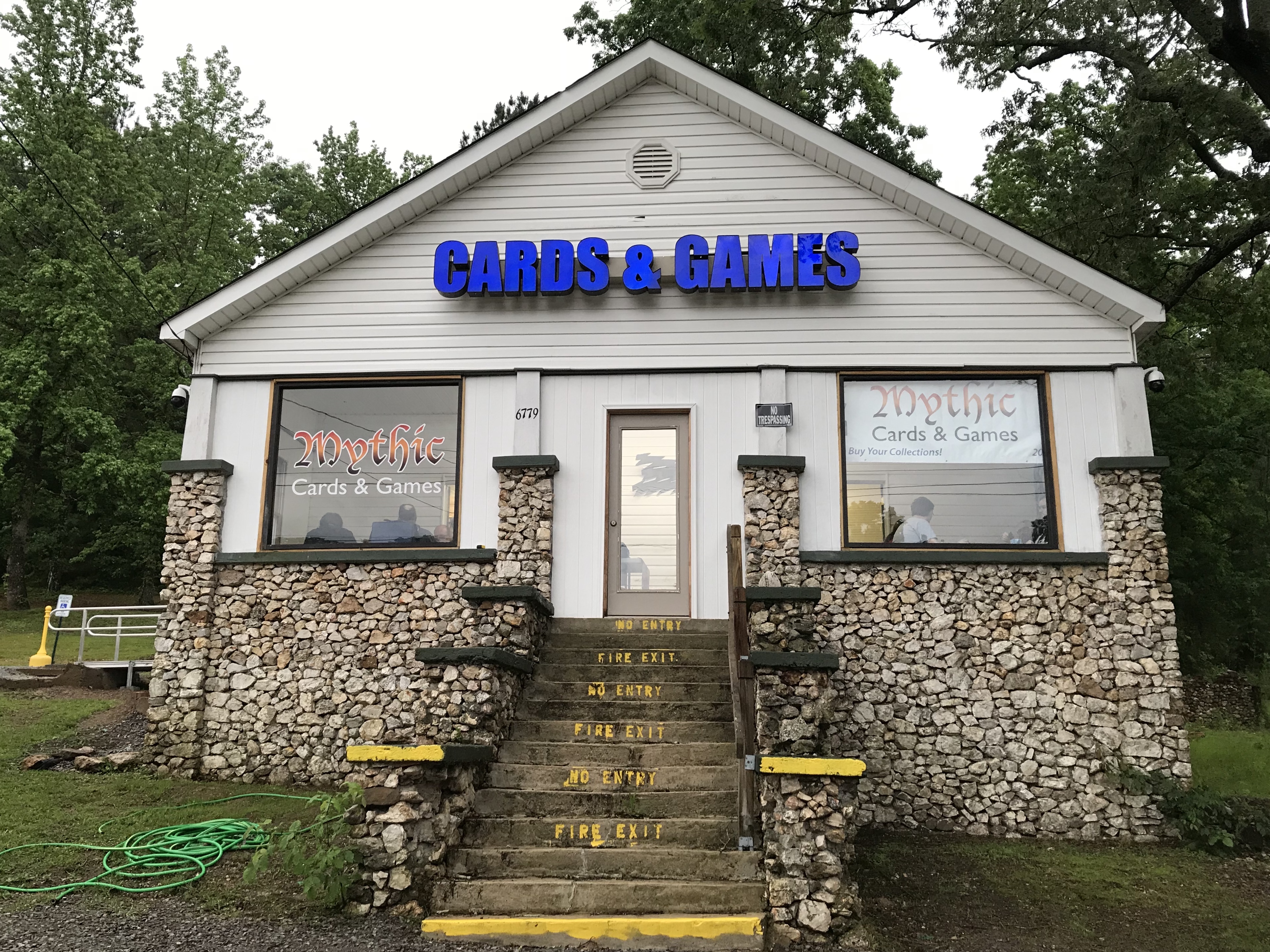 CLAY — Even a dreary, rainy day didn’t stop people from coming out to enjoy a night of gaming at Mythic Cards & Games Saturday night. Cars packed the parking lot and gamers filled the tables for multiple events at the popular game shop in Clay.

Mythic, which originally opened in Clay in 2016, recently moved from its former strip mall storefront location at 6401 Old Springville Road to what most people in Clay know as the white house beside Carroll Pharmacy. The shop opened at its new location, 6779 Old Springville Road, on April 10, 2019. 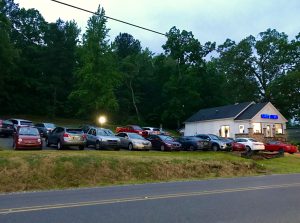 “We’re getting new customers, so that’s a great thing,” owner Nathan Thompson said of the move. “We’ve actually had some people that have noticed us that did not know we were in Clay before. I’m really surprised how much traffic is here. We’ve (also) still got a lot of the same customers that are coming the whole distance to get here – the extra mile. We have a lot of people that come out and have a good time with us.”

Thompson bought the property in July of 2018 and has spent the last year preparing it to be the new home of Mythic Cards & Games.

“It’s been a lot of work, but I’m very proud of it, very proud of what I’ve done,” he said. “One thing I wanted to keep is the, you know, try to keep the look of the building. I didn’t want to really change it. We could’ve changed, we could’ve ripped out everything and gutted it, but I tried to save as much as I could of the history of the property.” 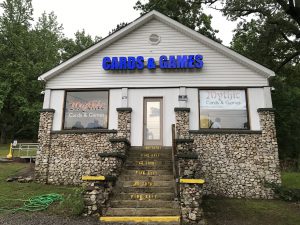 The closed-in front porch playing area boasts original rockwork from the house, and the retail portion of the store still has a lot of the 100-year-old original wood floors.

“The building’s not really much bigger, but it is designed a lot differently and it’s much more efficient for what we’re doing,” Thompson said. “We can comfortably sit more players. We’ve gotten a lot more play space. It’s actually been great.”

At the former location, only six of the nine playing tables he had were able to be regularly used. Now he has 10 tables available for people to play on. Up to six people can fit on the regular tables, while up to 10 can fit at the “big table,” Thompson said. However, he usually spaces the seating out with four players per table and six to eight on the big table.

“We have room to add a couple of tables for big events,” he said. “Our normal everyday seating arrangement holds 38 people.” 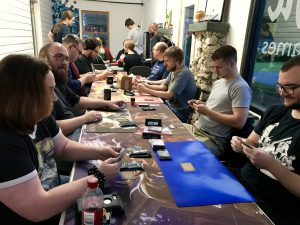 On Saturday, 26 people came out for Magic: The Gathering open house, 17 for a Magic draft tournament, and nine people came for a Yu-Gi-Oh! tournament.

Thompson said that he would love to expand the building down the road, but that it is not in the immediate plans.

“Everybody’s been positive (about the new location),” Thompson said. “The only negative feedback that I’ve heard has been that we might need some more parking, which is something that I’m realizing quickly. We’ve actually not gone out to the edge of the property, so we have enough room on the property to make approximately 16 more parking spots, which we may do in the future.”

Mythic’s customer base ranges in age from nine years old to the mid 70s, Thompson said.
While the store gets a lot of players for collectible card games such as Magic: The Gathering, Force of Will and Yu-Gi-Oh!, Thompson said that a lot of people come in to play board games, as well.

“We’ve got demos of a lot of the newest (board game) titles that have come out,” he said. “We have people that play anything from Monopoly to Dice Forge, and Dix It and Mysterium, all kinds of games.”

One of the best additions to the new store, according to Thompson, is a large board game retail area. 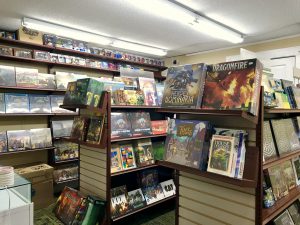 “Before, we had a lot of board games, and we still have a lot of board games – we carry over 300 titles – but before, all you could see was…the edge of the games,” Thompson said. “It’s a lot different, because now you can see the games. I’ve had customers that have been in the store every week playing Magic that said, ‘When did you get this board game? I’ve been looking for this board game’ on games that I’ve had for months. So that’s been a great change. We’ve got a lot more room for retail and a lot more room for gaming.”

Other retail items that can be purchased at Mythic include cards and other supplies for a large assortment of trading/collectible card games, Dungeons & Dragons handbooks, collectibles such as Funko Pop! Vinyl Figures, and dice sets.

“We carry some premium items,” Thompson said. “We carry tons of dice for D&D (Dungeons & Dragons) players. That’s another big seller that we have, tons of dice sets. We have a couple of bowls where you can make your own set, or we have full sets available all the way from plastic dice to metal dice to natural gemstone dice. We’ve even got machined aluminum dice in stock, so we’ve got all different prices of dice.

“One thing that we have (that) other game stores don’t really offer is we have all of our card inventory listed in a database. So you tell us a particular card that you’re looking for, we can pull that card for you and get it for your deck.

“We also sell snacks and drinks, so the gamers can come out, hang out, grab a Hot Pocket and soda, and don’t have to run out for food.”

Thompson said that his number one seller is Magic: The Gathering. 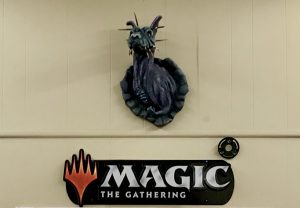 “There’s millions of players worldwide,” he said. “Board games are definitely the number two seller. One thing that we do is we carry a lot of old stock that other stores don’t carry. We’ve got stuff back to the first edition. We’ve got games from pick-up-and-play $20 games to…some of the Kickstarter special editions of games that go up to $400, $500, $600.”

Thompson said he also takes trade-ins of all kinds of games for cash or credit.

“We generally stay late every night,” Thompson said. “Generally, everybody’s having such a good time that it’s hard to get people out.”

Thompson said that pre-release events, which he holds four times a year, can last all night. On April 27, he held a Magic: The Gathering pre-release event that lasted from 12 a.m. until 6 a.m. During that weekend, Mythic had five separate events that brought in 30-40 players each.

“The great thing was that in our old spot, we were really cramped,” he said. “Here, for the pre-release, we had nobody that had complaints, everybody seemed very comfortable. So we’ve got more room between the tables here, which is a great thing, and more room for everybody to sit. So I think it’s a lot better spot.”

The store hosts two Magic: The Gathering tournaments every Friday night at 7 p.m.: a standard format tournament and a draft tournament. Draft is a tournament format where players open new packs of cards at the event and build their decks.

While Mythic does not focus largely on video games, there is a small video gaming room in the back of the shop where Super Smash Bros. tournaments are held. One such tournament took place last Sunday, May 5.

“I try to balance all the tournaments to where we can do everything,” Thompson said. “So we have as many tournaments as we can during the weeks, and then we have open free play for everybody at other times.”

Local artist Mariah Weber, who moved to Alabama from New York last summer, said that she goes to Mythic almost every time the doors are open.

“It’s just a really great community and everybody’s really kind,” Weber said. “We love it here. I’ve made a lot of really close friends here, too, especially moving to a new state. That’s a really hard move, so it’s been great to come here and have a community.” 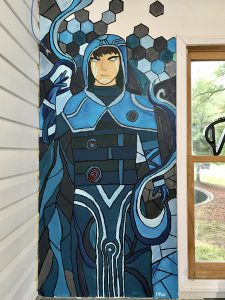 A mural of Jace Beleren, a human planeswalker from the game Magic: The Gathering, painted by Mariah Weber.

Weber, who painted a mural of a popular character from Magic: The Gathering on a wall inside the store before it opened in its new location, said that the best thing about Mythic is the community.

“Everybody comes together and supports each other,” she said. “We help build decks together. Nathan provided games and cards for our church group when we did a board game night. He provided a lot of stuff for us be able to have that.”

As far as new events, Thompson said that he is considering starting junior leagues for Pokemon and Magic: The Gathering, which would appeal to middle school-aged kids. The details are still being worked out for the junior leagues.

Board game open play every Thursday during regular business hours

Force of Will pre-release event on May 19 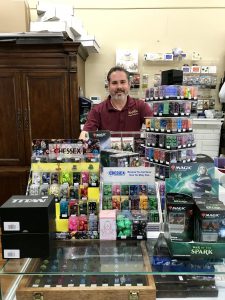 Thompson said that Mythic has store rules that are simple, yet important:

“One great thing that we have is we’ve got a family friendly environment, because we require that,” Thompson said. “We also have one other rule…no cash transactions among players. It’s a trading card game, don’t open a store in my store.”

To keep up with scheduled events at Mythic Cards & Games, visit their Facebook page or check out the Wizards Event Locator, which can be found online at magic.wizards.com. 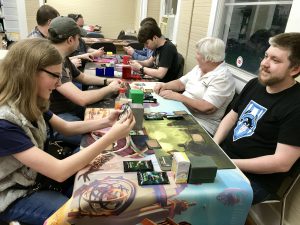 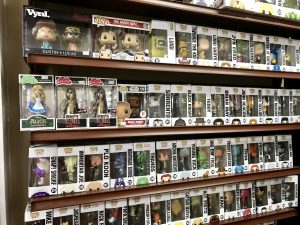 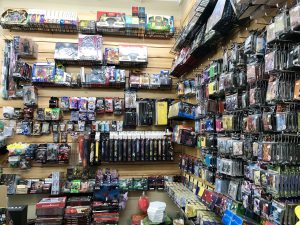