Posted By: Trussville Tribune staffon: May 07, 2019In: Obituaries
Print Email

Sentell Killingsworth, 90, went home to be with the Lord on May 3, after a brief illness. 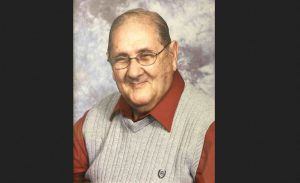 Killingsworth was born on Novemer 25, 1928 in Marshall County, and grew up there until WWII made the family move for work at the steel plant in Gadsden. Sentell graduated from Emma Sansom High School in 1949 and joined the Army in October 1950. He was deployed to Germany during the Korean War, where he worked as a carpenter and drove 2 1/2 ton trucks. He was honorably discharged in 1952 and returned home to Gadsden. That fall at a rainy Emma Sansom football game he met Betty Ruth Mackey, and they were married the next year on June 18, 1954. Sentell went to work for Orkin Pest Control, and after 28 years left the company to start his own pest control business. Sentell Pest Control was created, and with Betty Ruth’s help he ran the company for 35 years. He retired at 85 years young. Sentell also enjoyed working at Homestead Hollow managing the permanent cabin and summer kitchen, where he was often seen making corn cob pipes. He was a member of the 1st Baptist Church of Springville and served on the Springville Historical Society Board. Sentell was an avid Alabama football fan, and one of his favorite memories was attending the Alabama verses Auburn game where Alabama was victorious for his 80th birthday.

Visitation will be at Jefferson Memorial Gardens in Trussville on Tuesday, May 7 from 5-7 p.m., with a service at 7 p.m. to follow. Internment will be Wednesday May 8 at 10 a.m. Pallbearers will be Dennis Kujan, Alan Kujan, Gene Kujan, Wayne Lusk, Dale Craiger and Adam Killingsworth.