TRUSSVILLE — Taco Mama is one step closer to opening after the Trussville City Council meeting on Tuesday, Oct. 22, 2019.

The council held a hearing on the liquor license for the location at 2050 Gadsden Highway. Brad McGiboney, an attorney for Taco Mama, answered questions from the council about the restaurant’s policy on serving alcohol.

The attorney said servers will ask for identification from anyone appearing to be 30 or under. Servers are also trained by a specialist on what to look for in verifying an I.D. and on how to handle issues concerning overserving alcohol, according to McGiboney.

McGiboney said the restaurant is aiming to open around Nov. 14.

The council unanimously approved the alcohol license for Taco Mama.

The council also approved a resolution accepting a $10,000 Jefferson County Community Grant. The money will be used to assist in traffic camera upgrades. In the resolution, the city thanked Jefferson County Commissioner Joe Knight for helping secure the grant to help pay for the traffic safety equipment and software.

The traffic camera upgrades were approved by the city earlier in October after a presentation by Trussville Fire Chief Tim Shotts. 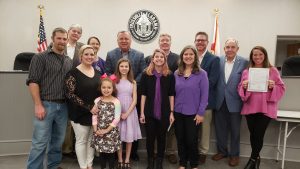 According to the End Epilepsy organization, 65 million people around the world have epilepsy. With supportive care, people with epilepsy can live normal, successful lives. That’s why the city of Trussville made a proclamation to observe End Epilepsy Day on Nov. 2, 2019.

The city would like to encourage residents to take action to end epilepsy. Representatives from the Epilepsy Foundation of Alabama were on hand

Hewitt-Trussville High School student Caroline Rowe will sing the national anthem at The Walk to End Epilepsy, on Nov. 2, in Railroad Park.

The Public Works Department asked the city to purchase a new dump truck and on Tuesday night, the council resolved to allow the mayor to enter into a contract with Nextran Truck Center. The truck will cost $144,802.

The city council also approved a land swap for property off Highway 11. 518 Main Street will be swapped for a larger piece of property for the Trussville Board of Education. The swap is between the city and the developer of the property.

A resolution approving the mayor to enter into a contract with Tillman Consulting LLC, in relation to property appraisals and acquisitions was approved by the council.

Mayor Buddy Choat said 42 properties are needed for right-of-way acquisitions, along loop roads. The purpose of the project is to divert traffic off major thoroughfares throughout Quadrants two and three. Tillman Consulting will handle all appraisals, negotiations and all services with project engineers, attorneys and city personnel.

6635 and 6639 Bedford Circle were annexed into the city. Rick McDowell, who lives on the property, told the council he would like to annex the property in order to be a part of the city of Trussville. The move came recommended by the Planning and Zoning Committee. The annexation was approved unanimously.

Troop 245 was at the meeting. One member stood led the Pledge of Allegiance. The troop is working on citizenship in order to earn the community merit badge.

Councilman Alan Taylor was the only council member not in attendance at Tuesday’s meeting.

Mayor Choat updated the city on the effort to improve interstate lighting in and around the city of Trussville. Choat said the Mayor’s Association met with Tony Cooper, with the Alabama Department of Transportation (ALDOT), to discuss issues several cities have experienced with the maintenance of interstate lights.

“ALDOT has put a proposal to the Mayor’s Association to do an 80/20 split on the cost of evaluating every light on the interstates in Jefferson County,” said Choat.

The evaluation will cost $150,000 and will determine which municipalities are responsible for which lights. The Mayor’s Association agreed to pay $30,000 for the evaluation.

Choat said the city is also doing an evaluation of lights on Valley Road and Linden Street. He also said the current speed limit of the new Valley Road extension is currently 30 mph and that could be increased after a traffic study.

Mayor Choat also announced the resignation of Jane Bailey, from the Planning and Zoning Committee. The former City Council President has served the city of Trussville for many years.

“Those who know Mrs. Bailey knows what a tireless worker that she has been,” said Choat. “She has been an asset to the city of Trussville, especially in the planning and development of what is in Trussville now.”

Bailey resigned for personal reasons, according to Choat.

Several items were approved as part of the consent agenda, including training and conference events:

Also as a part of the consent agenda, the council approved Alabama Power lighting upgrades on nine poles. Three lights on Parkway Drive, two lights on Bethune Parkway, one light at Cahaba Elementary and three lights at ACTA parking and the pool will be upgraded to LED.