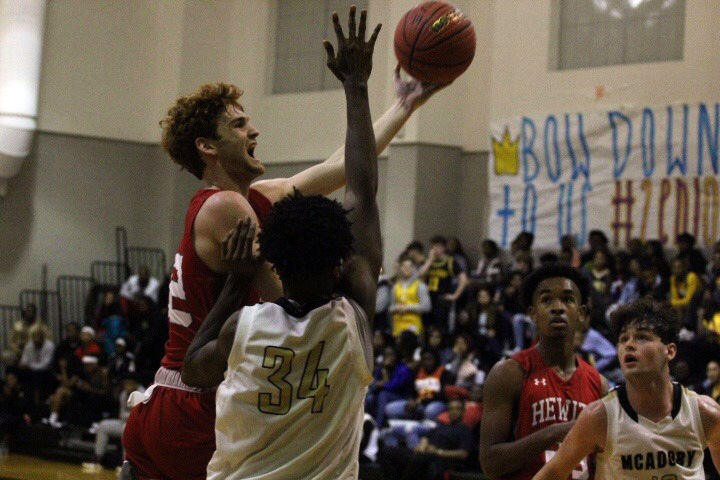 MCCALLA – Though the Hewitt-Trussville boys and girls’ basketball teams recorded victories in their season openers against McAdory on Thursday, they both did so in completely different fashions.

The girls needed a stellar second half to rally back from as much as 12 points down to hold on and defeat the Yellow Jackets, 68-63. The Huskies scored 42 points in the second half, which followed a first half where they scored just 26 points. In contrast, McAdory jumped on the Huskies early with 37 first-half points behind a stingy defense and a strong post game. 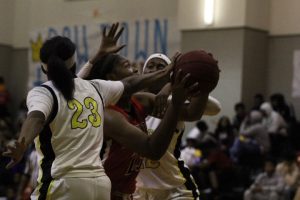 It took the Huskies four minutes into the first quarter to notch their first points of the season. D’Yona Jones scored the initial five points for Hewitt-Trussville. She would finish with 17 points on the night.

Hewitt-Trussville would trail all throughout the first half. The Huskies did manage to narrow the deficit to 21-18 midway through the second quarter, but a Yellow Jacket surge halted the Huskies’ run. McAdory entered the half leading, 37-26.

The Huskies then started clicking in the third quarter.

The McAdory lead was cut to seven points after the Huskies’ Jones scored four straight points to begin the second half. With two minutes left in the quarter, that Yellow Jackets’ lead shrank to just four points, 44-40, but several Hewitt-Trussville miscues led to five consecutive McAdory points.

A 3-pointer from Amiya Payne with 28 seconds left in the third narrowed the lead to 49-46 to cap a fierce six-point rally. McAdory entered the fourth quarter leading, 50-48. Payne scored a team-high 19 points in the game.

The fourth quarter belonged to the Huskies, specifically Payne and Kenleigh Cahalan. The two combined to score 15 points in the final quarter. Hewitt-Trussville took its first lead of the game with 6:37 left in regulation beyond a corner 3-pointer from Cahalan. From then on, the Huskies were tasked with fending off a Yellow Jackets squad that would not go down without a fight.

McAdory narrowed the Hewitt-Trussville lead to one-point, 64-63, with 1:32 left in the game, but the Huskies would score four consecutive points to ice it.

Cahalan capped off her stellar fourth quarter with 10 points on the night.

In the second game of the night, the Hewitt-Trussville boys had no trouble with McAdory. The Huskies jumped out early and cruised behind a potent perimeter game and strong post presence. The Hewitt-Trussville lead blossomed from a 21-11 first quarter advantage to a 52-32 lead at the half. 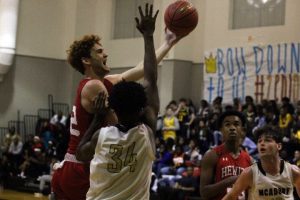 The Huskies nearly ballooned that lead to 30 points in the third quarter, but the Yellow Jackets did just enough to keep the lead at a reasonable 20 points to conclude the third, 68-48.

Hewitt-Trussville avoided certain disaster in the fourth quarter after the Yellow Jackets had the gall to try to narrow the deficit to under 20 points. In that endeavor, McAdory succeeded. The final score ended up being 85-67.

The Huskies hit 10 3-pointers on the night. Cameron Glover connected on four of those 10 3-pointers. Glover finished the night with a team-leading 18 points. Carter Hollis finished just behind with 16 points, six of which came in the fourth quarter.