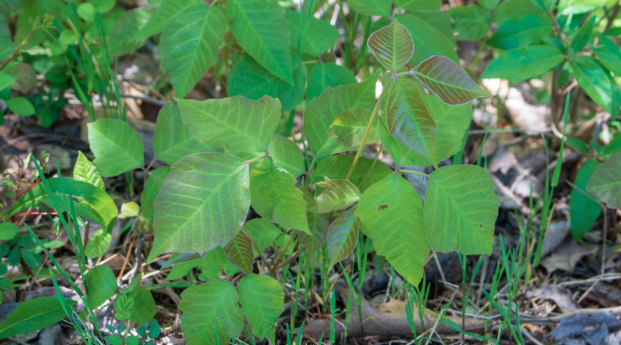 Beware of poison ivy this summer

Submitted to The Tribune

It’s summer in beautiful Trussville, and that means that many homeowners are sprucing up their yards and taking pleasure in outdoor activities. Most understand the importance of keeping a watchful eye out for cottonmouths and rattlesnakes. However, these aren’t the only dangers that may be lurking around in your yard. In fact, this danger blends in better with its surroundings than even the most stealthy snake. It’s called poison ivy. Let’s look at how you can identify it, safely remove it, and treat it if you’re exposed.

According to the American Skin Association, some 50 million Americans have an allergic reaction to position ivy each year. That actually makes it one of the most common allergies in the U.S.

In most cases, the allergic reaction is called contact dermatitis, which occurs from the poison ivy’s sap coming into direct contact with the skin. Even minuscule amounts can cause the reaction, and around nine in every 10 people are sensitive to the sap from poison ivy. Some people may also find that each incidence of a poison ivy allergic reaction will be worse than the last one.

Accidentally ingesting poison ivy is rare in adults, but it can certainly happen with curious kids. In such cases, the poison ivy reaction can cause severe damage to the digestive tract and kidneys. Likewise, inhaling the smoke from burning poison ivy can also cause an allergic reaction in the lungs.

The poison ivy compound urushiol is what causes the allergic reaction. It’s a very oily substance that doesn’t evaporate easily. So, even after careful removal of poison ivy from your yard, the residual urushiol can stick around for weeks to months to contaminate the area.

Do keep in mind that your yard tools, clothing, shoes, pets, and so forth may also transfer the urushiol contamination to others who didn’t come into direct contact with the poison ivy plant.

The first step in preventing an allergic reaction to poison ivy is being able to recognize its presence in your backyard here in Trussville, Alabama. Let’s look at some fast facts:

• The leaves change color with the seasons – yellowish/orange/ to red in the winter, reddish in spring, and green in summer.

• It commonly grows as a vine, but it can also form a bush/shrub.

• The most prominent feature of poison ivy is that the leaves grow in groups of three.

• Most poison ivy species have notched-edge leaves but some may have smooth-edge leaves.

• The end of the leaves are pointed.

• In the spring-winter, look for small clusters of white berries.

• In drier weather the leaves often look shiny from the oily urushiol, but rainy seasons may dull that shine.

To help prevent exposure, try wearing heavy vinyl gloves for your gardening and yard work. If you’re in dense vegetation, then make sure to wear long sleeves and pants, too. Those with previous severe allergic reactions to poison ivy may also want to consider a preventative skin cream, such as Ivy Block, when working around known areas with poison ivy. If contact does occur, remember to immediately wash the skin with soap and water and carefully clean any personal objects that came into contact with the plant.

Getting Rid Of Poison Ivy

You never want to burn poison ivy. If you inhale the fumes, you can have a severe allergic reaction and compromise your ability to breath and swallow. The plant particles also disperse into the air to land on your skin during the burning process.

The tricky thing about poison ivy is that it will likely come back, even if you spray it with chemicals or follow DIY tricks like a suffocation tarp or boiling water. Why? It has a rather aggressive and strong root system. So, whatever method you use to kill the part of the plant above the ground, you’ll still need to don some protective wear and dig up the entire root system. Place it in a plastic bag and dispose of it.

What If I’m Exposed To Poison Ivy?

Poison ivy dermatitis often presents a little differently in each person. It really depends on the exposure level extent and your own sensitivity level. Generally, here’s what to look for after exposure:

Poison Ivy isn’t contagious in that the rash itself is spread across your body, or to others. If the rash appears in one area and then another, it means you were exposed to urushiol in both places. With that said, you can spread poison ivy to others if urushiol is left on your clothing or skin.

After exposure, you’ll want to gently wash your skin with soap and water to remove the urushiol. A doctor’s appointment typically isn’t necessary. Most poison ivy rashes clear up on their own within a couple of weeks. Do, however, seek immediate medical attention from a local specialist like Associated Dermatologists in Trussville if any of the following apply:

• The rash is in a sensitive area – eyes, mouth, nose, genitalia

• Rash doesn’t improve within a couple of weeks.

In such cases, your doctor or dermatologist may prescribe steroid injections, creams, or pills to help your allergic response and oral antibiotics for any infection.

You’ll want to keep a careful eye on how your poison ivy blisters are healing. Large, deep, and continually worsening blisters should be shown to a dermatologist to ensure proper healing and prevent any unwanted scarring.