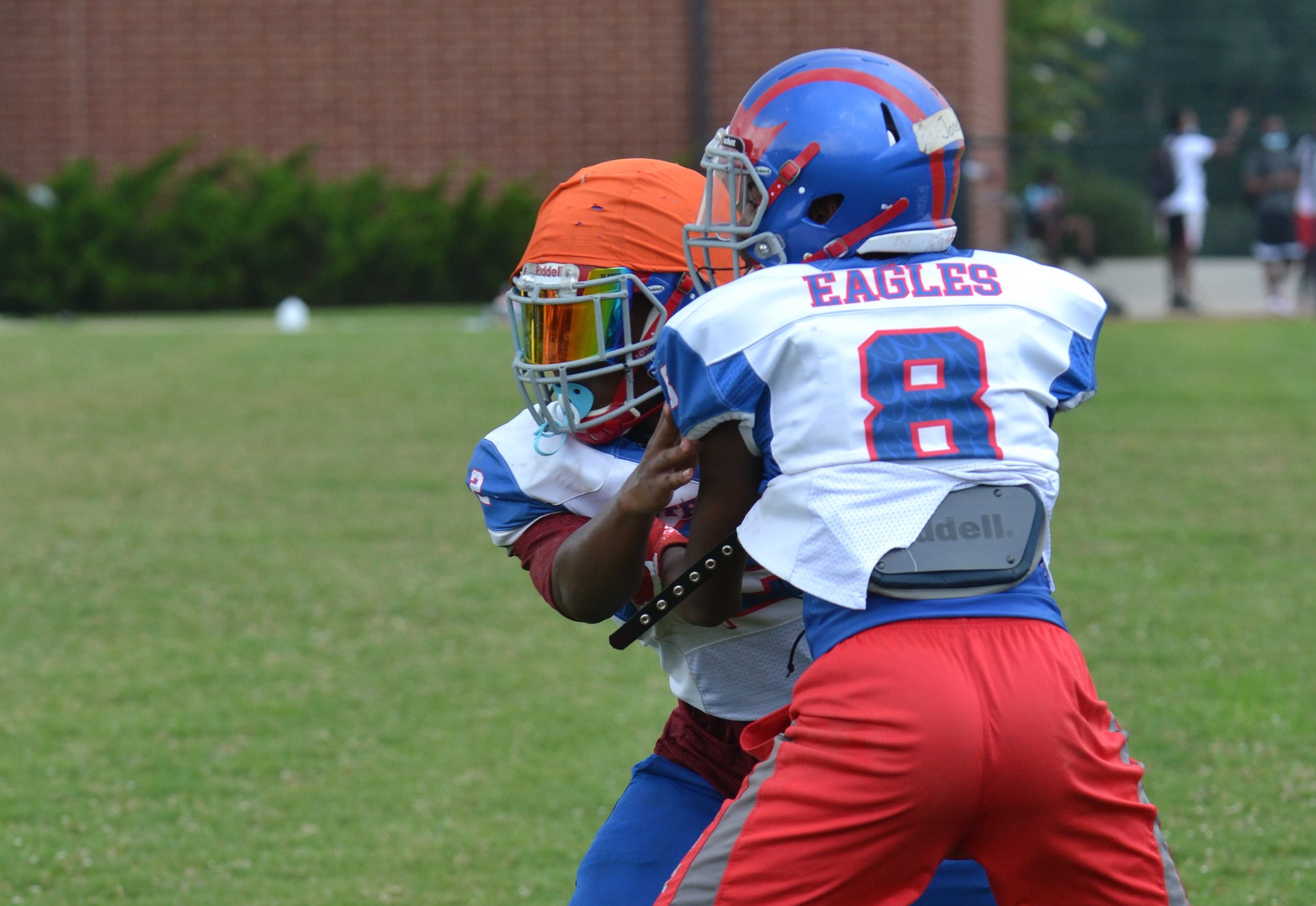 A Center Point receiver holds his block during a preseason practice on Aug. 6, 2020. Photo by Erik Harris

CENTER POINT — The environment is changing, and George Bates can see the confidence growing throughout his Center Point roster.

In two seasons with the Eagles, Bates has won more games (15) than the previous two coaches combined during a five-year stretch. Shawn Gregory went 1-19 as head coach between 2016-17, and Bennie Hall led Center Point to an 11-20 mark between 2013-15.

Bates sits at 15-10 overall after last year’s 9-4 run to the Class 5A quarterfinals.

“People talk about culture and things of that nature, and to me, in your third year you can start to see it,” said Bates. “I can see myself in the team now, and that’s the biggest difference.”

For Bates, his biggest challenge since taking over in 2018 has been building mental toughness. His efforts are obvious, as his Eagles won their second and third playoff games under his watch last November.

“It’s been about giving the kids some stability and proving to them that we can play big-time football,” said Bates. “Once the kids start seeing the city leaders—mayor, pastors—supporting the program, it makes them feel like someone cares.”

Center Point is going to be “extremely young” this year, but that wont change the expectation.

First-year offensive coordinator Brandon Wilcox has been given full rein of a unit that’s still working through a quarterback competition. Wilcox, who won 28 games as head coach at Montevallo from 2016-19, will choose between sophomore candidates Troy Bruce and Jabari Collier.

“Both of those guys are athletic,” said Bates. “Jabari is the taller of the two and Troy is the more explosive of the two.”

Bruce contributed as a running back last year as a freshman, and Bates believes that experience gives him a slight edge over Collier, who has not played since middle school.

“It’s still going to be a battle,” said Bates. “I would give Troy a slight edge due to him playing ball last year. He was a varsity contributor, starting quite a few games at tailback last year and Jabari hasn’t played (football) since about seventh grade.”

Perhaps the only senior in the huddle will be running back D’ontae Eatmon, who checks in at 5’10” 205. The team’s top returning wideout will be sophomore Harold Holloman.

“He had some big catches in big games as a freshman, so he will probably be our go-to guy,” said Bates.

He expects big things from rising junior Evan Swann—6-foot-4, 220 pounds—on both lines of scrimmage. Swann is one of many that will be called upon for offensive and defensive duty this year.

Bates will also look to Jayvon Brooks for production up front.

Senior linebacker Khalid Collier was the first player Bates pointed to on the defensive side. At 190 pounds, Collier is expected to be one of the Eagles’ top playmakers.

Tamarkus Judkins is, perhaps, the most versatile player of the group.

“He’s going to be our rover,” said Bates of Judkins. “He played all over the place for us last year and did a great job.”

In the back end, Bates will rely on senior corner Jalen Smith and Woodlawn safety transfer Tramaine Brown.

“We were disappointed when Mortimer Jordan moved up (to Class 6A), because we felt like that was a very nice rivalry that was starting to come to life,” said Bates. “And then with Central-Clay County, we had a big rivalry for the two years we played each other. We were disappointed when it came out because we really wanted those guys to stay in because they were two of the best teams in 5A and we felt good about saying we had the best region.”