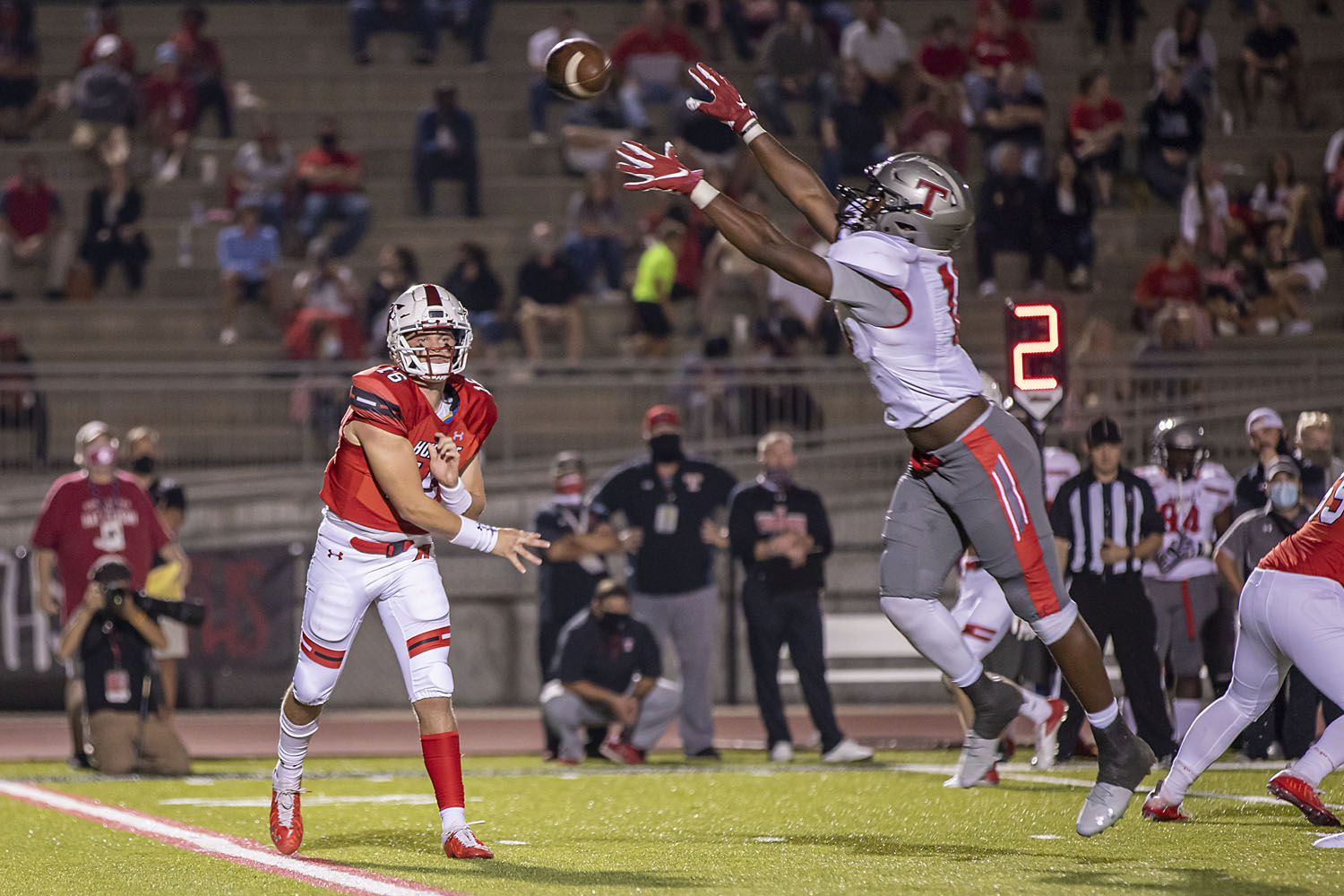 Hewitt-Trussville quarterback Cade Ott Carruth fires a pass during a home game against Thompson on Sept. 18, 2020. Photo by Ron Burkett

TRUSSVILLE — A sluggish first half was too much to overcome for Hewitt-Trussville on Friday night in front of an ESPNU television audience.

“In the first half alone tonight, we had more mistakes than we’ve had in the entire season combined,” said Hewitt-Trussville head coach Josh Floyd following the game. “They’re dang good on defense and you can’t give them any hope.”

“My biggest frustration is we shot ourselves in the foot over and over again,” continued Floyd. “We had guys lining up wrong and just stuff we haven’t done all year and I don’t have an excuse for it other than we didn’t get it done and I didn’t do a good enough job getting our guys ready.”

Hewitt-Trussville struggled to stop Harrell throughout the first half, as the junior fired touchdown passes of 31, 5, 66 and 36 yards to send his Warriors to the half with a 35-14 advantage. His final two touchdown tosses went to wide-open targets, swelling the lead to three touchdowns.

Defensively, the Huskies rebounded in the second half to pitch a shutout—something Floyd pointed to after the game.

“I’m really proud of our guys the way we came out in the second half,” said Floyd. “Even though we didn’t win the game, I think we took a step in the right direction as far as just showing character.”

Although the Hewitt defense firmed up, their offense could not provide enough oomph to rally back. Senior running back Armoni Goodwin would cut into the big deficit with his second touchdown of the night with 3:35 remaining in the third quarter.

The Auburn commit scored twice on the same play call—a misdirection give that opened up running lanes down the left side. He scampered in from 58 and 25 yards out. He would finish with 128 yards and two scores on 14 carries, giving him more than 100 yards in each of his four outings this fall.

Hewitt-Trussville’s first score traveled 13 yards from quarterback Cade Ott Carruth to Omari Kelly, who pulled down a short toss and broke free for a 7-7 tie midway through the opening quarter.