LATEST NEWS
Home Lifestyle The wait is over, ACTA Theatre to return with ‘Wait Until Dark’ 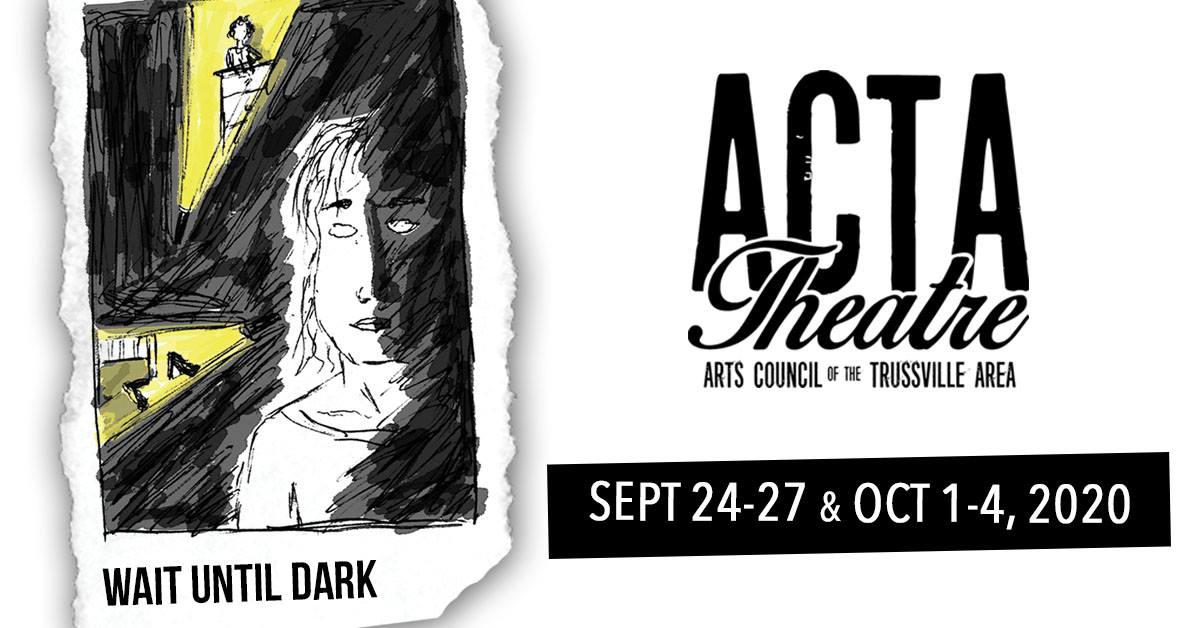 The wait is over, ACTA Theatre to return with ‘Wait Until Dark’

By Shaun Szkolnik, for The Tribune

TRUSSVILLE – ACTA is bringing theater back to Trussville starting Thursday, Sept. 24, 2020, with a performance of “Wait Until Dark”. The theater was closed in March when the worldwide COVID pandemic led to the doors being shut and the cancellation of Deadwood Dick; a production that was set to debut in April.

“The ACTA Board voted at the beginning of August to reopen and proceed with our plans for our 2020/2021 season with strict COVID-19 precautions and guidelines,” said ACTA Theatre Manager Lucy Lunsford. “It was a difficult decision and we will be moving forward cautiously, with the intent and hope to perform our season as scheduled, provided there are no further restrictions.”

According to Lunsford the theater officially reopened on Aug. 17, 2020. It was on that date that ACTA reopened the doors and held auditions for their newest production.

“Wait Until Dark” is a psychological thriller that debuted on Broadway in 1966 with a film version, starring Audrey Hepburn and Alan Arkin, being released a year later. It is a classic noir, featuring a deadly game of cat and mouse that would keep even Raymond Chandler guessing at what was to happen next.

Direction and production of the play is in the capable hands of Michael R. Bridges. Bridges has been associated with ACTA since 1988. “Wait Until Dark” is the fourteenth play he has helmed for ACTA.

“In my opinion, this show, by Frederick Knott, is one of the best horror psychological thrillers ever written,” said Bridges. There is a new version out that takes place in the 1940s, but we opted for the original recipe for true scary.”

Bridges is ecstatic about being at ACTA for the return of community theater.

“I am also truly thrilled to direct such a talented, committed cast,” said Bridges. “Most of them I have directed a number of times. Preparing for a show during these times has not been easy, but we assure you a quality show under the safest of protocols. The show is also near and dear to my heart because I appeared in 1979, at my alma mater, Auburn University at Montgomery, as Sam. I am extremely happy to have fellow AUM alum and friend Shari Olm on my directing team.”

“Wait Until Dark” features, several veteran actors. A stable of talent that will be sure to shine in this thriller.

“The cast is amazing,” said Bridges. “I have worked with the entire cast of eight (nine for doubling) several times. Lauren Culotta as Susy, who typically has played leads for me in musicals -most recently in Brigadoon, is in her first dramatic lead role. Dan O’Rourke as Mike Talman is an outstanding actor who had leads in “To Kill a Mockingbird” and “Cheaper by the Dozen”. Stacy Lowery plays the sinister Harry Roat Jr., having played another eerie part in the title role recently in “Sweeney Todd”. Phoenix Carroll, a former student of mine, will be Sargent Carlino … he is extremely versatile for a young actor. Double cast as the precocious, inquisitive Gloria are young actresses Sara Marie Buttram and Olivia Vick -they each play the role a little differently, but are excellent! Rounding out the cast are Shawn Reese as Sam Hendrix … and Walter Reed, Morgan Smith as the policeman and woman.”

Concerns over COVID have created unique challenges for the project. Bridges and crew have done everything they could to keep the event safe.

“We had to follow a strict protocol of social distancing during rehearsal,” said Bridges. “We double-cast the role of Gloria and, additionally the policeman and woman are ‘swings’ in case one of the leads cannot perform. Though challenging, this has been a wonderful, hardworking cast. I assure audiences, they will be safe with distancing and protocol measures.”

The safety guidelines and protocols that protected the cast during rehearsal will be extended to theatergoers when the play goes public. Keeping everyone safe is of the highest importance to Theater Manager Lucy Lunsford.

“We will be operating at less than half capacity,” said Lunsford. “Every other row of the theater has been blocked off and social distance space will be left in between patrons of different households. Masks will be required to be worn by all audience members. We won’t be selling concessions at our performances this year, but patrons are welcome to bring their own snacks into the theater. We will be doing frequent cleaning of all theater seats, bathrooms, and highly touched surfaces within the theater.”

Added precautions will not be able to detract from the excitement of the return of live performances to ACTA Theatre.

“I am so excited to be reopening the theater,” said Lunsford. “It has been so sad to see it sitting empty for so long. A theater is meant to be brimming with life, art, magic, music, stories, and most importantly an audience – someone to share those stories with! And we’re excited that following state & local guidelines, wearing masks, social distancing – we can reopen safely for our patrons and bring smiles (or tears) to their faces once again!”

And there is perhaps no better way to herald the return of ACTA than with “Wait Until Dark”.

“There is nothing like a good thriller,” said Bridges. “Hold onto your seats because you might be jumping right on through the floor if you are not careful.”

For more information, and to buy tickets, please visit ACTA Theatre at https://www.actatheater.com/tickets.