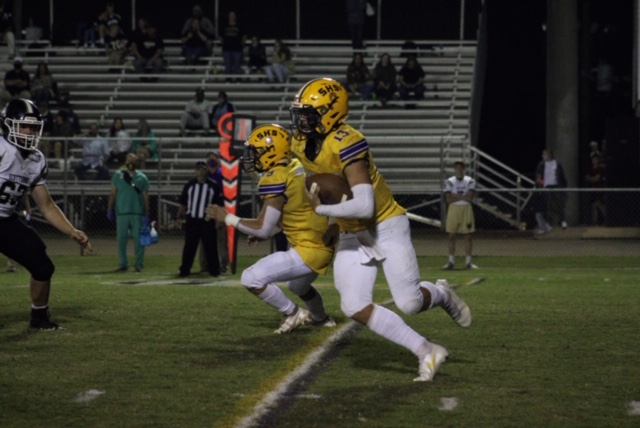 Springville quarterback Pearson Baldwin tucks the ball up during a home game against Scottsboro on Sept. 18, 2020. Photo by Ronnie Hagood

GADSDEN — On Friday night, the Springville Tigers fell to 1-2 in region play as they dropped a heartbreaker, 54-41, to the Southside Panthers on homecoming night in Gadsden.

The Panthers took a 14-point lead late in the first quarter. Rich found Hayden Robertson for a 4-yard touchdown pass with 4:24 left in the quarter. Southside would recover a fumble on the ensuing kickoff and march down the field taking a 14-0 lead on Rich’s first rushing touchdown.

On the next drive, a personal foul on the kickoff gave Springville great field position. Pearson Baldwin connected with Ben Bianchi for a 3-yard touchdown pass, making it 14-7.

In the second quarter the Tigers tied the game up on a Baldwin 5-yard touchdown run. Not to be outdone, Southside’s Rich gave the Panthers the lead back with his second touchdown run of the night, this one for 12 yards and a 21-14 halftime lead.

Southside would open up a wild third quarter with a 10-yard touchdown run from Davis to extend the Panthers lead to 28-14.

The Tigers would answer right back with a 14-yard touchdown run from Baldwin to cut the Panthers lead to 28-21 with 4:31 remaining in the third quarter.

With Southside threatening to go back up by two touchdowns, Springville’s Luke Richardson would strip the ball from Carnel Davis and return the fumble to the Panthers 3-yard line. Zane Smith carried the ball in on a draw play up the middle for 3 yards and the touchdown, tying the game 28-28 as the game went into the fourth quarter.

Just like the three quarters before, Southside put the Tigers down by a score, as Michael Rich Jr picked up the rushing hat trick with a 3-yard touchdown run, giving the Panthers a 35-28 lead.

Not to be outdone, Baldwin connected with Bianchi for the second time in the evening, converting a fourth down with a 24-yard touchdown pass. The dueling of the quarterbacks continued on the next possession. Rich Jr hit Davis with a pass out of the backfield and 44 yards later, Southside had regained the lead.

Coach Graben, “We just shot ourselves in the foot, we’re trying to change the culture here, one step at a time. We put the ball on the ground 3 or 4 times and threw a pick, so that’s on us.” Reflecting on the game, “It’s disappointing, but we have Arab and Pell City at home, we play better at our place.” The loss for the Tigers drops them to 1-2 in region play with three games remaining in the region. The win for Southside moves the Panthers to 2-2 in region play.

Springville will return home next Friday night for a showdown with another set of Panthers. The Pell City Panthers will make the trip to Tiger Stadium for the Region 7 matchup. This will be Pell City’s first game since a 59-20 loss to Oxford on September 18th. The Panthers have had to forfeit their last two games due to Covid-19 cases.