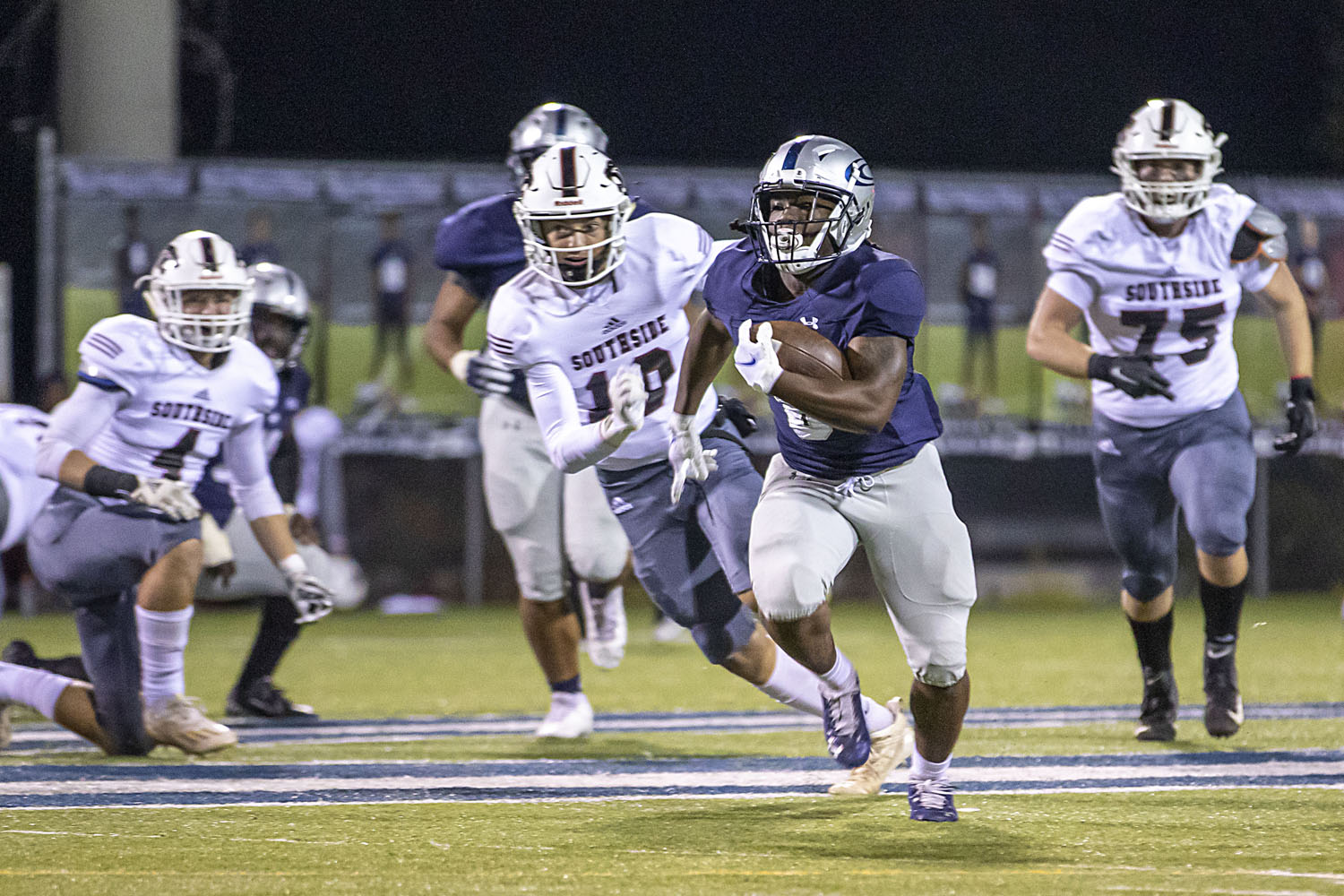 Clay-Chalkville running back Cam'ron Williams breaks loose during a playoff win over Southside-Gadsden on Nov. 6, 2020. Photo by Ron Burkett

PINSON — Clay-Chalkville carried over its stellar play throughout the regular season into Friday’s Class 6A first-round playoff contest against visiting Southside-Gadsden in what quickly morphed into a blowout as the Cougars overwhelmed the Panthers in every facet of the game, 63-0.

“This time of the year, it’s all about playing well,” Clay-Chalkville head coach Drew Gilmer said. “It’s about limiting your mistakes and getting hot at the right time. It’s good momentum for us going into the second round.”

Clay-Chalkville’s typical dominance in the playoffs was on full display from the opening kick against the Panthers. The Cougars easily marched down the field and capped off their first drive with a 31-yard Marquarius White touchdown catch from quarterback Khalib Johnson at the 9:39 mark of the first quarter. Clay-Chalkville’s lead stretched to 14-0 just four minutes later thanks to an Edward Osley 1-yard touchdown run out of the Wildcat. Osley’s touchdown was set up by a 50-yard Jordan Mccants scamper.

“The quarterback’s best friend is the run game,” Gilmer said. “Our offensive line has done a great job being physical at the line of attack and controlling the line of scrimmage.”

Stifled throughout the opening quarter, Southside Gadsden’s offense did little to mitigate the Cougars’ blazing start. The Panthers went into damage control late in the first quarter following a fumble that was recovered by Clay-Chalkville’s Lamar Croskey. That led to a Johnson 13-yard touchdown run to stretch the Cougars’ lead to 21-0 in the final seconds of the first quarter.

“Khalib has done a great job,” Gilmer said of his junior starting quarterback. “He’s gotten better each week. He’s doing a great job leading our team and leading our offense.”

The Cougars recorded their second turnover of the night on a Jayden Sweeney interception at the 10-minute mark of the second quarter. Clay-Chalkville promptly capitalized with a Ortavious Miles 13-yard touchdown catch two minutes later that put the Cougars up 28-0.

Clay-Chalkville recorded four takeaways in the first half.

“I thought the (defense) did a great job just being aggressive and making plays,” Gilmer said. “They played extremely well tonight.”

The deficit for Southside Gadsden ballooned early in the third quarter following a 40-yard Osley touchdown run. That touchdown came after yet another failed Panthers drive. The Panthers’ inability to generate any momentum on offense was partially thanks to a sensational game from the Cougars’ defensive backs. On the night, Clay-Chalkville recorded three interceptions, with the third, a Lamar Croskey pick, setting up a 6-yard Lazarius Hinkle touchdown run that increased the Cougars’ lead to 42-0 with 6:38 left in the third.

In all, the Cougars notched six takeaways on the night. Of those six, Clay-Chalkville capitalized on four of them.

The Cougars proceeded to swap out their starters in the fourth quarter. The substitutes still managed to score three touchdowns in the final frame thanks to running back Cam’ron Williams, who scored from 25 yards out and six yards out, and they also recorded a turnover on a Panther fumble on the final kickoff of the game.

Clay-Chalkville will host Homewood next week in the second round of the Class 6A playoffs. The No. 4 Patriots stunned No. 1 Athens, 34-31, following a game-winning touchdown with 29 seconds left. Overall, the Cougars hold a 2-1 series advantage over Homewood.