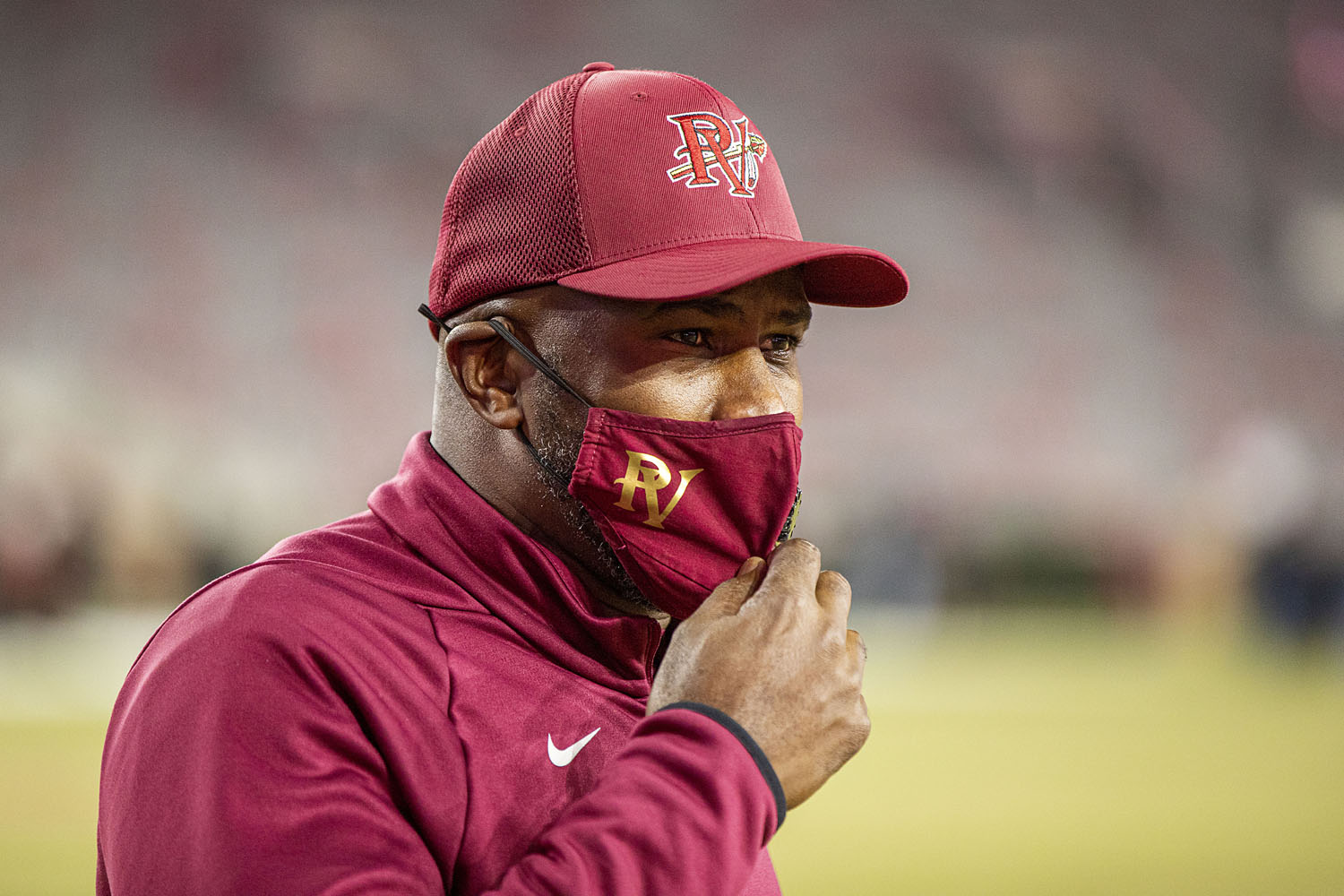 Take a look back at Pinson Valley’s state championship run

PINSON — The Pinson Valley Indians capped off a remarkable season last Friday night in Tuscaloosa, fighting back to top Spanish Fort 23-13 in the final game of the AHSAA Super 7 Championships.

The historic win represents the school’s third-ever state football championship, each of which have come in the last four years. Below is a game-by-game recap of Pinson Valley’s 2020 football season — a ride the Indian faithful won’t soon forget:

Shade’s debut did not go as planed, as the Hewitt-Trussville defense picked off his quarterback, Zach Pyron, four times en route to a 44-19 road win at Willie Adams Stadium on Aug. 22.

Under seventh-year head man Josh Floyd, the Huskies flexed their experience in the season-opening tilt. Senior running back Armoni Goodwin went for 170 yards and three scores on 19 carries, as Class 7A Hewitt pulled away for an easy win.

This would be the low-point of a championship season at Pinson Valley (0-1). 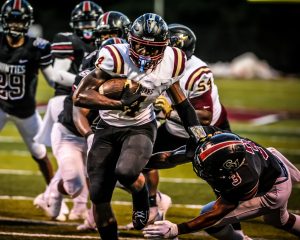 Pinson Valley running back Michael Sharpe Jr. runs into the end zone during a road game in Irondale on Aug. 28, 2020.
Photo by Vickie Unlap (fodaction.com)

Pinson Valley (1-1) struck for three second-half touchdowns after going to the break down 14-10 on Aug. 28 in Irondale. Senior standout Ga’Quincy McKinstry provided the go-ahead score with 45 seconds remaining in the third quarter, bolting 56 yards on a short catch-and-run down the right sideline — his third TD of the young season.

Pinson Valley opened up Class 6A, Region 6 play with a solid 26-15 home win over Gardendale on Sept 4. 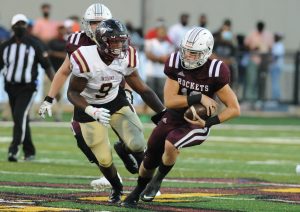 It was, perhaps, the opening act for what would become an elite defense that held the Rockets to nine first downs and 294 yards of offense on 12 drives.

Offensively, the Indians (2-1, 1-0) went to the ground game for all four of their touchdowns that September night. Michael Sharpe Jr. ran in the first two from 7 and 2 yards out in the first half, sending Pinson Valley to the locker rooms down 15-12. Kenji Christian later slipped through for the go-ahead TD from a yard out, and Pyron ended the scoring with an 11-yard quarterback draw early in the fourth.

The Indians needed every shred of offense, as their defense surrendered 492 yards on 85 Minor snaps. Four games in, it was still a work in progress at PVHS.

Pyron, a first-year transfer out of Fyffe, found his form on Sept. 19, as he hit Jackson-Olin with five touchdowns and nearly 300 yards passing in a 34-18 home win.

The Pinson Valley junior completed 22 of his 26 attempts for four scores to three different receivers (Micah Woods twice and one apiece to Jaquel Fells Jr. and McKinstry).

The Indians (4-1, 3-0) bounced back from a sluggish defensive effort in Week 3 to hold the Mustangs scoreless through three complete. Jackson-Olin would rebound for 18 fourth-quarter points, but it was too little, too late. 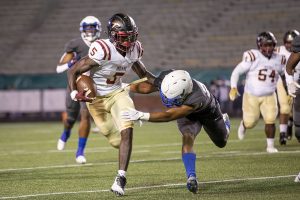 Pinson Valley running back Kenji Christian (5) runs for a touchdown against Ramsay on Sept. 25, 2020 in Legion Field.
Photo by Ron Burkett

It was a fight to the finish at Legion Field on Sept. 25, and despite the narrow loss, Pinson Valley would later identify this as a turning point.

“Our guys were really down after that game,” said Shade the Monday before the state championship game. “And that’s when we really got together and said ‘Look, if we’re going to do this, we’ve got to do it together and we can’t do it if guys don’t trust each other and if they don’t trust the coaching staff.’ And the team made a decision to buy in and do it the way we needed to do it and that’s been the difference.”

The Indians (4-2, 3-0) lost on a missed extra point at the end of the final frame, but ultimately turned their experience into a positive, as they rallied for eight straight wins on their way to the school’s third state crown.

Pinson Valley accepted its only forfeit win of the year against Mortimer Jordan.

The Indians took a huge step in their journey to a Region 6 championship on Friday, Oct. 16 at Clay-Chalkville, beating the previously unbeaten Cougars for the seventh straight time, 27-10.

At the time, Shade felt like that was his group’s best outing of the year. 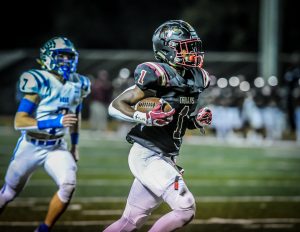 Pinson Valley senior Ga’Quincy McKinstry (1) runs in one of his four touchdowns against Arab on Nov. 6, 2020.
Photo by Vickie Unlap (fodaction.com)

It was a perfect start to a perfect postseason run.

McKinstry, in his first game back since committing to Alabama on Oct. 25, led the third-ranked Indians to a decisive first-round playoff victory over Arab on Nov. 6 at Willie Adams Stadium.

McKinstry broke loose for three offensive touchdowns and added a pick-6, as Pinson Valley opened up the Class 6A playoffs with a 45-0 win over the 4-seed coming out of Region 7.

“When you commit to the University of Alabama, you really have to show that you deserve to be there, so I had that on my mind all game long and I proved it,” said McKinstry following the win.

In a rematch of a late-August bout, Pinson Valley controlled the playoff version of this matchup, rolling by Shades Valley 48-16 in the second found of the state playoffs.

For the Indians (9-2), Sharpe ran in for four touchdowns to go with a huge outing from Jaquel Fells Jr., who provided 167 yards from scrimmage, including an 80-yard TD run. Fells also slipped free for a 60-yard punt return touchdown in the third quarter. 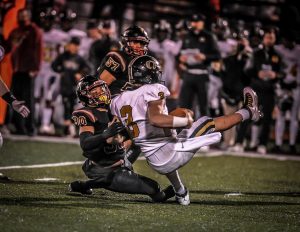 It was a defensive masterpiece that advanced Pinson Valley into the Class 6A semifinals.

Pinson (10-2) did the job with a suffocating defense that held Oxford (11-2) to 153 yards and no offensive points in the 34-2 quarterfinal win. Yellow Jackets quarterback Trey Higgins was sacked 10 times and threw four interceptions against a swarming Indians defense that secured its second postseason shutout.

“We feel really good about what we’ve got on defense and we had some guys earlier in the season that didn’t play — had a couple injuries and things like that — but when we got those guys back, we felt like we were going to take off and we have, especially defensively,” said Shade.

With the Indians dominating the line of scrimmage, Oxford was forced into six three-and-outs to go with five turnovers on the road.

On a rainy night in Pinson, the Indians started fast and cruised past Mountain Brook 27-10 to punch a ticket to the 6A state championship game in Tuscaloosa.

Sharpe popped off touchdown runs of 93 and 39 yards while the defense delivered the opening score of the night on a 46-yard scoop-and-score by linebacker Alijah May.

“This is exciting,” said Shade. “Since we started, every workout, every practice, the last thing they say is, ‘1-2-3 state champs!’ and that’s what they want.” 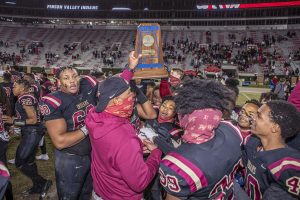 Pinson Valley (12-2) climbed back from a slim second-half deficit with 13 unanswered points in the fourth quarter to escape Spanish Fort 23-13 in the 6A state championship game in Bryant-Denny Stadium.

Pyron tossed a pair of touchdown passes: one to McKinstry (52 yards) and the other to Fells (11 yards). Sharpe also ran in a 26-yard touchdown in the first quarter and the Pinson Valley defense pitched a second-half shutout last Friday night in Tuscaloosa.

And for the third time in four years, the Pinson Valley Indians are state champions.