TRUSSVILLE — The state continued to call witnesses to the stand in day two of testimony in the capital murder trial of Bryan Hancock.

Hancock, 24, of Pinson, is accused in the 2019 shooting death of Randy Young in the parking lot of Cracker Barrel, in Trussville. Young was shot in the head in the parking lot of the restaurant after a dispute over parking, according to both the prosecution and the defense. Young died after being on life support for two days.

Jury selection and opening statements wrapped up Tuesday and were followed by the state calling witnesses. You can read details from day one of testimony by clicking here.

The first witness called by the state Wednesday was former Trussville Police Department Evidence Technician Ben Short. Short, who now works for the Jefferson County District Attorney’s Office, said he responded to assist in the shooting investigation on the night of March 28, 2019.

Short testified that he took photos of the scene. In those photos, the jury saw the white Mitsubishi Galant the victim was in on the night of the shooting. On top of the car, a to-go bag containing the food Young and his stepfather ordered to take home to Young’s mother. An orange cone was placed beside the car, covering a single shell casing. Not far from the cone, blood and brain matter remained on the ground, along with a blood-stained rag.

Defendant Hancock looked at the screen as images were shown.

The state presented the shell casing in court. Wrapped in a sealed and taped evidence envelope. Prosecutor Deborah Danneman asked Short if any weapons were found in the Mitsubishi Galant during two separate searches of the vehicle. He testified no weapons were found but did confirm an oxygen tank was in the trunk of the car. The victim’s stepfather, Robert Shepard, previously testified that in the midst of a verbal altercation between the victim (Young) and the suspect (Hancock), he asked Young to find his oxygen tank for him after he became winded.

The prosecution then opened a sealed evidence box containing the firearm investigators said was used to shoot and kill Young. It was a black handgun. Shepard testified Tuesday that he saw Hancock’s arm coming out of the truck, saw a black handgun pointed at his stepson’s head, then saw fire coming out of the barrel of the gun. Although he said he witnessed the actual shooting, the defense called into question his point of view based on surveillance video from Cracker Barrel. 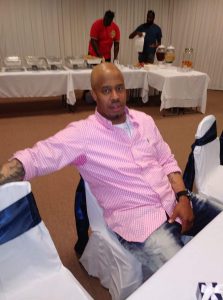 Other images shown by the state included wide shots of the scene, photos of cell phones, a photo of a Gatorade bottle and other items found inside the truck.

Detectives with the Metro Area Crime Center were unable to complete forensics on the cell phones, Short said. This was due to investigators being unable to bypass security technology on the phones.

Short testified that he was called to the Trussville Police Department the morning after the shooting to take photos of Hancock.

Short said Hancock asked him to focus on his nose area when he was taking the photos.

Hanle also asked if investigators did an analysis of the liquid found in the Gatorade bottle to check for the presence of narcotics. Short said police did not.

On photos of Hancock taking the day after the shooting, Hanle asked Short if it appeared if Hancock’s left eye was bruised. Short said no. Short did say there was a scratch on his nose but that he couldn’t tell if any other part of his face was injured.

Hanle asked Short if he recalled being part of an interview with Robert Shepard immediately after the shooting.

“During the interview do you remember Mr. Shepard stating that Randy Young was on the passenger side of the car immediately prior to Mr. Young being shot?” Hanle asked.

“I do not recall that,” Short answered.

The defense ended cross-examination and the state responded by asking Short more questions. Danneman presented an envelope containing bullet fragments that were collected by the Jefferson County Coroner/Medical Examiner’s Office. Short confirmed after receiving the bullet fragments, the envelope was not altered in any way.

After a quick recess, the state called Jefferson County Chief Medical Examiner Dr. Gregory Davis to the stand. Davis performed the autopsy on Randy Young’s body. The forensic pathologist determined the bullet entered the head and broke into two pieces. One piece exited through the top of Young’s head and the other part traveled through the brain.

“Mr. Young died of injury to his brain caused by this gunshot to the head,” said Davis.

The prosecutor asked if the injury Young sustained was recoverable. The medical examiner said it would not be likely but that there have been cases where people have survived. He said if he would’ve survived, he likely would have not been capable of making any “purposeful movement.”

Defense attorney Hanle showed photos of the dead victim again and focused on an abrasion on Young’s right hand when cross-examining the medical examiner. Davis said the abrasion could have been caused by Young punching Hancock. Furthermore, Davis said there were no muzzle marks on the victim’s head, showing the tip of the gun was not touching his head when the gun was fired. He said the gun was further than an inch away from the victim’s head as well.

The medical examiner confirmed there did not appear to be any alcohol or illicit drugs in Young’s system at the time of the shooting.

Property Clerk Claire Jackson, with Trussville PD, was called to the stand by the state. She testified about the evidence room in the police department. Jackson said she transported evidence to the Alabama Department of Forensic Sciences in Hoover. She confirmed the items were sealed during transport. The defense chose to not cross-examine Jackson.

Forensics Firearm expert Damon Cooper, with the Alabama Department of Forensic Sciences, took the stand after a lunch break Wednesday. Cooper reviewed the firearm, a spent shell casing and bullet fragments from the Cracker Barrel parking lot shooting. The primary examiner of the evidence was unable to be in court so, Cooper, who reviewed the evidence and performed the same tests for the Department of Forensic Sciences was called to testify. Cooper said test fires on the Glock pistol were performed and determined the gun that was entered into evidence was the gun used in the shooting death of Randy Young.

The state rested its case and defense witnesses began being called Wednesday afternoon.

The first defense witness was Matthew Jeffers, who was the driver of the truck that Hancock was traveling in on the night of the shooting. Jeffers said that earlier in the day, he and two others, including Bryan Hancock, went to a house to get drugs. He then dropped off the other friend at Cracker Barrel, where the friend worked. After dropping off the friend, he said that he and Hancock went to get a haircut. Jeffers and Hancock went back to Cracker Barrel to pick up their friend from work around 9 p.m. He parked in a parking space beside the victim’s car and parked in a way the victim’s vehicle could not leave, according to the victim’s stepfather.

Jeffers left Hancock in the truck and walked towards Cracker Barrel. That’s when he came into contact with Robert Shepard, Young’s stepfather. He said Shepard asked him to move his truck and he didn’t because he wasn’t going to be long. At that time, he said he asked Shepard for a cigarette. Shepard gave him a cigarette and Jeffers said he went back inside to get his friend and place a to-go order. When he came back out, Jeffers said Shepard asked him to move the truck again.

Jeffers said he remembers Hancock being by the truck’s tailgate when he came outside. He said he doesn’t remember specific words being said but he noticed Hancock and Young were exchanging words. Jeffers said he felt the tension. He said he never heard Hancock say anything of racial nature but he said he could tell Young was frustrated.

Jeffers got in the truck in order to move the truck. Hancock, who had gotten out of the truck, then got back into the passenger’s seat, said Jeffers. He said at that time, he saw Young come up to the truck and “strike Bryan in the face.” Jeffers said Hancock pulled the gun and shot Young within seconds of being hit in the face.

Jeffers admits he called the shooting “unnecessary” right after it happened. He said he told Hancock to call 911 after he went and checked on the victim.

Hancock and Bryan have been friends since middle school and Jeffers testified he had never seen Hancock act violent before the shooting.

The next witness for the defense was Kelli Orozco, who was leaving Cracker Barrel with her family just before the shooting happened. She testified she saw Hancock and Young arguing over the way the truck was parked. She said she heard Young tell Hancock to “move this f***ing piece of s**t!” at least three times. Orozco said she thought Hancock was drunk and she thought he was more aggressive between the two, based on body language. She also said she told her husband they needed to leave because she had a feeling things would escalate.

Orozco’s husband, Robert, was later brought into the courthouse in handcuffs after not showing up to testify. He did testify and gave a similar account as that of his wife.

“I don’t think Mr. Hancock knew where he was at at the time,” said Robert Orozco. He said Young seemed upset and testified that by the way the truck was parked, he would have been upset as well. He added he never heard a racist comment made by either party.

Hancock is considered innocent until proven guilty and his attorneys claim the shooting was in self-defense after the victim punched him in the face while he was sitting in the passenger’s seat of a truck.