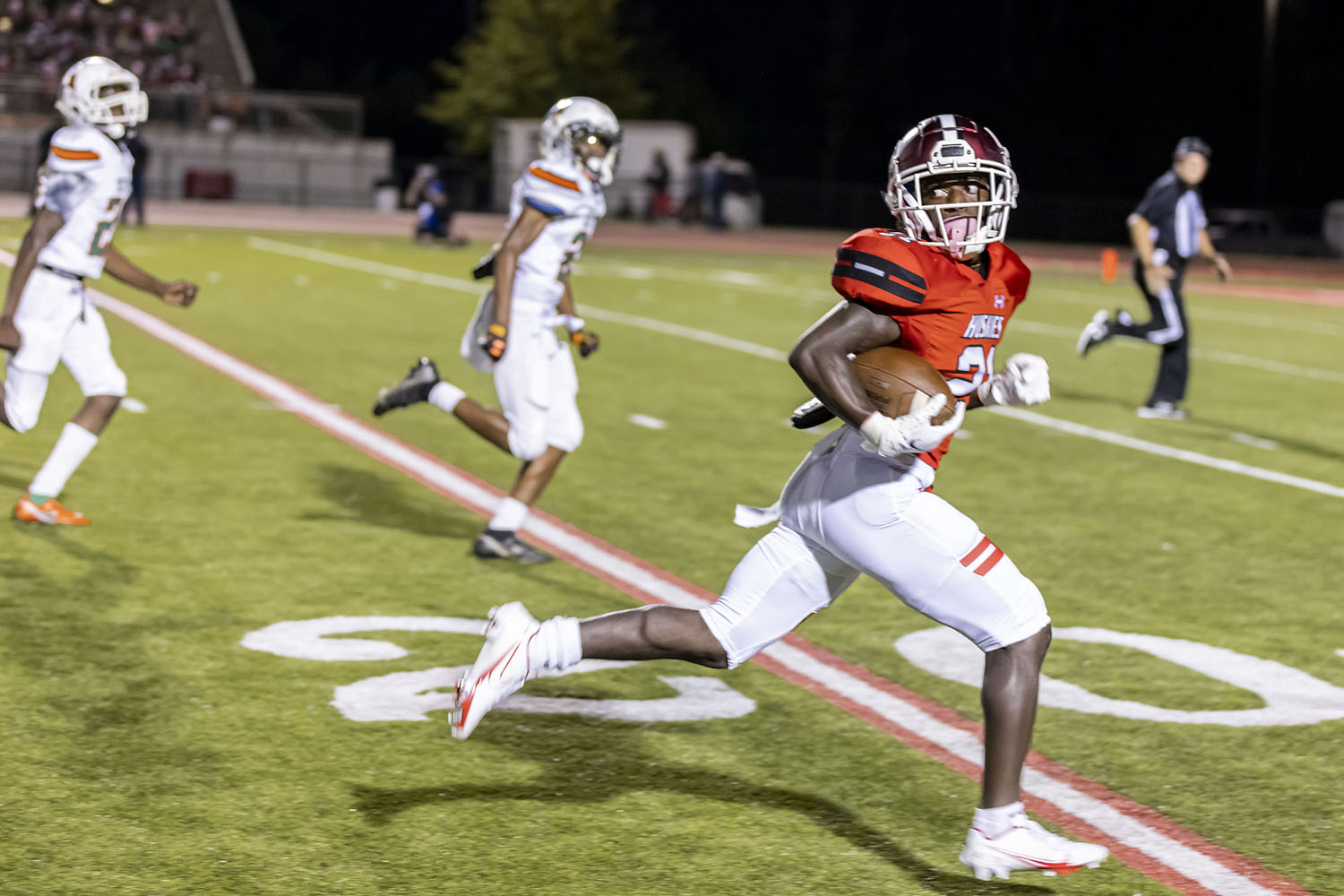 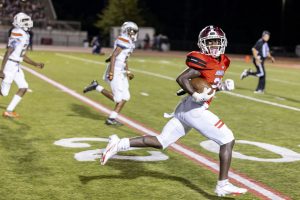 Hewitt-Trussville senior Connor Thomas ran past everyone on a 62-yard touchdown jaunt during Hewitt-Trussville’s 60-19 homecoming victory over Huffman on Friday, September 24, 2021. (Photo by Ron Burkett)

On this night, the Hewitt-Trussville offense clicked, and so did everything else. Cade Ott Carruth threw three touchdowns, Justice Finkley recorded a pair of sacks, the Huskies recorded a safety and recovered a fumbled kickoff return by Huffman.

James Hammonds opened the scoring for the Huskies on the fourth play of the game, going 13 yards to pay dirt. The Huskies elected to go for a two-point conversion, and Donovan Price ran the ball into the end zone for an 8-0 lead with less than a minute gone in the game.

After giving up a 38-yard run for a first down on the second play of Huffman’s first possession, the Hewitt-Trussville defense woke up. A pair of incompletions by the Huffman offense and a sack by Finkley led to a punt and possession for the home team. In short order, Carruth hit Hammonds for seven yards, and then threw back-t0-back completions to senior wideout Omari Kelly, who took the second pass 32 yards to the end zone.

CJ Curtis added the extra point, and the Huskies were up 15-0 with 8:12 to play left in the first quarter.

After the Hewitt defense forced Huffman into a three-and-out and a punt from their own 19, Riggs Dunn returned the punt all the way back to the Huffman 20-yard line to set up a one-play scoring drive. Carruth his a sliding Ryan Shoop for a score. Curtis’s PAT made it 22-0 with 5:46 left to play in the quarter.

After another defensive stop, it looked like penalties might stymie the next offensive possession for the Huskies. A pair of penalties put Hewitt-Trussville way behind the sticks for second-and-32, but then Connor Thomas went to the right side, found the corner, and was off to the races; 62 yards later, Thomas scored. The extra point made it 29-0 with 2:56 left in the first.

Carruth wasn’t done throwing touchdowns. On the next possession, the senior signal-caller found Cayson Zackery for a 67-yard touchdown with 53 seconds left in the quarter. The PAT made it 36-0.

Hammonds opened the scoring in the second quarter with another 13-yard touchdown, going straight up the gut, untouched on fourth down. After the extra point, the Huskies led 43-0 with 11:48 remaining in the second.

A holding penalty put Huffman on its own 8 to start the next drive, but a Bam White sack on third down made it 4th-and-13. A fumble on the punt attempt resulting in a safety, making it 45-0.

Huffman held the Huskies on Hewitt’s next drive. CJ Curtis lined up for a long field goal but missed to the left, so Huffman took over on its own 20, having some early success running the ball. With just under 6 minutes left in the half, the Vikings finally earned their second first down of the game.

That success didn’t last, as linebacker Hunter Jones sniffed out a screen pass to kill the Huffman drive in its tracks.

Peyton Floyd took over as quarterback the rest of the way, leading the Huskies on a five-play scoring drive capped by a 28-yard pass to Jordan McCants for a touchdown.

With 1:38 left in the half, Hewitt-Trussville led 53-0. The extra point snap was bobbled, so Shoop — the holder — bootlegged to his right and found Braylon Chatman in the end zone for a two-point conversion to take a 53-0 lead.

Up with a huge cushion, the Huskies pulled most of their starters on defense, so Huffman was able to move the ball down the field on its next possession, ending with a circus catch by Shamaur Gatson to get the Vikings on the board with 14 seconds left for a 53-7 margin at the half.

Huffman would score twice more against the Hewitt-Trussville subs. The Huskies were shuttling personnel in and out, with the majority of the 102-player roster getting meaningful playing time. Jaqson Melton even blocked an extra point after the second Huffman score with 1:56 left in the third quarter.

Next up for the Huskies is region foe Hoover; Huffman plays Homewood next.