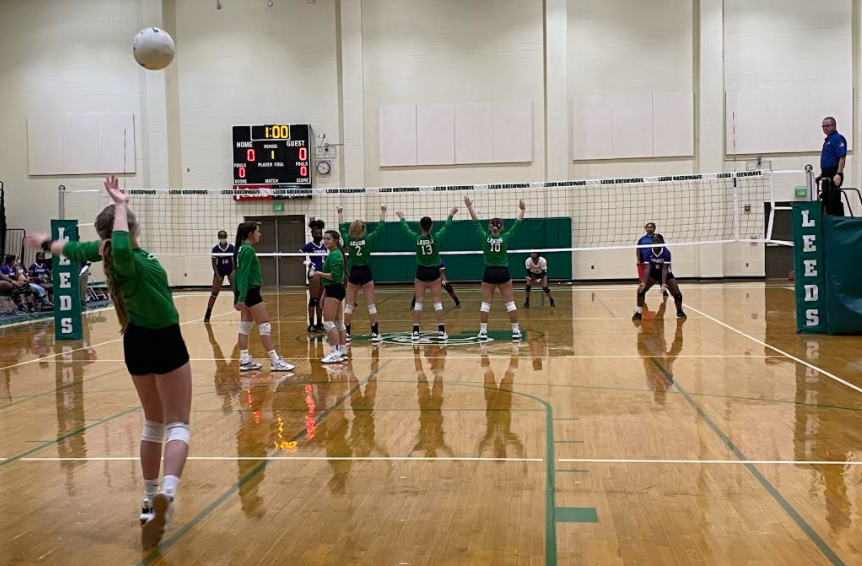 Senior setter Briana McLaughlin serves for the Green Wave during the Wednesday, October 13, 2021 5A Area 10 tournament. (Photo by Bobby Mathews)

LEEDS — Leeds High School closed out the 5A Area 10 volleyball tournament here Wednesday afternoon without dropping a set, as senior Hannah Scott held serve for the final seven points of the match.

Senior setter Briana McLaughlin serves for the Green Wave during the Wednesday, October 13, 2021 5A Area 10 tournament. (Photo by Bobby Mathews)

The Green Wave trailed most of the third set against Parker, falling behind 11-6 and then clawing back to 11-12 finally after Emma Grace Payne  stepped up for a huge kill, but Leeds couldn’t manage to get over the hump. Then Lilia Martinez stepped up with a kill to bring it to 12-13 before Hannah Scott tied things up at 14-all. The teams battled back and forth, with neither being able to pull away.

“I’m definitely proud of this team and what they’ve accomplished,” Leeds coach Erin Wright said. “We worked really hard to work faster, to work as fast as we could, and I think we accomplished that in the last couple of sets.”

The Green Wave won the first two sets against Parker, 25-13 and 25-17, putting themselves into position to close out the tournament in straight sets, but it wasn’t easy.

“I think we lost a little bit of focus there in the third set,” junior outside hitter Darcy Phillips said. “But I also think that we were able to recognize when we had the momentum and capitalize on it.”

As the host team, Leeds was favored to win the area title. They were 4-0 in area matches, and 12-1 at home going into Wednesday’s matchups. After Wednesday’s games, they are now 18-10 on the season overall.

“I mean, I didn’t expect anything less from us,” senior setter Briana McLaughlin said. “This wasn’t the best we’ve played, either. There were a lot of communication errors, but those are things we can work on.”

They’ll work on them before the Regional tournament next week.

The Green Wave took out a game Center Point squad in the first round of the tournament, 25-10, 25-15, 25-4. Parker beat Carver to advance to the finals of the tournament in the 2 p.m. match.

Hewitt-Trussville will play in the 7A Area 6 tournament against Vestavia Hills at Spain Park at 4:30 p.m. on Thursday, October 14. The Huskies are 2-4 in the region and 15-13 overall.