Pedestrian struck on Highway 79 in Pinson

PINSON — A male pedestrian was struck in Pinson on Sunday, October 31, around 7:30 p.m. 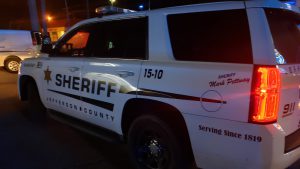 According to the Jefferson County Sheriff’s Office, deputies received a call from a female stating that she believed she had struck a person dressed in dark clothing on Highway 79. However, when deputies arrived on the scene, they could not locate a victim after several hours of searching.

Shortly after sunrise, deputies were again dispatched to the 4200 block of Pinson Valley Parkway, where a body of a white male had been spotted.  It is believed that the located individual was the victim of the reported incident the night before.