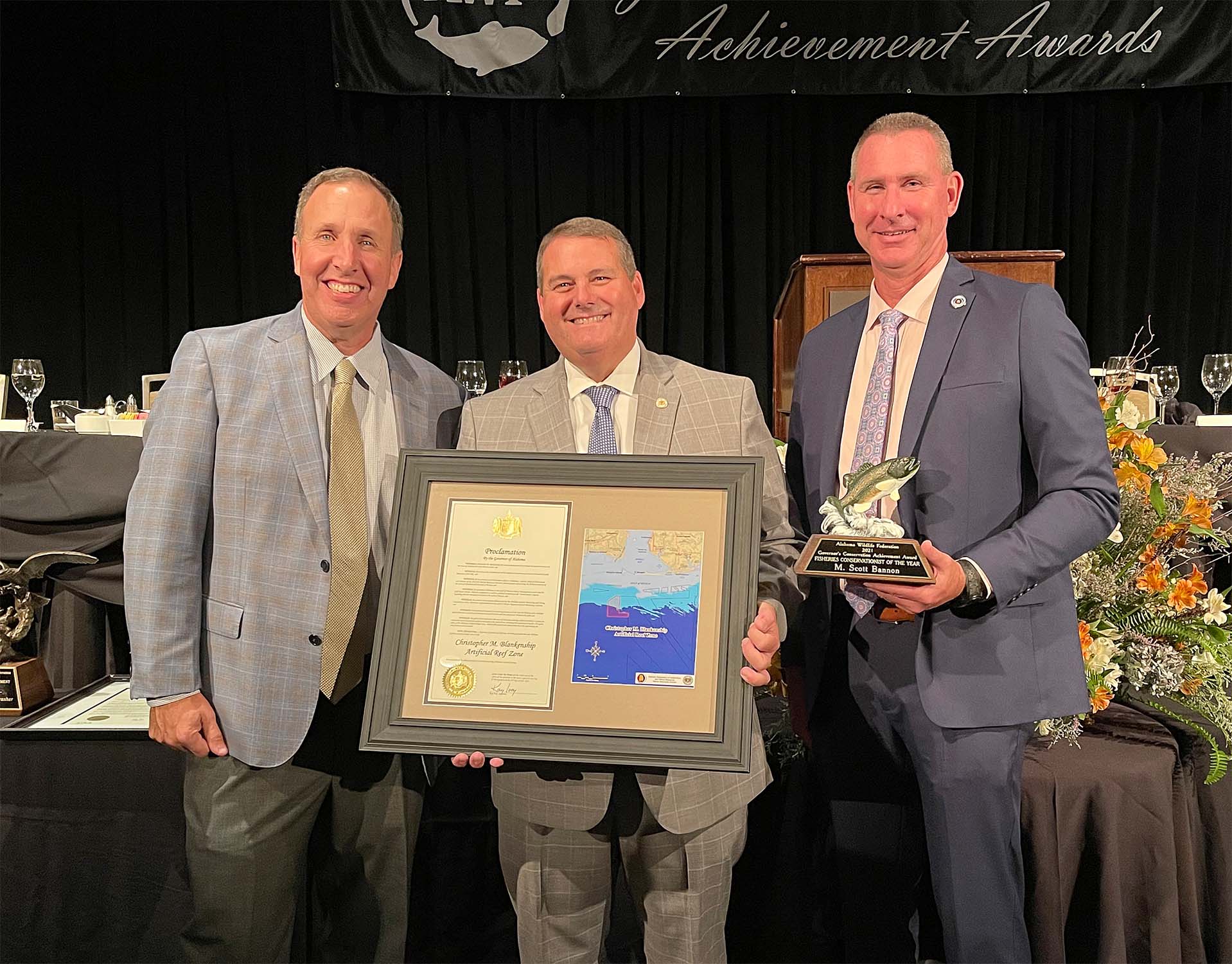 At the recent Alabama Wildlife Federation Governor’s Conservation Achievement Awards, Chris Blankenship didn’t know he would be one of those recognized for contributions to the vast natural resources Alabamians enjoy. 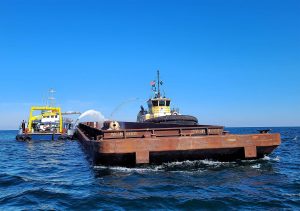 The super reefs currently being deployed are 25 feet tall with 164 to be placed in the Blankenship Reef Zone. (Photo courtesy of ADCNR)

Blankenship, Commissioner of the Alabama Department of Conservation and Natural Resources (ADCNR), received a proclamation from Governor Kay Ivey, designating an area off Dauphin Island as the Christopher M. Blankenship Artificial Reef Zone.

The Blankenship Reef Zone covers 63 square miles offshore of Dauphin Island, with water depths varying from 75 to 110 feet. The new reef zone, permitted in August 2021, starts about 10 miles southwest of the Sand Island Lighthouse and extends 16 miles to the southwest.

“I am very humbled and honored to have my name forever attached to one of the artificial reef zones off the coast of Alabama,” Commissioner Blankenship said. “It was a very nice surprise for Governor Ivey to provide that proclamation, with the help of Deputy Commissioner Ed Poolos and Marine Resources Division (MRD) Director Scott Bannon, at the Alabama Wildlife Federation Governor’s Conservation Achievement Awards Dinner. It was also a blessing to have that proclamation presented with my wife, my children, my parents, most of our senior ADCNR staff, and several hundred other conservationists present at the dinner. That really makes it memorable.”

Blankenship grew up on the Alabama Gulf Coast and has always been connected to the Gulf of Mexico.

“I went to work on a charter boat at 14 years old, fishing in the waters off Dauphin Island,” he said. “I have fished there with my dad, my wife and children, and many friends over my lifetime. I have patrolled those waters as a Conservation Enforcement Officer and have had the opportunity to be involved with permitting new zones and sinking thousands of reefs. To know my name will perpetually be associated with a place that is so special to me personally is really awesome.

“So many people have worked very hard over many years off the coast of Alabama to build the largest artificial reef complex in the country. We have successfully obtained funding and fostered partnerships that have added thousands of reefs in the reef zones. This reef-building success has led to Alabama being known as the ‘Red Snapper Capital of the World.’ This not only brings enjoyment to thousands of anglers, but it provides millions of dollars of economic benefits to business and individuals in Alabama.”

Despite having the largest artificial reef program in the nation, if not the world, ADCNR continues to strive to make improvements.

“Even though we already have had a very good artificial reef program for several decades, we have not rested on our laurels,” Commissioner Blankenship said. “Beginning a few years ago, we permitted nine new reef areas within 9 miles of shore, in state waters, and have worked to build new reefs in these zones. In 2021, we received a Corps of Engineers permit to expand those nearshore zones as well as increase the offshore zones another 63 square miles. We have obtained more than $30 million in funding from the National Fish and Wildlife Foundation Gulf Environmental Benefit Fund and other sources to add several thousand reefs offshore, nearshore, and inshore to provide recreational opportunities for people with boats both big and small.”

When Blankenship was the MRD Director, before becoming Commissioner, the Division implemented a Rigs-to-Reef program to take decommissioned oil and gas platforms and convert them to large artificial reefs. This has resulted in numerous large reefs that will provide benefits for decades. 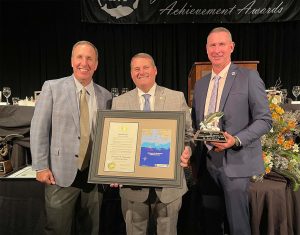 “All of the reef zones are named for people and organizations that were pioneers in the fishing, research or the conservation world and that have made great contributions to Coastal Alabama,” Commissioner Blankenship said. “To be associated with such a distinguished group is truly humbling. I am so thankful that some people thought enough of my life’s work to ask the Governor to include me in such a fine group by attaching my name to an Alabama artificial reef zone.”

MRD Artificial Reef Coordinator Craig Newton said contracts are being executed to deploy 456 super pyramid reefs. A total of 164 of these modules will be deployed in the Blankenship Reef Zone, while the remainder of the super pyramids under the contract will be placed in several other reef zones offshore of Alabama.

The super reefs are 25 feet tall and built of concrete with limestone rocks embedded in the concrete. The super reefs feature a large interior void space that provides refuge for a wide range of reef inhabitants.

“Those include adult gray snapper, gray triggerfish, and red snapper,” Newton said. “Those reefs 35 or more miles offshore provide much-needed habitat for greater amberjack and various grouper species. It’s not odd to have a goliath grouper take up residence inside some of the large pyramids.

“These reefs are extremely productive in producing vermilion snapper too. So much so, the federal for-hire fleet is able to make trips just to target vermilion snapper outside of red snapper season. The more charter trips they make, the more the reefs support the state’s economy.”

“Ultimately, it’s going to provide habitat in an area that historically has produced relatively large red snapper,” Newton said. “Given the placement and the nutrient-rich effluent coming out of Mobile Bay between Dauphin Island and Fort Morgan, the new zone has a significant amount of production potential. With this reef zone and the juvenile reefs in the 6- to 9-mile zones, we expect it to be extremely productive for decades, maybe even centuries.

“This reef zone is properly dedicated to the most appropriate conservationist, at least in my tenure at Marine Resources. For someone who has committed his professional life to the great fisheries we have, we’re proud to have this named the Christopher M. Blankenship Artificial Reef Zone.”

As part of an $8.135 million expansion of the Alabama Artificial Reef Program, 1,203 juvenile reef fish shelters are being deployed in the newly expanded 6- to 9-mile reef zone.

“These juvenile reef fish shelters will provide unique habitat in a transitional zone between inshore habitat and offshore habitat that will allow reef fish to utilize them from juveniles to adults as they move offshore,” Newton said.

Species like gray (mangrove) snapper spend their early life stages inshore. As they grow, they move to the nearshore area before moving offshore. The new juvenile reefs will provide supplemental habitat as the fish transition from early life stages to recruiting to the adult population offshore. Additionally, the new habitat also provides spawning opportunities for species likes sheepshead.

Newton also said Southern flounder should benefit from the juvenile reefs. Flounder numbers have been historically low in Alabama waters for about a decade, but signs of a turnaround have been seen lately.

“The past two to three years, we have seen an increasing abundance of Southern flounder,” he said. “The timing goes along with several management decisions by the Marine Resources Division. We increased the size limit (14 inches), reduced the daily bag limit (5 per person), and instituted a November closure to protect the spawning run. We’ve also had several (Claude Peteet) hatchery releases to supplement the juvenile population. 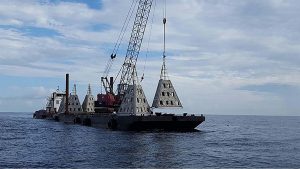 A decommissioned boiler from Alabama Power was recently deployed as an artificial reef in the AWF Reef Zone. (Photo courtesy of ADCNR)

“We’ve also made some habitat improvement that could be beneficial to southern flounder. Flounder migrate from inshore to the nearshore zones to spawn in the fall. Now that we have a significant amount of habitat in those areas that were once bare-bottom, unstructured substrate, we hope it will help facilitate continued growth in the flounder population.”

The newest deployment in the nearshore zones resulted from a partnership project between MRD and Alabama Power. A large package boiler was taken out of service at Alabama Power’s Washington County Cogeneration Facility near McIntosh.

“It was going to be fairly expensive to decommission and disassemble using traditional methods,” Newton said. “Alabama Power grouped up with Cooper Towing and placed the boiler onto a barge and towed it to the Alabama Wildlife Federation Reef Zone in about 62 feet of water. With the boiler inside a hopper barge, they cumulatively make a rather large reef with 15 feet of vertical relief. It was reefed about 8 miles south of Dauphin Island.

“This was another unique and extremely beneficial project where state resource managers and industry partnered for conservation benefits and cost savings to customers of Alabama Power.”