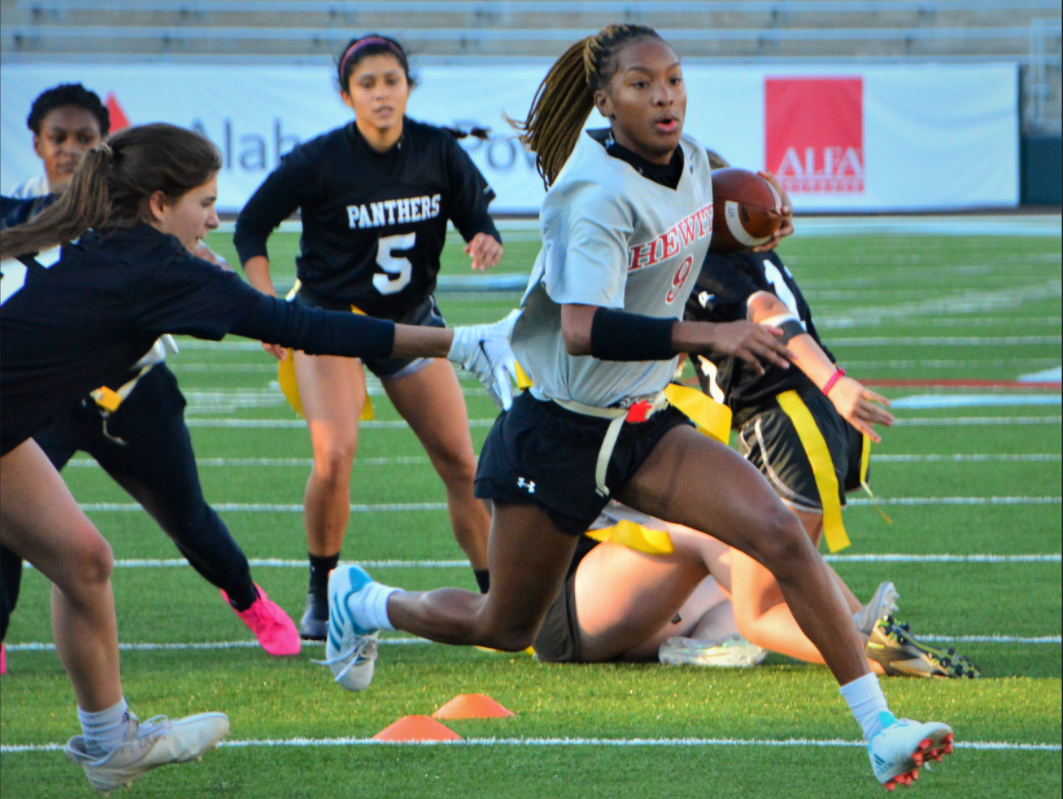 The Hewitt-Trussville Huskies ran into the record books with a double-overtime win to become the first-ever AHSAA flag football state champions. (Photo by Jo Rudick) 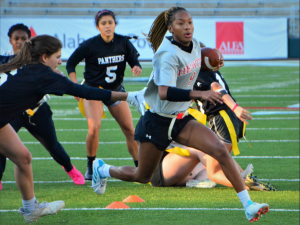 The Hewitt-Trussville Huskies ran into the record books with a double-overtime win to become the first-ever AHSAA flag football state champions. (Photo by Jo Rudick)

That’s why they’re The Tribune’s Team of the Week for the final week of the 2021 season.

The Huskies stopped Smiths Station in double overtime, prevailing by one, 14-13, when Deandrea Powell hit Hannah Dorsett in the middle of the end zone to score the game’s deciding point.

Dorsett’s grab overcame Smiths Station’s late-game heroics, when the Panthers scored a game-tying touchdown with 12 seconds to go before the Huskies (11-0) stopped the extra point pass to force overtime.

Smiths Station got the ball first in the second overtime, and Brynn Repicky’s pass to was no good when Emily McGuire came down with her foot on the out-of-bounds line.

Hewitt-Trussville quickly got its offense on the field for the next play, and Dorsett’s catch ended it. Burt noted that four Huskies played both ways, so they had to shake off the euphoria of stopping Smiths Station and immediately refocus for the game-winning play.

The play was the same one that the Huskies have used all season, Dorsett said on Tribune Sports Live on Monday evening. She’d been open on the previous attempts, but on the game-winner, a defender was shoulder-to-shoulder with her. Dorsett grabbed the ball and held on.

“Hey, we did our job, and now we have to finish,” Burt said to her team prior to sending them out for that last extra point try. And finish they did.

Smiths Station took the opening kickoff and drove for an immediate score, as Repicky scored on a 1-yard run. She connected with McGuire for the extra point and a 7-0 lead with 7:34 to go in the first quarter.

The Huskies cut the deficit to 7-6 on Powell’s 10-yard run with 3:32 to go in the first quarter. Hewitt then took the lead on Audre Benson’s 6-yard run with 1:44 to go before halftime. Powell’s point-after pass to Avery Huffstutler made it 14-7 at the half.

Still trailing 13-7, Smiths Station got the ball for a final drive with 51 seconds to go. The Panthers drove 51 yards in five plays, with Repinky scrambled and fired a 26-yard touchdown pass to McGuire to make it 13-all with 12 seconds to go.

Hewitt-Trussville stopped Smiths Station’s point-after to force overtime in a 13-all deadlock.

Powell finished 18-of-22 passing for 161 yards, and Benson finished with 57 yards rushing on seven carries and 67 yards receiving on six catches.

The AHSAA’s Josh Bean contributed to this report.