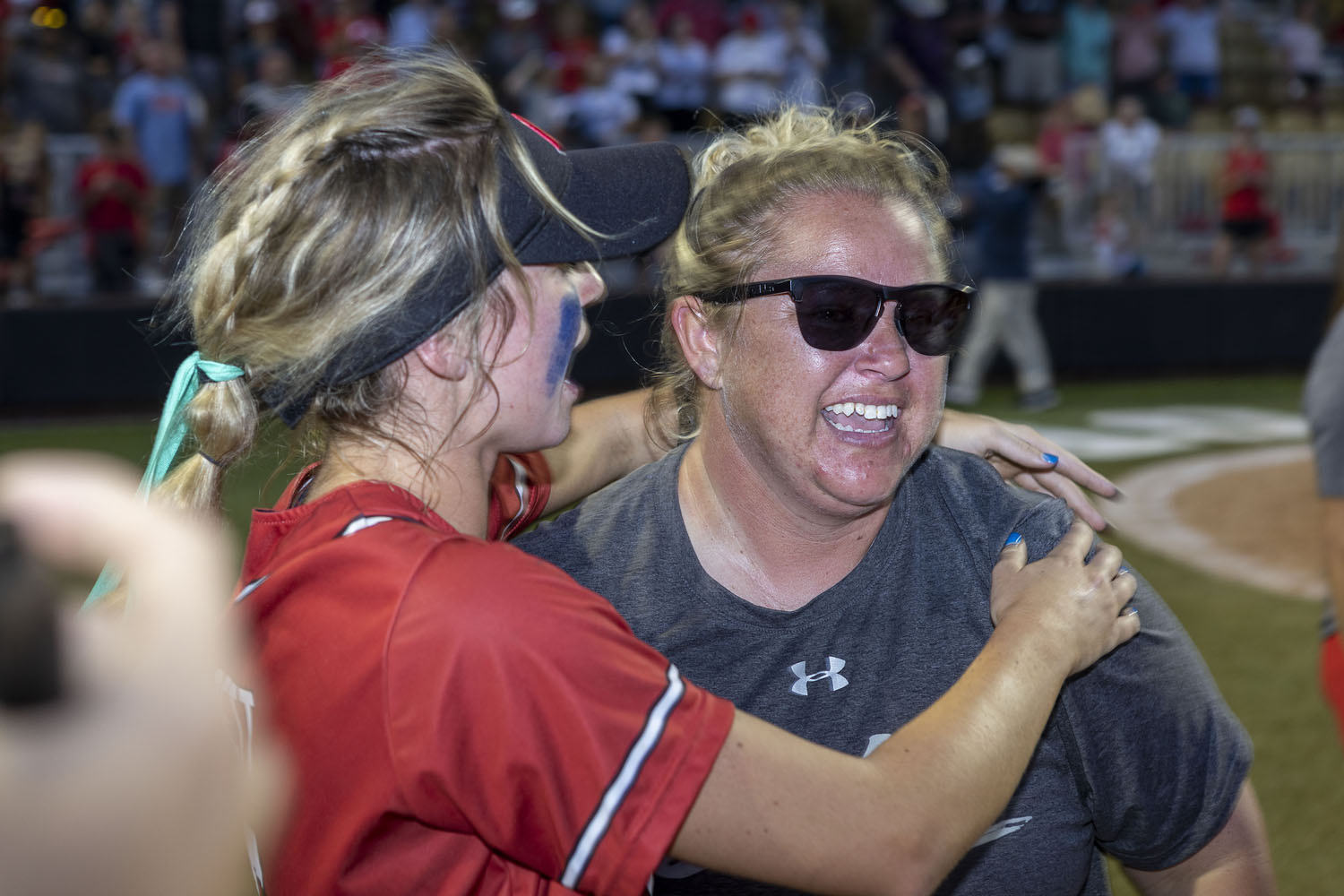 Hewitt-Trussville softball coach Taylor Burt celebrates with her team in Choccolocco Park on May 21, 2021. Photo by Ron Burkett

TRUSSVILLE — Hewitt-Trussville softball coach Taylor Burt was apologetic when she called a little after 8 p.m. for an interview that had originally been scheduled for early in the afternoon. With softball season ramping up — the Huskies play February 17 at Wetumpka — the days are long. She’d been on the field with the team or working individually with players since around 1 p.m., and wasn’t able to call until she’d finally finished up. 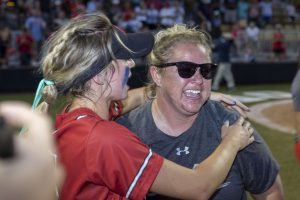 Hewitt-Trussville softball coach Taylor Burt celebrates with her team in Choccolocco Park on May 21, 2021.
Photo by Ron Burkett

That’s Burt in a nutshell, though, that kind of work ethic that earned her the National High School Coaches Association Softball Coach of the Year award. It’s one of the reasons she’s led Hewitt-Trussville to consecutive state championships in softball, as well as co-coaching the Huskies to the state’s first-ever flag football title. It’s why she’s the reigning AHSAA 7A Softball Coach of the Year.

Coaching is, quite literally, in Burt’s blood. Her mother has coached cheerleading for “27 or 28 years,” Burt said, and her father coached basketball and softball. And in her own coaching career — 11 years now, with stops at Fort Payne and North Jackson — she’s learned a thing or two about how to put together a successful program. One of the things she does, almost always, is credit others with her level of success.

When presented with the NHSCA coach of the year award, Burt was quick to point to her players and assistants.

“I have a lot of support and people around us,” she said at the time. “We have an incredible coaching staff that works hard even though we carry some crazy hours and do some crazy things. They are 110 percent behind our girls, and our girls work hard, so I can take zero credit for this.”

On the phone, she says something similar: “I think I do a good job of surrounding myself with people whose strengths are my weaknesses.”

That’s not false humility. Softball is a team sport, after all, with every player knowing their role and embracing it. Burt knows that. So even when she’s asked what makes her a good coach, Burt said she thinks it’s not what she does on the field that sets her apart.

“I think the thing I try to do is create relationships over results,” she said. “I’m not always great at it, but I try to love the kids as a person first, and as a player second.”

Now, more than a decade into her career, Burt says she’s changed and grown as a coach, and credits that personal growth with much of the success she’s seen as the skipper for Hewitt-Trussville.

“It took learning about people,” she said. “When I first started, I thought the tougher I could be, the better. Now I try to provide a little more grace for the players, I think.”

That’s not to say that Burt isn’t demanding. She is. She knows what it takes to win, and the level of talent and dedication in her team shows what’s expected when those girls put on a Hewitt-Trussville uniform. Away from the field, Burt is pleasant, kind, low-key hilarious if you talk to her for long enough, with the delicately dangerous sense of humor that a lot of former athletes possess. But on the field, she’s all business. It’s like a switch has flipped, and now she’s all intensity and concentration.

“I think that’s just the competitiveness in me,” Burt said. “I want to compete at everything I do. I thrive with it. The second we step out there onto the field, it’s go time, and I want us all to have that go-getter mentality.”

That go-getter mentality has made some fantastic memories for Hewitt-Trussville’s softball program, like Hannah Borden’s walk-off homer in the 2019 state quarterfinals against Baker.

“That first championship in 2019, we weren’t favored to win that one,” Burt said.

The Huskies were down 11-9 in the final inning of a game that had been delayed for about four hours due to inclement weather. With two outs and no one on base, the bottom half of the lineup came alive for the Huskies. After one Hewitt-Trussville player reached base, Abigail Dorsett hit a grounder to second base. It should have been an easy out for Baker. It should have eliminated the Huskies.

Instead, the first basewoman couldn’t find the bag.

“She was probably three or four inches off the base, and on video you can see her trying to find the bag,” Burt said. “The umpire was right there.”

By the time she did find the base, Dorsett had reached safely. That brought up Hannah Borden. The 5-10 senior — now playing at Southern Miss — could bomb it from the plate, but she’d been walked “50-something” times that season because of how dangerous she was, Burt said.

With Burt watching from the third-base coach’s box, Borden smashed two long fly balls over her coach’s head. They were just foul. The Baker pitcher went outside on the next pitch, and Borden went with her. The ball flew over the right-field wall, and Hewitt-Trussville had the win and a ticket to the semifinals.

“We stayed up until 3 a.m. washing uniforms, because the girls said they weren’t going to wear any other uniform the next day,” Burt said.

Who can blame them? That 2019 team felt like a team of destiny after that, mowing through Auburn in the semis and taking down Sparkman in the finals to claim the state championship.