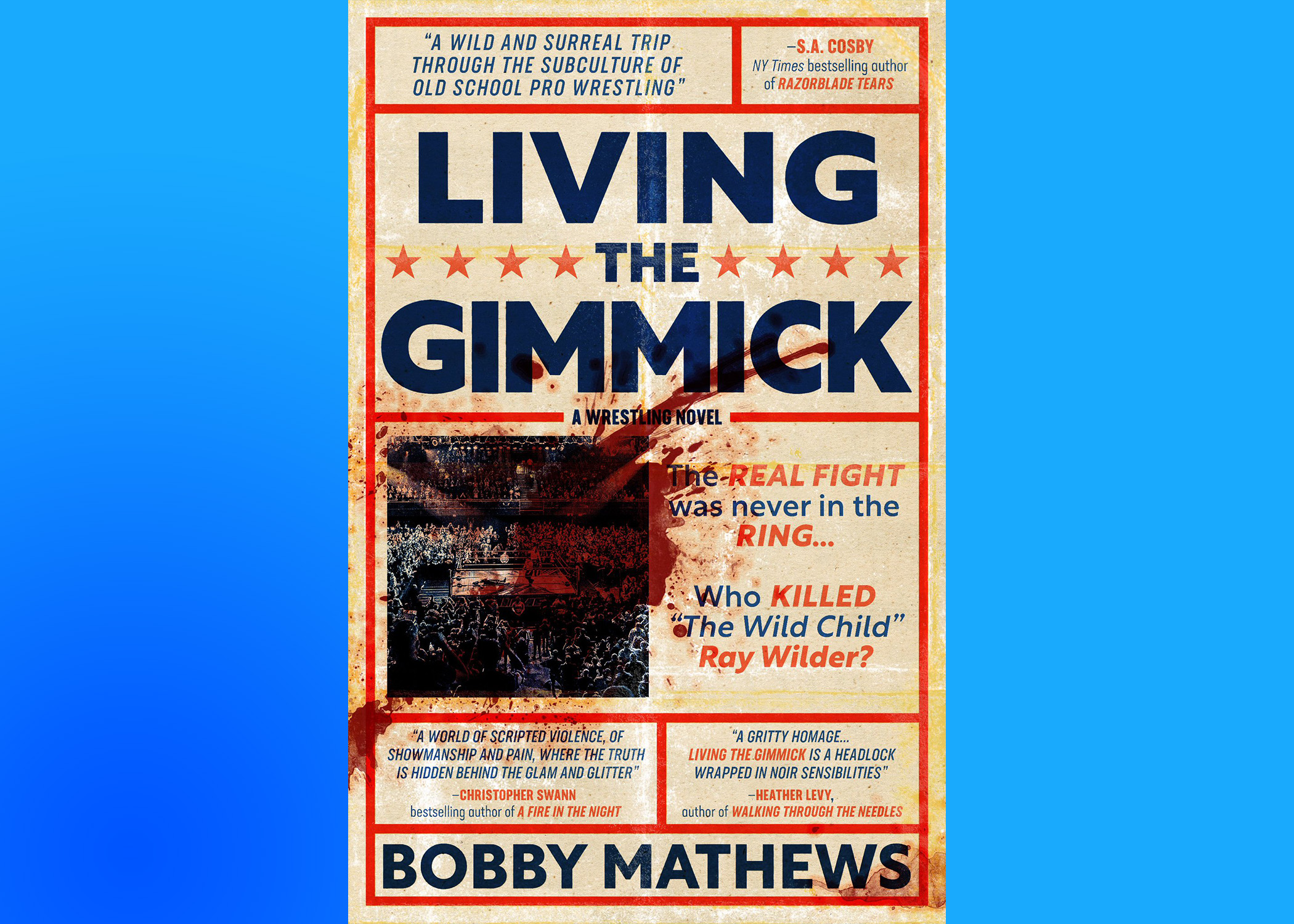 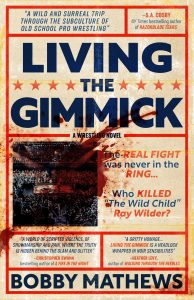 He drew on those memories to write his latest book, Living the Gimmick, which comes out Friday, May 27, from Shotgun Honey Books.

“I blame my Dad for my love of wrestling,” Mathews said. “When my parents bought a house in Enterprise, I was four years old. The first TV show I can remember watching was wrestling every Saturday at 5:30 p.m. Like a lot of kids, I went through some difficult years as a teen. Wrestling was the thing that my Dad and I could always bond over.”

Mathews drew on his memories of southern territory wrestling as well as hours of research in order to write the novel. It’s a murder-mystery, with half of the novel set in flashbacks to the 1980s, and half of it set in a modern sports entertainment show at the Boutwell Auditorium in Birmingham.

The book hinges on a central theme: When the most famous pro wrestler in the world is murdered, his best friend must navigate the current world of ‘sports entertainment’ to find the killer.

“At times a wild and surreal trip through the subculture of old school pro wrestling and at other times a deft love letter to the passions that drive us all, Living the Gimmick is a rollicking good time,” Cosby said. “Bobby Mathews obviously loves three things: The South, pro wrestling, and a good mystery.”

Mathews will be signing copies of his book at DeDe’s Book Rack in Trussville on June 18, and he has several other signings and appearances lined up throughout June and July.

Birmingham author Hank Early, whose Southern-tinged crime novels hit close to home for many readers, also had high praise for the book.

“Mathews writes in smooth, almost transparent strokes that propel the narrative along with such force, you’ll read the entire novel in one sitting,” Early said. “The seedy world of wrestling and the badasses who populate it come alive on the page. Kayfabe? Hardly. This is as real and gritty as noir gets.”

Living the Gimmick is purposely written in a tight, lively style, Mathews said. It’s part page-turner, part literary homage to writers like Donald Westlake and Robert B. Parker, who Mathews lists as huge influences on his writing.

“I’m hoping that people who are fans of old-school territory wrestling and even fans of today’s more homogenized, bland ‘sports entertainment’ environment will enjoy the story,” he said.

Heather Levy, the author of Walking Through Needles, notes that the book works not only as an homage to pro wrestling, but as a reminder that sometimes the people we think we know best are actually strangers under the skin.

“Mathews’s impressive debut murder mystery is as much a gritty homage to the excessive, violent, glam rock world of professional wrestling as it is a testimony of how it’s evolved from its oftentimes ruthless heyday to the glitzy entertainment machine it is now,” Levy said. “LIVING THE GIMMICK is a headlock wrapped in noir sensibilities as it slams down a universal question: how much do we really know the ones we love and trust?”

Living the Gimmick is available for pre-order in trade paperback or e-book at Shotgun Honey Books, and it will be available through major retailers like Barnes & Noble, Books-A-Million, 2nd & Charles and independent bookstores everywhere.

For more information on the book and touring information, check out Mathews’s website, bamawriter.com.