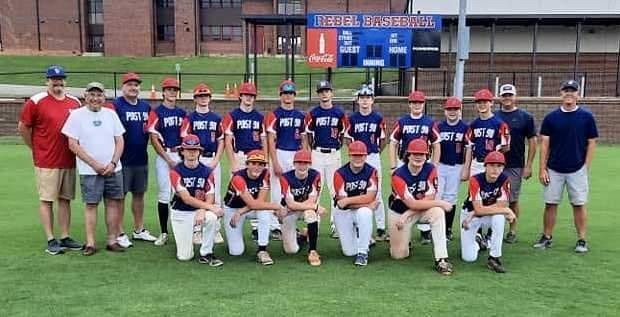 By Patricia. A. Douglas, Special to The Tribune

HOOVER — From almost not having a team and an opening game rainout to winning a state championship, the 2022 season will be one to remember for the Ryan Winslow Post 911 JV baseball team. 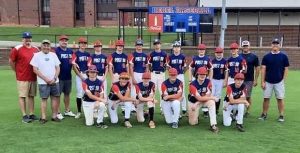 “Think about the thrills and memories and sense of pride those young men felt after achieving what only one team in our state could accomplish,” said Post 911 Commander Lynn Thomas. “They will carry this memory with them for the rest of their lives and you know as well as I do that it will instill confidence and courage in them that will affect how they will live.”

With the season just weeks away, there were barely enough players to even field a team, according to Tammy Johnson, coordinator of the junior varsity league.

“At one point, we had nine players,” Johnson said.

Rain also hampered the team with a lack of practice opportunities at the beginning of the season. In fact, before the first double header of the season, the team had only one full practice.

“The team itself was formed very quickly with little practice or time to get to know each other before our first games, so the season got off to a rough start,” said Head Coach Shane White. “We started out 0-6, then went 10-4 the rest of the way with two of those losses coming to a varsity opponent. I was very pleased with the boy’s progression. We peaked as a team at the perfect time by putting up a dominant performance at the state tournament.”

White sees the importance of the American Legion baseball program.

“There is an obvious need that Legion Baseball can fill for the kids that want a change from travel ball, want to get extra reps for school ball, need a true summer season to fit in between other sports in the spring & fall or just want to keep playing baseball,” he said.

According to Ryszkiewicz, recruiting for the 2023 team will begin earlier, and hopefully, the post will be able to sponsor two teams.

“Several people inquired about playing after the season had begun but our roster was already full,” said White.  ‘With a little marketing and advertising I think two teams should fill quite easily.”

About 10 members of the Post 911 family watched as the baseball team was honored.

“As commander of Post 911, I want to say thank you for sponsoring this team and providing them a chance to achieve this goal,” Thomas said. “I trust you will share the pride of accomplishment and character that our young men awarded themselves by becoming champions.”

According to the Alabama American Legion Baseball website, “Our focus is basic civics, sportsmanship and Americanism while playing our National game. We are reinforcing respect to our flag, the rights and privilege of being a citizen in this great nation and respect for those that pay the price of freedom. We play the National Anthem before each game and encourage Legionnaires and other veterans to attend the games and wear Legion or service caps and talk to the players and parents to support and encourage them to be responsible citizens.”

Players on the roster: