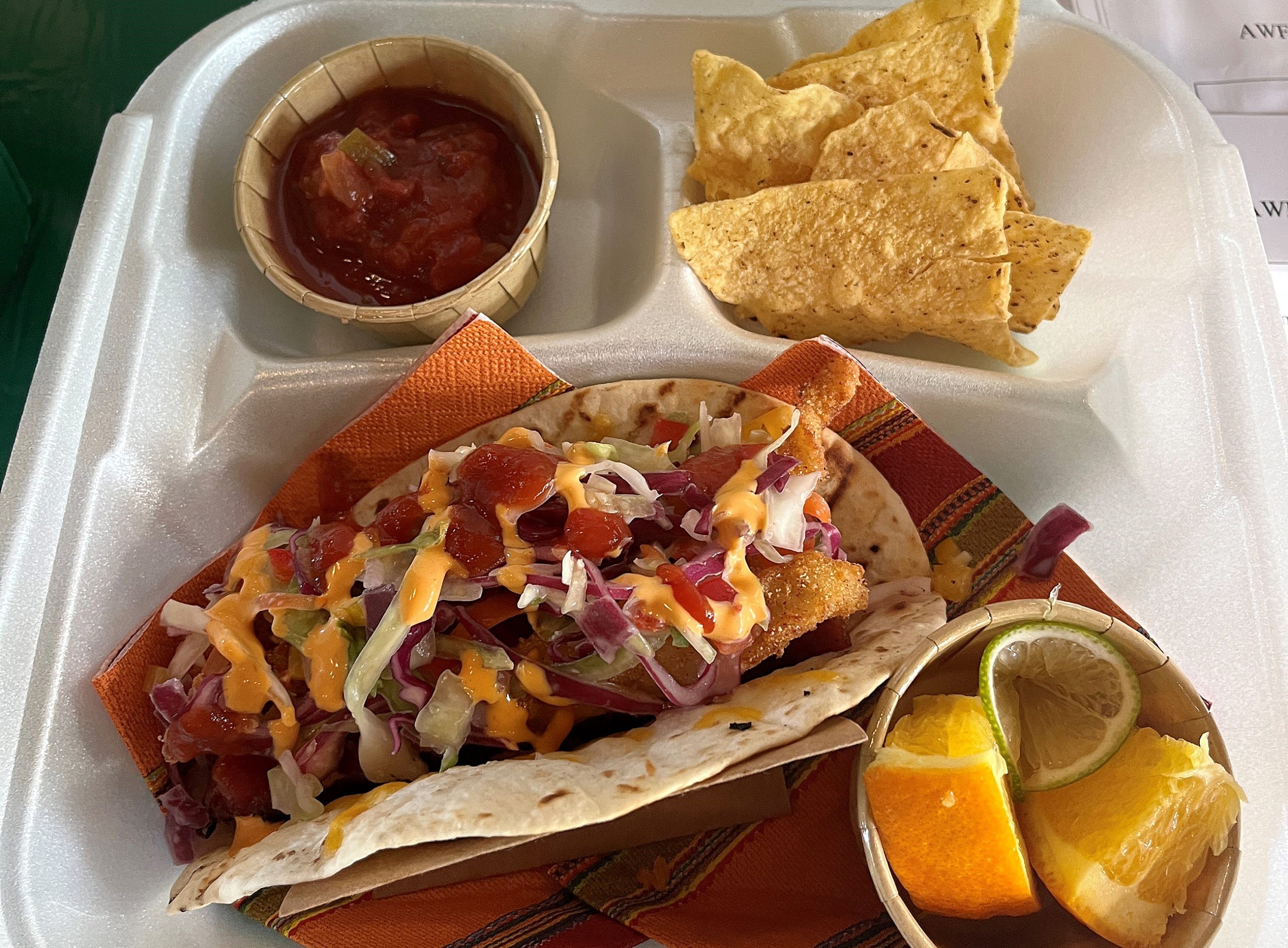 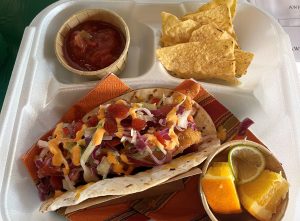 Two of the top three recipes used spotted bass as their centerpieces, while a tasty bream dish rounded out the winners.

“AWF’s Wild Game Cook-Offs prominently display that responsible hunters and anglers properly utilize the game and fish that they harvest, and it makes great and healthy table fare,” said AWF Executive Director Tim Gothard. “At the State Finals, the best of the best is on full display.”

Alabama Ag Credit’s Taco Lot team, which created Taco del Lago with spotted bass, was crowned champion among the 10 teams that qualified for the finals by winning their regional events held across the state.

“We used spotted bass caught yesterday (the day before the finals) and cleaned,” said Andrew Harp, head cook on the team from Lake Martin. “They’re fresh. We took a flour tortilla, topped it with shredded cheese and put it on the grill to melt the cheese. We love the grill taste. The base is Conecuh sausage, followed by the fried fish. We use a Zatarain’s fish fry with a little added spice. Then we top that with a custom slaw with green and red cabbage. Then we drizzle Sriracha mayo and cocktail sauce on the top. And we top that off with a lot of love.”

Although the competition was stiff, with a variety of dishes across the wild spectrum – venison, elk, wild hog, catfish and wild turkey – Harp was confident in the team’s dish.

“It was extremely exciting,” Harp said. “It was nice to be validated with a trophy. We didn’t come here to lose.”

Harp’s team had been participating in the Wild Game Cook-Offs for years, preparing dishes made to ensure the spectators didn’t leave the event hungry. The 2022 regional competition was the first time they got serious about the contest.

“At Lake Martin, we decided to enter something fun, and it won,” Harp said. “We entered the same dish in the finals, so that taco is undefeated. Where this recipe starts is the only thing in that taco that really matters – the Lake Martin spotted bass. Let me tell you where you catch them. Right in the mouth.

“The best time to catch spotted bass is in the spring when they’re going to bed. But in August, they’re extremely difficult to catch. But we did catch enough fresh fish the day before the finals. We caught them at night on lights. We use underwater lights, which attract bait fish, and the big fish come down below.”

“When we clean the fish, we drop the fillets in buttermilk,” Harp said. “When we get ready to fry the fish, we take them out of the buttermilk and dust them with the Zatarain’s fish fry. We drop them in the peanut oil at 350 degrees and fry them until they’re golden brown.” 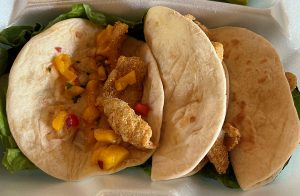 While the fish is frying, Harp takes a small flour tortilla and sprinkles it with cheese and places it on a hot grill. Leave the tortilla on the grill only long enough to melt the cheese, about 10-15 seconds. The tortilla will become tough if grilled too long.

The Conecuh sausage is butterflied and placed on the grill. When the sausage sizzles, it’s ready to go.

“My marketing assistant, Brooklyn George, made the slaw at the Cook-Off,” Harp said. “She took half and half shredded red and green cabbage, sliced bell peppers, sugar, black pepper and the Greek yogurt and combined. You have to be careful about the amount of yogurt you use. I don’t like a lot of moisture in my slaw on fish tacos. Just a splash or two of apple cider vinegar adds just little more acidity. We didn’t use any onions at the event, but sometimes I will add onions to the slaw. If you want the leftover slaw as a side, add a little yogurt to make it a little wetter.

“We used already bottled Sriracha mayonnaise and cocktail sauce. When I make my own cocktail sauce, I use ketchup, horseradish, Worcestershire sauce and Tabasco to taste. I use one run of the mayo and about a teaspoon of cocktail sauce for each taco. It doesn’t take much.”

Harp admits the winning taco was not developed by trial and error. It actually came about by mixing random ingredients after he and his brother, Dustin, had finished a day of Lake Martin bass fishing.

“Everybody I’ve talked to has never seen or thought about putting Conecuh sausage in a fish taco,” he said. “I can tell where this came up one day. This spring my brother and I caught some fish, and 99 percent of the time, when we eat fish, it’s the day we catch it. We catch them, clean them and dip them in buttermilk. At the Lake Martin Cook-Off, we cleaned them about two hours before we cooked them.

“My brother and I were frying fish one night, and we had just randomly thrown some Conecuh sausage on the griddle as an appetizer. I looked at Dustin and said, ‘Let’s make fish tacos. We can put the tortillas on the griddle. Let’s just do something different.’ With those Conecuh sausages laying around, I threw one on the bottom of the taco. That was the first time I’d ever made it. The Lake Martin Cook-Off was the second time I made it, and the state finals was the third time.”

Harp said Taco del Lago likely will be retired from competition because he has something else in mind for next year.

“We’ll probably have some Lake Martin bass there to taste, but there’s a 99 percent chance the next dish will have alligator in it,” he said. “Gator is a real clean white meat, and it tastes good too. What might taste good is gator and Lake Martin bass in the same dish. I might do that.”

“The key is the fresh bream,” Hall said. 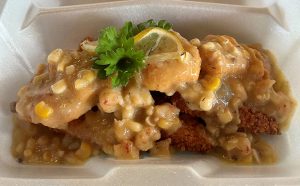 Curt Green of the Cut-Ups said their preparation started just like Harp’s.

“We took fresh-caught spotted bass and filleted them,” Green said. “We coated the fillets in Zatarain’s fish fry and fried them.

“We made our Pontchartrain sauce with cream of mushroom soup, onions, cream-style corn, shoepeg corn, crab boil and some other Cajun seasonings. We also put crawfish tails, shrimp and crab meat in it. Depending on how much you want to make, you start with one can of each and add a capful of liquid crab boil, which is a different flavor most people don’t understand. Then we add a tablespoon of Tony Chachere’s.”

The day before the event, the team prepared jalapeńo cheese grits, placed them in a bread pan and chilled it overnight.

“We cut squares of grits cakes, dipped them in egg wash and rolled them in Panko bread crumbs,” Green said. “We fried the grits cakes and put the fried fish on top and poured the Pontchartrain sauce over all of it.”

Trust me, it was delicious.

If you missed the state finals, the AWF Wild Game Cook-Off regionals crank back up this fall. The first event is on September 15 at the Birmingham Zoo. Visit www.alabamawildlife.org/wild-game-cook-off/ for a list of upcoming events.