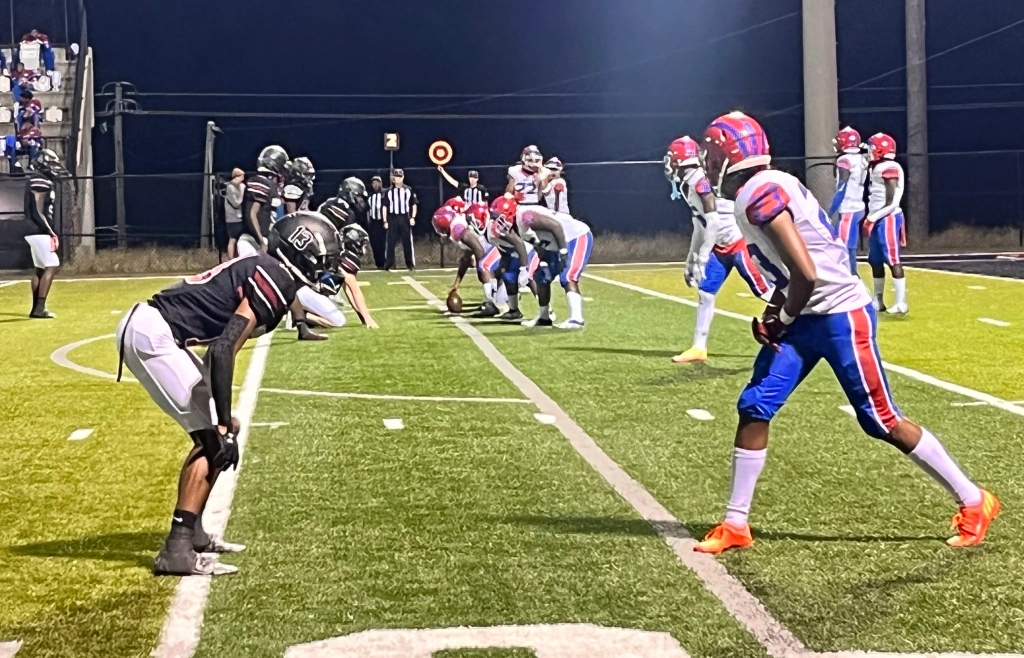 The Center Point Eagles clinched a playoff berth with a win over Shades Valley, Friday, September 30. Photo by John Goolsby

By John Goolsby, Special for The Tribune

IRONDALE — The Center Point Eagles went on the road and pulled off a huge 36-20 region win at Shades Valley. With the victory, the Eagles secured a trip to the playoffs in their first year in 6A. 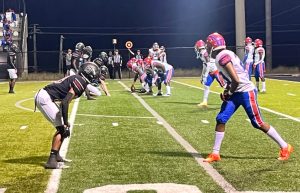 The Center Point Eagles clinched a playoff berth with a win over Shades Valley, Friday, September 30. Photo by John Goolsby

The Eagles’ powerful offense was led by senior running back Troy Bruce, Jr. Bruce came into the game averaging 147 yards per game and having scored 14 touchdowns. Bruce rushed for 225 yards on 13 carries and accounted for all five Center Point touchdowns.

Bruce was pleased with his performance. “It was a great game for me thanks to my teammates, offensive line, and coaches,” he said. “We had a great week of practice and we were able to come out and play fast and physical.”

The Eagles struck quickly on a 69-yard touchdown run by Bruce. Senior quarterback Jabari Collier converted the two-point conversion, and the Eagles led 8-0 before most fans were in their seats.

Shades Valley was unable to generate any offense and was forced to punt the ball away on their first series.

The Eagles took over at the Valley 27-yard line after a short punt. Two plays later, Collier connected with Bruce for a 13-yard touchdown pass that extend the lead to 15-0 with 8:23 remaining in the first quarter.

On Shades Valley‘s next possession, the Mounties moved the ball to the Eagle 32-yard line, but the drive stalled, and Valley turned the ball over on downs with 4:35 remaining in the first quarter.

During Center Point’s next series, the night’s most controversial play occurred. Senior linebacker Malique Steele appeared to score on an Eagle fumble recovery. After an official’s conference at midfield, Bruce, the ball carrier, was ruled down and the Eagles retained possession of the ball.

Collier completed a 57-yard pass on third down to keep the drive alive. Bruce scored on a 2-yard run, and after a successful PAT, Center Point pushed their lead to 22-0 with 2:27 remaining in the first quarter.

On the Mounties’ next series, quarterback Steve Brown connected with Korda’e Harper for a 70-yard gain to the Eagles’ 8-yard line. The drive came to an end when Brown threw an interception at the goal line with 39 seconds remaining in the first quarter.

The two teams traded punts over the next two series.

Center Point’s next drive saw the Eagles pick up a crucial third down conversion on a 39-yard completion. The Eagles steadily moved the ball down the field, and Bruce scored his third rushing score of the night on a 15-yard run with 4:35 remaining in the half. After the successful PAT, Center Point led 29-0.

Shades Valley moved the ball to the Center Point 6-yard line but once again could not get the ball in the end zone and turned the ball over on downs with 1:01 remaining in the half.

On the first play of the ensuing Center Point possession, Bruce ripped off a 94-yard run for his fifth touchdown of the night, and the Eagles led 36-0 with 45 seconds remaining in the half.

The Mounties were again able to move the ball deep into Eagle territory. The drive reached the 10-yard line, but the Mounties could not come away with any points and headed to the locker room trailing 36-0.

The biggest play of the 3rd period was an interception by Shades Valley’s Kendall Odom who returned the ball to the Eagle 49-yard line. However, neither team could generate any offense, and the two teams headed to the fourth quarter with the Eagles holding a 36-0 lead.

The Mounties finally got on the board with 8:05 reminding in the game with a 9-yard strike from Brown to Korda’e Harper. Jair Aguilar converted the PAT, and the Eagles’ lead was cut to 36-7.

The Mountie defense held the Eagles short off a first down and forced a punt.

The Mountie defense once again forced an Eagle punt.

With 29 seconds remaining in the game, Bolden connected with sophomore receiver, Ji’Quez Daniel with an 8-yard pass in the back of the end zone for a score. The PAT was good and the score stood at 20-36.

Head coach George Bates was excited about the win. “It was a huge win for us,” he said. “We’ve been told since December we couldn’t compete in 6A. To come out and clinch a playoff birth in our first year in 6A is huge for our community. It is a testament to the hard work of our players and coaches.”

Mountie head coach Rueben Nelson, who saw his team come away from the Eagle red zone four times without a score, was pragmatic about the game. “Center Point was the better team tonight,” he said. They beat us in every aspect of the game, and we just have to get better.”

Center Point hosts Pinson Valley in another huge region game next week. “Pinson is only seven minutes away from us, and we have them at home,” Bates said. “We are going to enjoy this, but then go get ready to improve our seeding.”

Shades Valley will host Pell City in another Region 6 matchup.