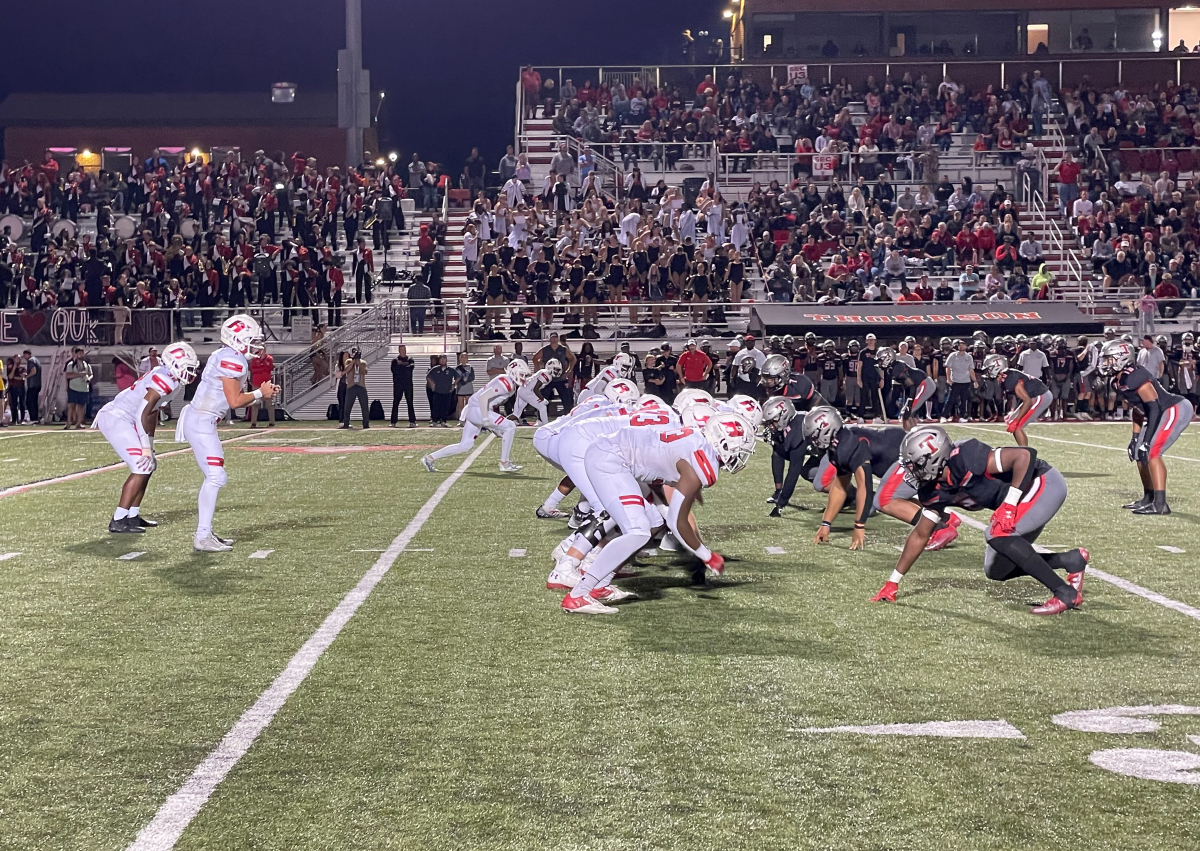 The Hewitt Trussville offense, led by quarterback Peyton Floyd, lines up against the Thompson Warriors. Photo by Bobby Mathews.

By Bobby Mathews, For The Tribune

Hewitt-Trussville went into halftime leading against defending 7A state champion Thompson, but the Huskies couldn’t hold on, giving up 14 second-half points and falling 14-12 despite a ferocious comeback attempt. 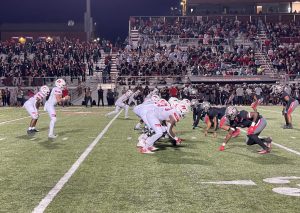 The Hewitt Trussville offense, led by quarterback Peyton Floyd, lines up against the Thompson Warriors. Photo by Bobby Mathews.

The Huskies (4-3, 2-2) outplayed Thompson (5-2, 4-0)in the first half, forcing a pair of turnovers and using two long scoring drives to stake themselves to a 6-0 lead at halftime. But the Warriors proved that, even slightly diminished, they are still at the top of the class in 7A Region 3.

Thompson’s AJ Green lost the ball on the Warriors’ first possession, and Jadon Cantley recovered the ball at the Hewitt-Trussville 32 to give the Huskies possession.

“That’s the type of game where it’s like … it’s been two or three plays that have been the difference in the game,” Hewitt-Trussville head coach Josh Floyd said after the game. “But again, our kids battled. It’s not going to be easy, but we’ve got to bounce back. We’re going to play somebody really good next week (Vestavia) and we’ve got to bounce back and try to keep going.”

The Huskies defense forced a punt on the Warriors’ next possession and Floyd again led the Huskies on another long scoring drive. Rigg capped the 13-play drive with a 22-yard field goal with 7:30 left to play in the first half.

Coming out of the break and leading 6-0, the Huskies’ Alijha Gardner recovered a pooched kickoff to keep the ball away from Thompson. The Huskies fumbled to end a promising drive at the Thompson 5-yard line.

Thompson quarterback Zach Sims hit Korbyn Williams over the top on an RPO play-action for a 48-yard touchdown with 9:26 left in the third quarter to tie the game at 6, and Kahnor Hughes added the point after to officially give the Warriors the lead, 7-6.

After that, it was tough sledding for Hewitt-Trussville. Floyd threw an interception to Kelby Taylor in the third quarter and then tossed a pick-six to Thompson safety Antuon Fegan, who returned the ball 30 yards to put the Warriors up 14-6 with 11:45 left in the fourth quarter.

With their backs to the wall, the Huskies responded as Floyd led Hewitt-Trussville on another long drive, this one a 14-yard scoring drive that started at the Hewitt-Trussville 20 with 6:04 left in the game and hinged on an 11-yard completion to Jacob Serena on fourth-and-four to keep the drive alive. On first-and-goal from the four-yard line, Floyd went right up the gut of the Thompson defense to score with 1:37 left in the game to pull to within two points, 14-12.

But the magic had run out for the Huskies. Floyd’s two-point conversion attempt was no good, and the ensuing onside kick was recovered by Thompson.

The Warriors then ran out the clock to preserve the victory.