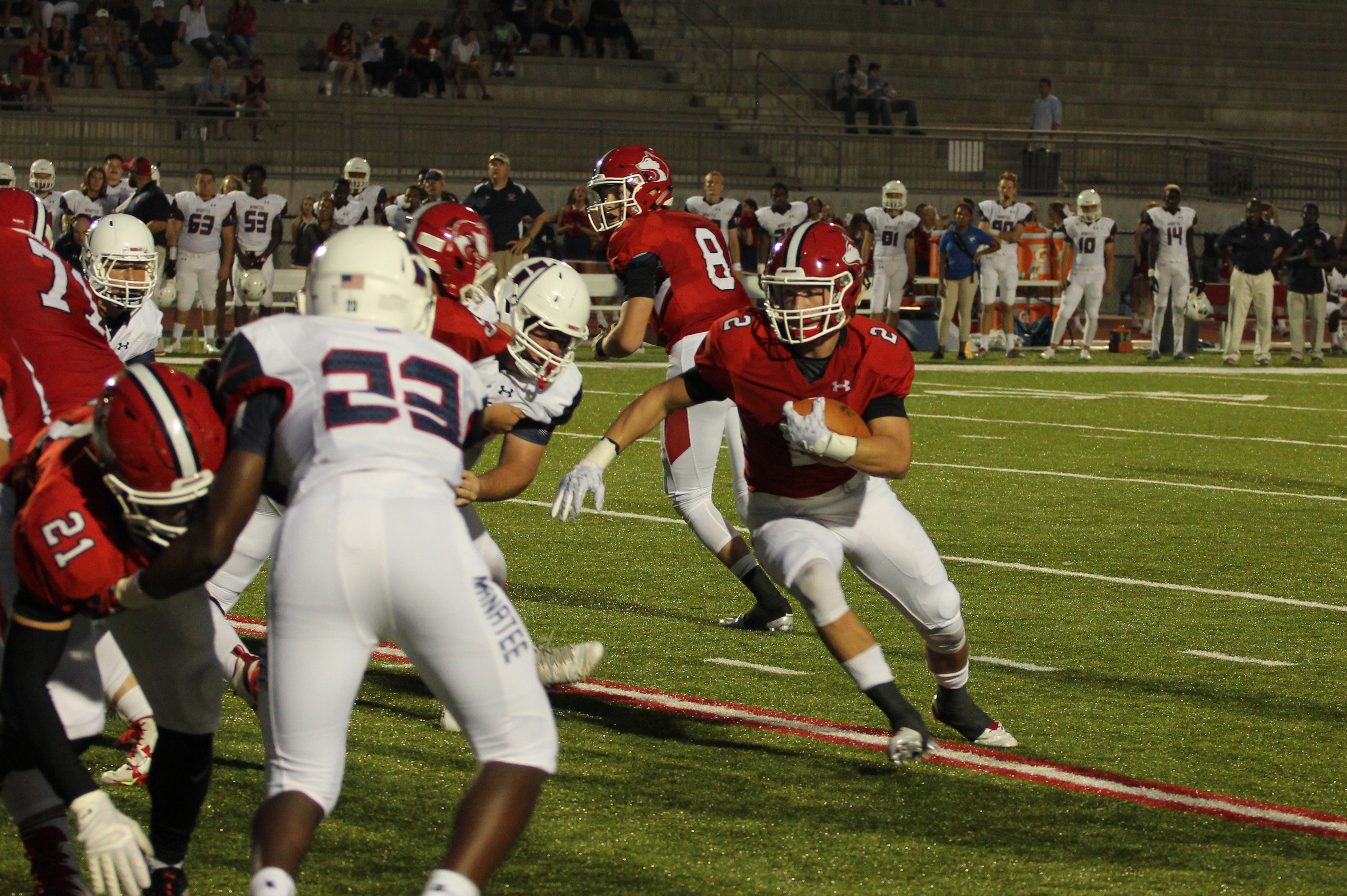 The Huskies Grayson Cash lit up the scoreboard with six touchdowns on Friday night. Photo by Scott Buttram/The Trussville Tribune

TRUSSVILLE — Hewitt-Trussville blew out a highly regarded team from Florida and nearly blew out the scoreboard lights in the process.

The Huskies (2-0), behind six touchdowns from Grayson Cash, withstood a storm of offense from Manatee’s Hurricanes and posted a 78-56 win Friday night at Hewitt-Trussville Stadium.

“I didn’t expect (six touchdowns) Cash said. “It was crazy. The whole offense played great all night. Everybody did their job.” 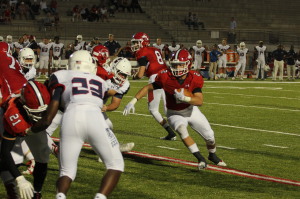 The Huskies’ Grayson Cash lit up the scoreboard with six touchdowns on Friday night.
Photo by Scott Buttram/The Trussville Tribune

Coach Josh Floyd said, “I’ve had a few games like this. It doesn’t mean neither one of these defenses aren’t any good. Sometimes, it’s just  one of those nights. That’s what I thought this was for both offenses. They’re talented. They can throw and catch the ball.”

If you had no dog in the fight, it was an entertaining evening of high school football between Alabama’s sixth-ranked Huskies and Florida’s eighth-ranked Hurricanes.

For example: Hewitt kicked off to Manatee midway through the second quarter. The Hurricanes watched the ball bounce toward the goal, and walked away, apparently expecting the ball to roll into the end zone for a touchback. But the ball reversed its spin and was dying inside the 5 when Sir Williams dashed back to pick it up. The Huskies had a fabulous opportunity to nail him deep in his territory. But Williams broke free and returned the ball all the way to the Hewitt 42.

With great field position, the Canes gave it all away in a hurry, as A.J. Colagiovanni was intercepted by the Huskies’ David Acfalle, who returned it 55 yards for a sudden reversal of fortunes.

Another example: The Huskies were sitting on the Manatee 26, facing a fourth-and-16. The Huskies were penalized 10 yards, but Manatee coach John Booth chose to take that situation over a third-and-26. Huskies quarterback Connor Adair found Cash wide open for a 26-yard TD pass.

Another example: Well, we should’ve known this was coming when Manatee misplayed the opening kickoff, allowing the Huskies to recover and set up at the visitors’ 26. Parker Colburn’s 29-yard field goal gave the Huskies a 3-0 lead.

But that was just the start.  A wacky, see-saw first half took an hour and 48 minutes to play. When the clock hit all zeros, Hewitt-Trussville held a 47-34 lead.

The halftime stats were astounding. Many offensive coaches would salivate if their teams could do this well against air.

Manatee racked up 18 first downs with 308 yards of total offense. Colagiovanni went 7-of-13 passing for 102 yards and two scores. The Canes rushed for 179 yards, 115 by Josh Booker, the Sarasota transfer, and 103 by Tarique Milton. MIlton also passed three times, completing one, for 27 yards and caught four passes for 66 yards and two TDs.

Meanwhile, the Huskies were rolling too.

If no players needed to launder their jerseys at half, the referees were obliged to run their hankies through the heavy cycle. Manatee was whistled for 11 accepted penalties for 103 yards and the Huskies took the backward walk nine times for 110 yards.

“Our offensive line really got after them. Grayson’s great player for us, he’s just a big-time weapon. But it always starts with the offensive line, they did a great job,” Floyd said.

Manatee seemed to be out of gas after the half, and the Huskies had no interest in lighting a match, just to be on the safe side.

The Huskies took the second-half kickoff and slowed the tempo, mixing runs and throws and converting a fourth-and-8 that led to a 28-yard field goal by Colburn to stretch the lead to 50-34 with 5:59 left in the third quarter. That was the third quarter’s only points.

The Canes were hit with another holding call on the next drive, but Colagiovanni overcame it with a 33-yard completion to Jernard Porter on a second-and-17 all the way to the Huskies’ 37. Another personal foul backed the Canes back to midfield, and they punted on fourth-and-25.

The Huskies then mounted a drive that spanned the end of the third quarter and the the start of the fourth. An Adair-to-Logan Pitts pass of 26 yards set up Cash’s 15-yard TD run that culminated an 80-yard drive. The Colburn PAT made it 57-34 with 10:43 remaining.

Manatee managed a TD with 7:10 to play and converted a two-point conversion, but a scrimmage play later, Cash went 47 yards for another Hewitt touchdown, and his fifth of the night. The PAT made it 64-42  with 6:55 left.

Colagiovanni led the Hurricanes back down to another score with just under five minutes to play and again completed a two-point pass to cut the score to 64-50.

Hewitt recovered the onside kick and Igbinoghene broke through the defense for a 23-yard TD run, and Colburn’s PAT made it 71-50 with 2:47 to play.

Colagiovanni got his team back into the end zone with a 14-yard TD pass to Shane Hooks with 1:08 to go. A two-point play failed, and that left it at 71-56.

But Hewitt recovered the onside kick, and Cash smashed loose for his sixth TD of the game with a 40-yard run. The extra point gave Hewitt the 78-56 win.

Hewitt travels to Gadsden City on Friday for the region opener.