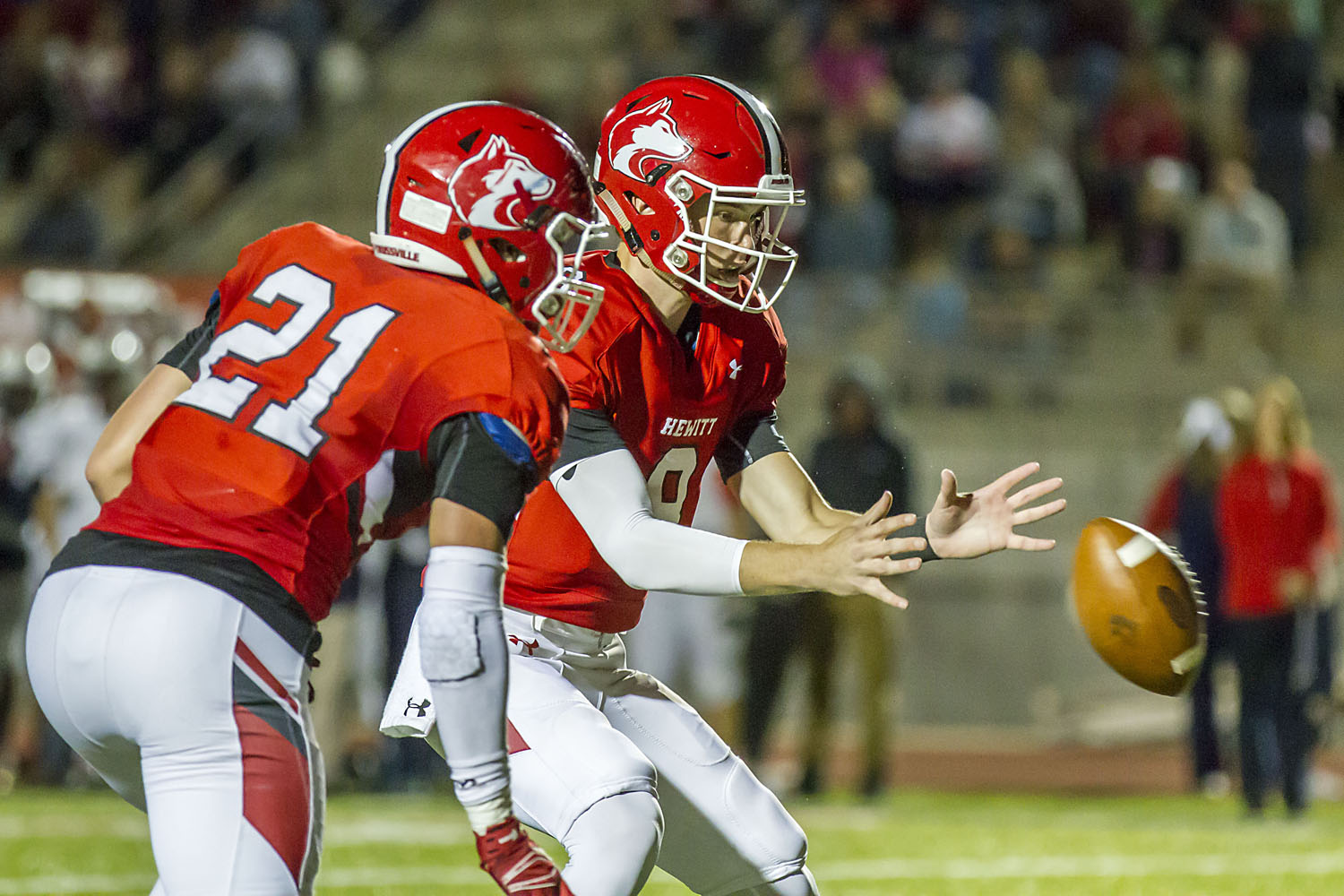 TRUSSVILLE – Like heavyweight boxers, Hewitt-Trussville and Bob Jones stood toe-to-toe until the Huskies finally punched the Patriots out in a 59-49 Class 7A meeting of top 5 teams Friday at Hewitt-Trussville Stadium.

The third-ranked Huskies improved to 7-0 and just as importantly knocked off the fifth-ranked Patriots (5-2) to gain the upper hand in Class 7A, Region 4. The Huskies are now 4-0 and the Patriots are 3-1. 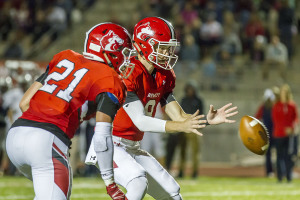 Connor Adair (8) and Elliott McElwain had a big offensive night for the Huskies,
Photo by Ron Burkett/The Trussville Tribune

Hewitt-Trussville rallied from touchdown deficits three times in the first half as it looked like the Patriots would run away with it early.

But Hewitt rode the Elliott McElwain “E-Train” to answer quickly. Connor Adair passed to McElwain for gains of 9 and 16 yards, then the junior running back ran for another 9 yards. Adair connected with Christian Stewart for a 14-yard pickup before McElwain sped 13 yards for the touchdown that tied the score with Parker Colburn’s extra point.

But Anderson took a pass from Polson and went 64 yards to set up his own 1-yard run as Bob Jones pulled ahead 14-7 just five plays later.

A sequence of a Husky punt and three exchanged fumbles set Hewitt up at the Pats 17, and Adair found Logan Pitts for the TD pass. Colburn added the PAT to tie it at 14.

But the Pats responded with a two-play drive – most of it on Polson’s 64-yard bomb to Damontrez Brown – to take a 21-14 lead with 24 seconds left in the first period.

Grayson Cash, who had another big night running the ball – scored on a 1-yard run from the wildcat to tie it up with 7:39 before the half.

If there was a turning point in the game, it came over the next six minutes of play, spanning the half.

Bob Jones connected on a TD pass from Polson to Milkhi Stewart to Brown, but it was ruled as two forward passes, and carried a loss of down. The Pats punted with 4:10 before half, and the Huskies went 54 yards — all on the ground — to take the lead for the first time. Cash accounted for 41 yards on five carries, including the final 1 yard. With 2:11 left, the Huskies led 28-21. 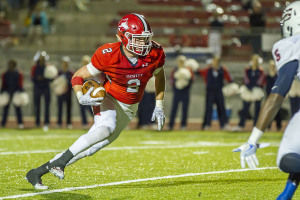 Grayson Cash scored for Hewitt-Trussville to help lead the Huskies to a win over Bob Jones. Photo by Ron Burkett/The Trussville Tribune

Bob Jones now had to play catch up. On second-and-10, Bob Jones’ Isaiah Hatchett fumbled the ball, but the Huskies tried to scoop and score and ended up knocking the ball out of bounds without controlling the football. Faced with third-and-30 at their 12, the Pats benefited from back-to-back pass interference calls. A 44-yard gainer from Polson to Stewart set up a 13-yard pass from Polson to Anderson for the game-tying score with 40 seconds left in the half.

But Adair made a big play on the next drive, scrambling from pressure to find Noah Igbinoghene for 36 yards to the 13. Colburn gave the Huskies a 31-28 lead with a 30-yard field goal with 2 seconds left.

The Huskies led from that point on.

Igbinoghene scored on the third snap on the second half with an ankle-breaking move near the line of scrimmage and then used his sprinter’s speed to finish the 55-yard run. Colburn’s kick made it 38-28 with 10:59 in the third quarter.

“That was an amazing run by Noah. We’ve just got to keep finding ways to get him the ball,” coach Josh Floyd said.

The Pats managed a touchdown drive, aided by a dead-ball personal foul that would have killed the drive, but Hewitt answered with a quick drive as the offensive line began to dominate. Cash scored from the 1 with 4:50 left in the third.

The Huskies forced a punt and marched down the field again. Cash drove toward the goal line but fumbled into the end zone. Stewart was there to fall on it for the TD, and the Huskies led by 17 at 52-35.

Polson immediately burned the Huskies deep with a 75-yarder to Brown, and a tipped pass on Hewitt-s next drive resulted in an interception.

The Pats scored on a 2-yard Polson run and converted the two-point play to close within 52-49.

But Pitts recovered the onside kick and two plays later McElwain chugged 50 yards for another TD and the final margin.

Colburn made all eight of his extra points as well as the crucial field goal.

“It was a tough ballgame,” Floyd said. “Give them credit. … We almost pulled away in the fourth quarter, got a big lead, then gave up a big play. We’ve got to get better. But I’m really proud of our guys.”

The Huskies travel to Sparkman for another region game next week.