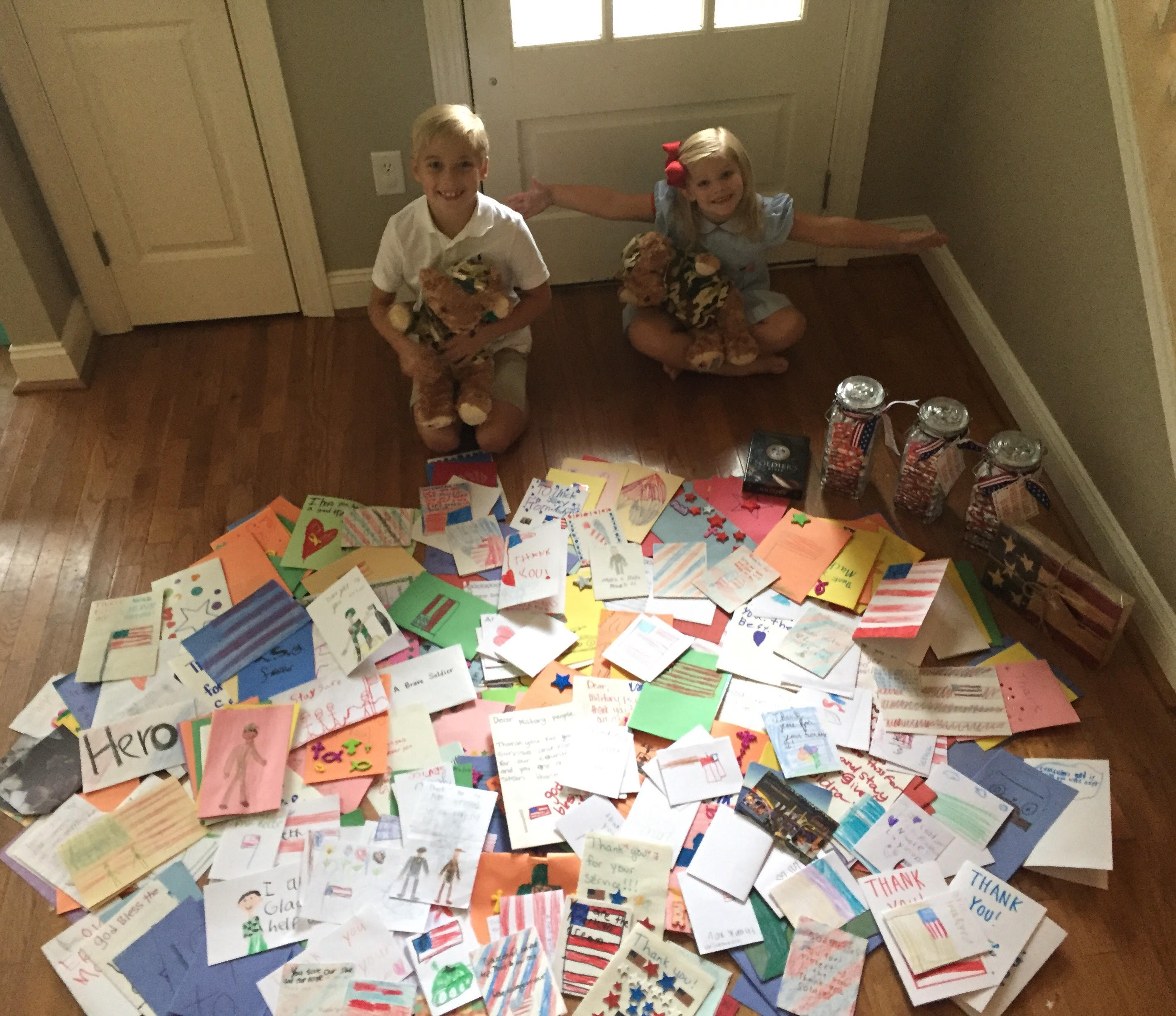 Lucien and Ramsey Kate behind a pile of more than 1,400 cards collected to send to United States Soldiers serving overseas.

TRUSSVILLE – When Lucian Nelson, 8, and his little sister, Ramsey Kate Nelson, 5, found out that their father was about to be deployed to the Middle East they wanted to collect cards for other United States soldiers serving overseas. To benefit troops abroad, the siblings collected cards for the soldiers away from home. They set out to gather 275 cards and wound up with more than 1,400. 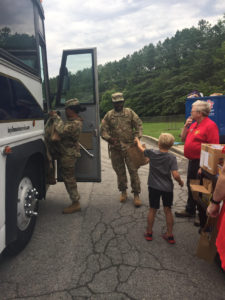 Lucian hands a goodie bag to a soldier boarding a bus for deployment. Photo by Jennifer Nelson.

Their mother, Jennifer, posted on Facebook a request for friends and family to send in cards. The mother of three is vice president of Alabama Army and Air National Guard Spouse’s Auxiliary. Two weeks after posting on her Facebook she found that word had traveled quickly online.

“It traveled far and wide,” she said. “We ended up collecting way more than we actually needed. It wasn’t just from here is what made it so amazing. It was pretty surreal. I had never expected it.”

In order to give a card to every soldier deploying from an Army National Guard unit in Birmingham, 274 cards were needed. Locally they were helped by friends and family, as well as First Baptist Church of Trussville Vacation Bible School, which donated 90 cards.

But as more and more people found out, the family eventually began receiving homemade cards from outside of Alabama, including a second-grade class in New Jersey. They received cards from Michigan, Arizona, Texas, Georgia, North Carolina and other states.

With their goal of collecting 275 cards exceeding their expectations, Nelson took Lucian over to the armory where their father, Capt. Brian Nelson, and others deployed to Kuwait. There they spent time handing out goodie bags to soldiers loading the buses. With so many left over they decided to box them and send them over where they can be given out to more soldiers.

“That was special,” she said. “That and the responses from soldiers that said how much the cards meant to them.”

The armory is home to the 135th Expeditionary Sustainment Command where Brian Nelson serves as Operations officer. Previously he was with the 20th Special Forces before transferring to ESC. His current deployment to Kuwait will be his fourth.

Jennifer said that they are still receiving cards. She said that they want to send more cards during the holidays, especially for those that don’t normally get mail. 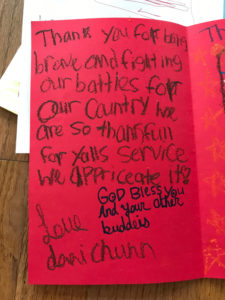 A homemade card sent by a child for the soldiers. Photo by Jennifer Nelson.

“We’re going to find out any soldiers that don’t get any packages or cards and we’re going to make sure that we write to them and send them care packages so that there’s no soldier left behind,” she said. “So, it’s kind of an ongoing project for us.”

The idea for the cards stems from her husband’s previous deployment to Africa several years ago. During a Skype conversation, Capt. Nelson showed her the inside of his tent where he had cards from children displayed.

Being away from home and family can be a rough time, even for a non-combat soldier. But getting something from a stranger showing their support can change everything.

“I think it’s really touching for them to have something special from someone they don’t know appreciating them, praying for them and supporting them,” Jennifer said. “My husband is a testament to that because he didn’t know any of the kids that sent them those cards, but that’s what lined the walls of his tent – it reminded him that people were still behind him.”