Trump to stump for Strange in Huntsville

President Donald Trump announced today he will be in Huntsville Saturday to lend his support to Luther Strange who is campaigning to keep his Senate seat. 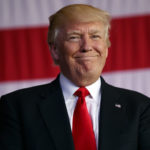 The president will make his visit to Alabama just days before the GOP runoff between Strange and Judge Roy Moore, the top candidates in last month’s Republican primary.

“I am proud to have President Trump’s endorsement in this race and I am looking forward to his trip to Alabama,” said Luther Strange in a press release. “It is an honor to work hard beside him to deliver upon his promises to the American people, like achieving tax relief for hard working Americans and building the wall on our southern border.”

Former vice president candidate Sarah Palin will be in the state this week to stump for Moore on a statewide bus tour.