Strange was appointed to the seat by former governor Robert Bentley shortly before he pleaded guilty to crimes and left the governor’s mansion in a plea bargain to make way for current Governor Kay Ivey.

That appointment brought controversy, as Strange had asked the state legislature to stop impeachment proceedings against Bentley to avoid conflict with  the attorney general’s office. After his appointment to the senate seat, Strange said he had never said his office was investigating Bentley.

Strange has the endorsement of President Donald Trump and Vice President Mike Pence. Both men have campaigned for Strange in Alabama. 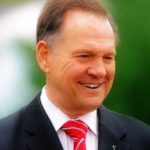 Moore told a south Alabama audience on Monday night that God had put him in the election. Stephen Bannon, former Trump strategist, campaigned with Moore.

Opinion polls have consistently shown Moore with an advantage over Strange.

Democrat Doug Jones, who made a name for himself by leading the prosecution and conviction of two Sixteenth Street Baptist Church bombers in Birmingham, awaits the winner.