BIRMINGHAM — A jury verdict Monday awarded $12 million to victims in a Max Transit bus crash that occurred in Fairfield on Feb. 9, 2015, according to a release by Alexander Shunnarah Personal Injury Attorneys, P.C. 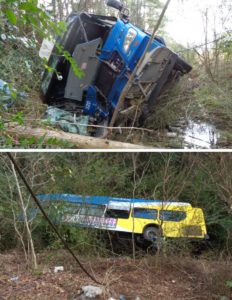 With more than 20 passengers on a MAX Transit bus route, the bus driver lost consciousness, causing the bus to overturn and land in a ravine. The lawsuit involved 15 of the crash victims, with the majority of which were represented by Alexander Shunnarah Personal Injury Attorneys, P.C. attorneys Brandon Bishop and Sara Williams.

As part of their verdict, the jury also assessed $6 million in punitive damages.

“For almost three years, the Birmingham-Jefferson County Transit Authority has failed to take responsibility for this wreck. We hope they will see this verdict as the rejection of that position by the people of Jefferson County and implement the necessary safety policies to ensure this never happens again,” said Sara Williams, Managing Attorney of Alexander Shunnarah Personal Injury Attorneys, P.C.

During the trial, there was evidence that the MAX Transit bus driver had passed out twice prior to this collision while operating a MAX bus through the greater Birmingham area. The Birmingham-Jefferson County Transit Authority, which operates the MAX Transit system, had failed to take action after these two prior fainting occurrences.

The injuries of the passengers ranged in severity, with the most severe injury resulting in Charlyse Williams losing her leg. Upon recognizing that the driver was losing consciousness, Williams rushed to the front of the bus in an attempt to prevent the collision. As a result of her selfless act, Williams’ right foot and ankle were so severely mangled that doctors were forced to amputate her leg below the knee.

“We applaud the jury for banding together and taking ownership of this community. Even though none of the jurors rely on MAX bus for their means of transportation, their verdict makes clear that everyone, including those less fortunate than them, are worthy of protection,” said attorney Brandon Bishop.

“We are thankful to this jury for holding MAX Transit and its driver accountable for their failure to avoid what was a very preventable collision. I am proud of Brandon and Sara for the hard work they have put into the case for nearly three years. We as a firm will continue to fight for the safety of not only our clients, but all of those in our community who share the roads with these buses,” said Alexander Shunnarah, President & CEO of Alexander Shunnarah Personal Injury Attorneys, P.C.