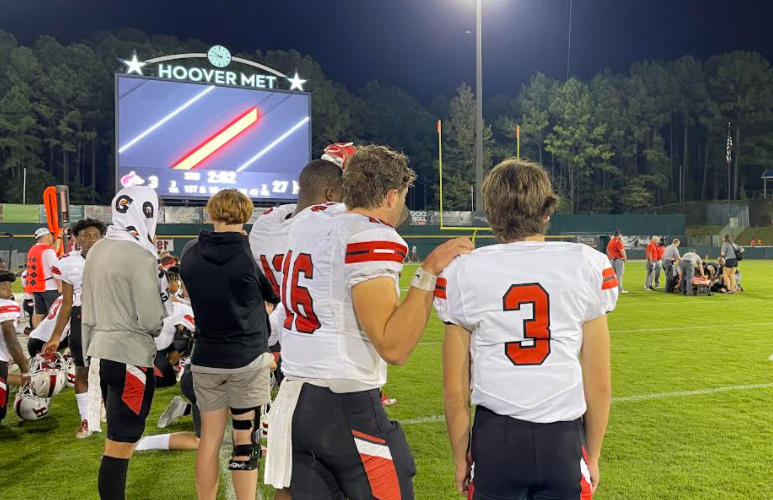 Hewitt-Trussville quarterback Cade Ott Carruth, who injured his hip in a 34-10 loss against Hoover, looks on as medical staff work on offensive lineman Kade Martin. Martin had to be stretchered off the field and was transported to UAB Hospital. The extent of his injury is not known. (Photo by Bobby Mathews)

HOOVER — No excuses. The Hoover Bucs whipped a game Hewitt-Trussville squad here 34-10 and left little doubt as to why. 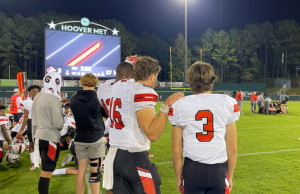 Hewitt-Trussville quarterback Cade Ott Carruth, who injured his hip in a 34-10 loss against Hoover, looks on as medical staff work on offensive lineman Kade Martin. Martin had to be stretchered off the field and was transported to UAB Hospital. The extent of his injury is not known. (Photo by Bobby Mathews)

The Bucs ran past the Huskies behind powerhouse runner Ahamari Williams, who easily eclipsed 100 yards and put the final nail in the coffin for Hewitt-Trussville with an 11-yard scamper for a touchdown with 5:35 left to go in the game. They beat the Huskies through the air repeatedly, with quarterback Bennett Meredith repeatedly finding KJ Law and Jordan Woolen to move the chains.

“It was a really poor performance on our end,” Hewitt-Trussville coach Josh Floyd said after the loss. “That’s not taking anything away from Hoover, because they did a great job. They’re really just a good football team.”

But the real story of this game may not be the final score. It may instead be a series of injuries that plagued Hewitt-Trussville in the third quarter. In rapid succession, quarterback Cade Ott Carruth was injured, followed by an injury to defensive back Riggs Dunn and, in a very scary moment, sophomore offensive lineman Kade Martin had to be taken from the field on a stretcher.

Hoover led 27-3 at that point, but the defense had begun to figure Meredith out a little. The senior transfer from Spain Park threw interceptions on back-to-back drives in the third quarter, which led to the Bucs leaning even more heavily on the fireplug-like Williams to lead the way in subsequent possessions.

The Huskies started out with momentum, scoring a pair of first downs after receiving the kickoff. On the sixth play of that first drive, though, a high snap led to a strip-and-score by Terrell Jones, who blazed 45 yards for a touchdown. After the extra point, it was 7-0 Hoover, with 9:58 remaining in the first quarter.

“We had them on their heels on that first drive, and then they get that fumble, a scoop and score to kind of take the momentum away from us,” Floyd said.

It was the start of a long night for the Huskies. The Bucs faced fourth down twice in the game and converted on both. Hoover never punted. Instead Williams ran in a three-yard score to make it 14-0 after the PAT with 3:10 remaining in the first. The Huskies got on the board behind a CJ Curtis field goal with 18 seconds left in the quarter to make it 14-3.

Trailing 20-3 with less than a minute left in the second quarter, Floyd elected to go for it on fourth-and-1. The effort failed, and Hoover scored again when Meredith hit Williams for a touchdown to make it 27-3 with 24 seconds on the clock.

“The fourth-down call before the half, that was my fault,” Floyd said. “We probably shouldn’t have done it, but if you can’t get one yard, you don’t deserve to win the football game.”