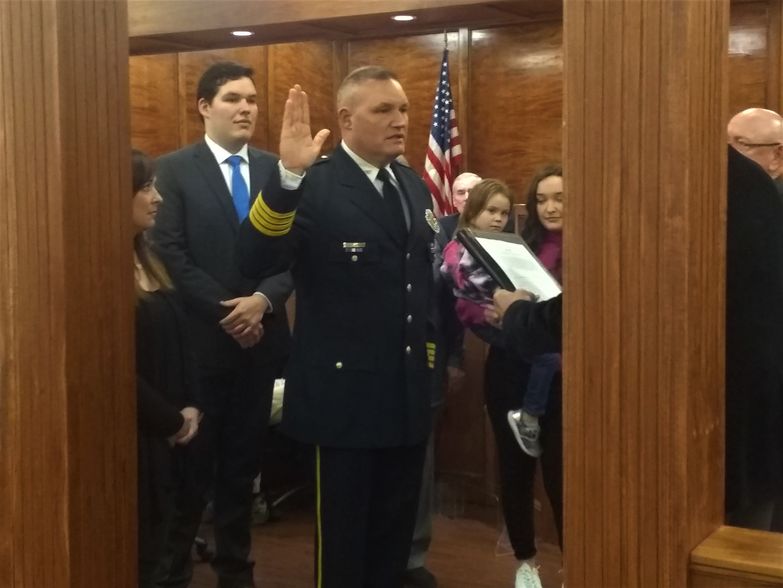 Paul Irwin is sworn in as the new chief of the Leeds Police Department. (Photo courtesy of Nathan Prewett)

LEEDS – With a background in law enforcement spanning 28 years, Paul Irwin was sworn in as the new chief of the police department during a meeting of the Leeds City Council on Monday, Dec. 20, after his predecessor, Jim Atkinson, announced his retirement at the previous meeting. 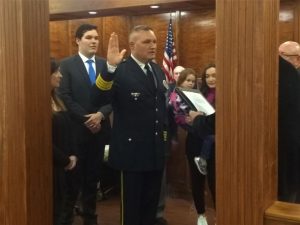 Paul Irwin is sworn in as the new chief of the Leeds Police Department. (Photo courtesy of Nathan Prewett)

“We’ve been well served for a number of years by [Jim] Atkinson, who has done a wonderful job as our chief,” Mayor David Miller said. “He’s ready to go to greener pastures, and we’ve had to find somebody to replace him. Well, we brought in a five-star. I know how our coaches feel when they get that five-star to sign on the line. And I’m really happy to introduce to you tonight our new police chief, Paul Irwin.”

Irwin comes from the Birmingham and the Pell City police departments. After he was sworn in, he spoke to the audience, expressing his appreciation to the departments he served with, and gave a message to the officers currently serving in Leeds.

“I just want to tell the officers from the Leeds Police Department that I’m going to give you a 110 percent,” he said. “What means the most to me are the officers that serve each day. The things that I cherish are the training and the professionalism that we develop and that everyone goes home safe every night.”

Irwin also mentioned that he and other officers met with employees of Academy Sports + Outdoors earlier that day, where a donation was made by the corporation that Irwin said was used to help buy gifts for children in the community. 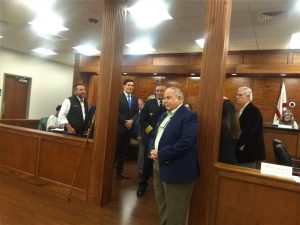 Miller reported on the recent Christmas parade, saying that the weather allowed for the event to take place and that it may have had the largest turnout of attendees.

Before the regular meeting began, the council held a public hearing to consider giving an alcohol license to Neighbors Leeds LLC, trade name Snow Cone. This is part of an effort to establish an entertainment district in the area where the Outlet Shops of Grand River.

“This is particularly significant to the city,” said Miller. “More significant than just another business getting their license. But this gives us the critical mass that’s required by law to allow the city of Leeds to form an entertainment district out at the Grand River area. And that will allow a whole lot more freedom and doing special things out there.”

Christine Szalay Strange, vice president of operations at the Outlet Shops, spoke in favor of granting the license.

“Our partnership with Neighbor has been amazing,” she told the council. “They have been strong and respectful partners. We look forward to them receiving their license and working with the city leadership to develop the parameters for an entertainment district.”

No one else spoke during the public hearing, and it was referred to the council, which approved the request unanimously. 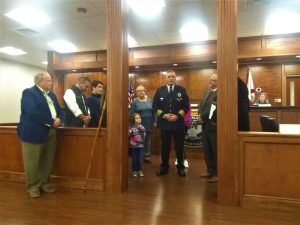 After this action was considered to authorize JMCM Consulting to write grant applications for the fire department to acquire equipment and an ambulance for medical emergencies.

Two grants will be made in which one is to buy PPE, a washer/extractor and dryer, a breathing apparatus, as well as fees for consulting. The other will be for the ambulance.

“The only ambulance service in this area that’s still responding to people’s 911 calls has to be the one we’re using, and how long they will continue doing it we’re not sure,” Miller said. “So it’s really important to have this backup capability here in [the city].”

During public comments resident, Ernest Mitchell asked about the citizen board for the Moton Center Educational Foundation that was discussed in the last meeting. Miller replied that the city is still taking nominations for citizens of Leeds to serve on the board and that they can be brought to the city clerk at City Hall.