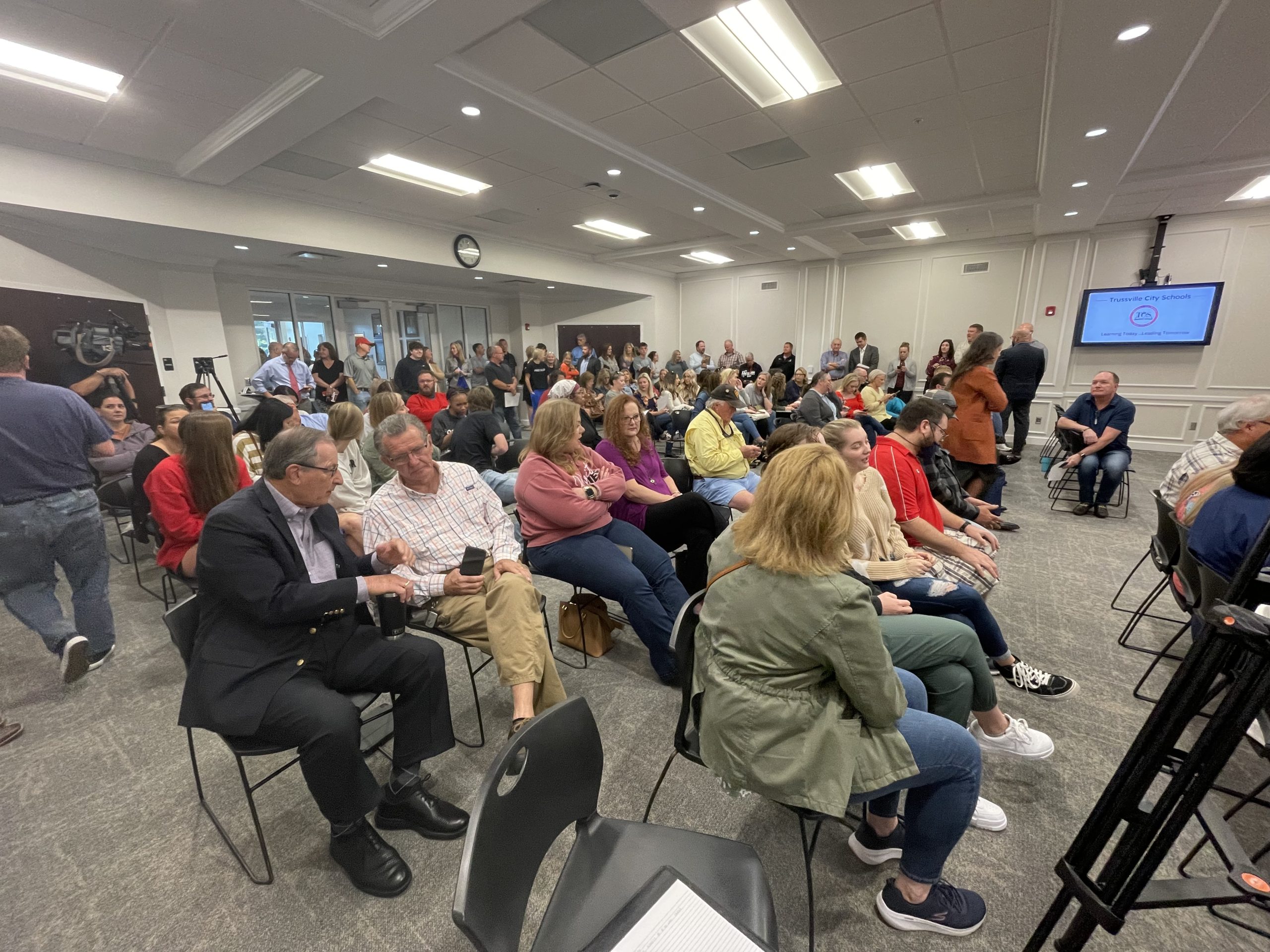 The TCS BOE board room was packed with parents sharing their concerns and thoughts about the recent events. (Photo by Hannah Curran)

TRUSSVILLE — Trussville City Schools (TCS) Superintendent Dr. Pattie Neill was placed on a 60-day paid leave of absence by the TCS Board of Education (BOE) on Friday, Sept. 30, during a special called meeting. Neill was not present at the meeting. 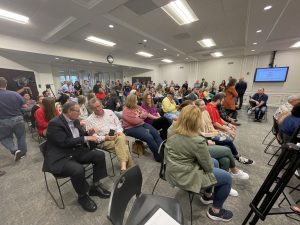 The TCS BOE board room was packed with parents sharing their concerns and thoughts about the recent events. (Photo by Hannah Curran)

“I think that we have certain issues that we need to learn about and in this situation that we find ourselves in,” TCS BOE Vice President Kim DeShazo said. “There’s been a lot of things that have come out this week, and we need to figure out and get to the bottom of those things.”

Neill will not have access to email or the building, and she would have no daily duties.

DeShazo also requested that the board seek services from outside entities that would “conduct an unbiased, thorough investigation, review, and find out the facts.” The board approved her request.

Many parents and citizens filed into the board meeting room to share their thoughts and concerns about recent events that have transpired in TCS.

Nathan Pruet, whose son was on the “Death Note” list, addressed the board, explaining that their policies need to be updated for accountability purposes.

“There’s a lot of opinions in this room about what needs to go and what needs to happen,” Pruet said. “What I’m trying to say is we’ve got to put ourselves in a position where this can never happen again. That’s where these policies come into play. The accountability will rest within your governing documents.”

Pruet told the board that he would not rest until action is taken.

“This was said earlier to me, ‘In the time of crisis, leadership leads or hides,'” Pruet said. “I’m asking you to choose leadership.”

Christy Miller also spoke to the board about implementing new ways to prevent a situation like this from happening again.

Miller told the board that this process was going to take time.

“We didn’t get here in a week, and we’re not going to fix it in a week,” Miller said. “But with open communication, we’re behind you.”

Another parent, John Iris, addressed the board, explaining that everything rises and falls on leadership.

“Over these last few weeks, we have seen the leadership in our school system fail us, and honestly, we’re not confident in the leaders who are leading us,” Iris said. “A vote of no confidence is a hard thing to talk about.”

Also addressing the board was Amber Jones, who started her comments with a 37-second moment of silence for the 37 children on the list before explaining how “awkward and unnerving” the situation has been.

“When you are expecting to hear something, and you hear silence, sweeping things under the rug, withholding information from the police and parents has to stop,” Jones said. “These actions are putting all of the students in the Trussville City School system in danger. Communication and transparency is key. It is key to a successful school system, which I believe we can have. This is our stand, and this movement does not end until we have better leadership at the school board level. Our children deserve better.”

“Dr. Neill, TCS ignored this child’s red flags in the most recent security threat; we will no longer ignore your red flags, as a superintendent or as a board,” Jones said. “Your failure to communicate, to be transparent, and your blatant disrespect towards Trussville City School employees, students and parents has not gone unnoticed and will no longer be tolerated on any level.”

Some members of TCS chose not to attend out of fear of losing their job but had community members read anonymous statements for them addressing the various problems that have occurred in TCS.

Others used the opportunity to bring to light the failures of the school system that they have experienced.

Mike Kidd told the board about an Office for Civil Rights (OCR) complaint form he filed on Feb. 4, 2022, about Trussville City Schools, to advocate for his 10-year-old Type 1 Diabetic daughter, Isabella. Kidd said that his daughter’s IEP and 504 Plan were ignored and not executed properly, putting his daughter’s life in danger.

James Thomas addressed the board about how his visually impaired daughter, Sarah Thomas, was treated by TCS and how his family had to fight for a fair and appropriate education.

“There has been a culture through the special needs program that I’d say hundreds of children have been directly hurt and punished at the direction of Pattie Neill,” James said. “My daughter, Sarah Thomas, is one of them.”

James’ daughter and HTHS student, Ellen Thomas, also spoke to the board about how corrupt the school system is.

“The problems that the schools are facing are not in the teachers or the aides or in the counselors, but in the administration and the Board of Education,” Ellen said.

During the closing remarks, Brown told the audience that the board hears them.

During an interview after the meeting, Brown said, “It was painful, but to get to something good, it has to be painful.”

The entire board meeting can be viewed below.